Shakespeare’s tale of two schemes concerning lovers – one to get a couple together, one to tear another couple apart- could conceivably happen anywhere. Jack Bradfield sets the action in a house party at the turn of the millennium, where anything might happen.

Poltergeist Theatre’s production introduces new perspectives to the characters. I liked how Hero and Claudio, who are traditionally the couple who conform to society’s gendered expectations, are the ones whose genders are played with, keeping the genders and pronouns they have in the text, whilst being played by actors and wearing clothes coded to another gender. The editing of the play blends this all together, as Claudio’s rant at the altar focuses more on the infidelity he believes Hero to be guilty of, and is less directly misogynistic, which might have felt weird coming from someone in a skirt. In addition, I enjoyed the addition of a redemption arc for Margaret when she realises her complicity in the shaming of Hero.

The cast was very strong. Alice Moore’s Beatrice was sharp and had a wide range of comic facial expressions, and Adam Goodbody’s Benedick was the least cocky I have ever seen him, even vulnerable in his love at times, and together, they make a touching couple. Benedick’s other important relationship, his friendship with Claudio. Is also well played, from their camaraderie at the beginning to seeing the conflict of issuing or receiving the challenge to the duel. Georgia Figgis plays Claudio in many states-excited in love, drunk, angry, upset- and the sadness she brings makes you feel sympathy for him, at least until he very convincingly rages again. Another standout for me was Lillian Bornstein’s Don Pedro, who looked utterly heartbroken after Beatrice refuses his marriage proposal.

Design wise, it’s tied together well. Both Georgia Bevan’s costumes and Adam Marshall’s lighting revolve around winter greens and rich purples, set against the white snow and plainer bases to the costumes. The transitions between scenes often resemble fast-forwarding in a video, keeping with the video theme in a stylised and polished way. Many a time a character is seen with drugs, a glass, or a bottle, which seems to motivate some of the more extreme reactions. The music, an original soundtrack by Alice Boyd, is melancholy, and the haunting rendition of Sign No More is particularly beautiful.

One thing emphasised in the marketing was the use of live-streaming and television. The major use of the live feed is when policemen Dogberry and Verges, perform to a handheld video camera, which shows on screen. This is an inventive way of allowing their actors, Imo Allen and Marcus Knight-Adams, to double as villains Conrad and Borachio, but the scene where the constables capture the criminals, repeatedly passing the camera between them, did seem a little clumsy. The television is also used in other parts of the play, to be played with, or for comic effect or for exposition. Its use would be greatly improved by ensuring that the audience could always see what was happening on screen- either by having a second screen that the actors didn’t interact with, and was only there for the audience, or simply by having the actors moving around instead of sitting or standing still in front of it.

The other thing that was conveyed in the marketing was the edgy perspective they would take on the play- the “death” of Hero and Benedick’s challenge to Claudio are emphasised. I was expecting a darker tone than what I normally expect from a Much Ado…-but this production went beyond my expectations. Yes, there are moments of pure comedy, such as the scene when Benedick is tricked into believing Beatrice loves him, and the unexpected audience participation, but it’s a lot darker than something often played as a rom-com is. The editing of the script focuses on the sad, angry, and tense moments, and even the very last line -drawing attention to the Prince’s failure to find a wife- leaves you with a sombre mood.

If you’re going hoping for a cheery, fun, or romantic night, this is play not for you. However, if you’re going for Shakespeare performed very differently, or something to play with your mood, or a uniquely brilliant interpretation of a classic, Poltergeist’s Much Ado… is one to watch. 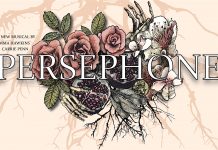