For a certain generation, Chris Tavaré’s name is synonymous with blocking. The former England opener frustrated the great Australian and West Indian bowling attacks of the early 1980s with a series of obdurate innings, and could be relied on to wear down an opposition not by flaying them to all parts of the ground, but by going hours on end without scoring.

But this was not always the case. Batting at three or four for Oxford and his county side, Kent, Tavaré was more than capable of scoring quickly, and taking a game away from the opposition. Indeed, despite winning sixty caps, Tavaré was rarely given the opportunity to prove his worth at the top level, and was arguably disposed of too quickly.

“I knew my limitations,” he tells me. “I didn’t mind opening, but I liked batting three more – it means you have the fifteen, twenty minutes I needed to get focused and get my thoughts clear.

“But at that level, I was just happy to be picked and playing.” Indeed, England’s batting line-up of Tavaré’s era was littered with greats, from Mike Gatting to Graham Gooch “I was very lucky to be surrounded by such talented players,” he says.

Tavaré made his Kent debut the same year he matriculated at Oxford, playing a handful of first-team games, but it was at the University that his career really kicked into gear. In 1975, he played alongside future Pakistan captain Imran Khan, who had already made his international debut by that point, in a Blues side filled with future professionals. “It was really important to have players like Imran in the side, because you really looked up to them,” he says. “For people like me, the younger players, they showed what was possible, and [their presence] meant that we were much more competitive.”

Whereas the Blues now play other university teams and various club sides for most of their season, in the 1970s university cricket was thought of in a higher regard. Currently, counties typically treat their early-season friendlies against Oxford and Cambridge as little more than glorified practice matches, but in Tavaré’s era, a Combined Universities side used to enter the domestic one-day competition, the Benson and Hedges Cup, and counties took the games extremely seriously.

“They turned up with their best team, so we were always going to be the underdogs,” says Tavaré. “We beat two of them in ’75 – Worcestershire and Northants – and my recollection is that Imran played a huge part in both games.” Tavaré’s recollection serves him well: against Worcestershire Imran took 4-4 and top scored with 35, while managing an unbeaten 61 in the Northants win. But it was 1976 that proved to be his best year in an Oxford shirt. After missing out on the captaincy to his good friend Vic Marks, he had “his best year of the three,” with the bat, and top scored in the Varsity win at Lord’s with a first-innings 99. “[Varsity] was the big fixture for Oxford students, and it was at Lord’s. The combination of the two made it a really important tense sort of game.

“I was absolutely furious!” he jokes when I ask if he was disappointed that Marks was given the captaincy ahead of him, before admitting that “he was obviously the much more appropriate candidate.”

Following a drawn Varsity match in 1977, Tavaré graduated with a zoology degree, but went straight back to the professional game, having played for Kent throughout his time at Oxford. It was only four years later when he found himself making his England debut against a West Indies side featuring the feared pace quarter of Michael Holding, Joel Garner, Andy Roberts, and Malcolm Marshall.

“I was terrified! I batted at the end of the day and it was almost unplayable. We came back the next morning and it was bright sunshine – the conditions were in my favour.” Tavaré managed to top score in that game, making an unbeaten 82 in a team total of 174 all out. “Getting off to a good start and getting that bit of confidence was great,” he says, “but you never felt at that level, certainly for people of my level, that you’d actually  made it.”

The year after, Tavaré made 69 and 78 in the Ashes win at Old Trafford, and he counts the Saturday of that Test as his career highlight. He stood at the non-striker’s end watching Ian Botham compile a 102-ball 118 to take the game away from the Australians, an innings he describes as “just amazing. The crowd’s reaction when he started hooking [Dennis] Lillee for six – it was a real hairs standing up on the back of your neck moment.”

While he was in and out of the team for much of the rest of his career, Tavaré toured Australia in 1982/83, and despite some level of personal success, the tour ended in a 2-1 series loss. “It was tough,” he tells me.

“Like the other tours I did, we went 1-0 down. It’s really hard to battle back into a series from there. When you go 1-0 down, the cricket gets really pressured – there wasn’t much sledging, but the pressure was there.”

I ask him how the current England side can learn from previous tours, and he says that Joe Root’s team “have got to get off to a good start.

“They need to win one of the first two Tests, and the key over there will be the bowling. You’ve got to get twenty wickets, and knock over good players. If you can keep their scores down to reasonable levels then I think our batting line-up will be ok. But if they go getting 400-450 regularly, then you’re going to struggle.”

Given England enter the series with a flaky batting line-up on paper, it is easy to wonder what Trevor Bayliss would give to have a player in Tavaré’s mould in the middle order: while some find his style frustrating, there will always be a place for the blocker at Test level. 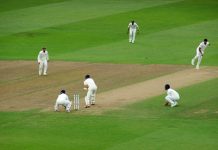