Few films have had as tumultuous a history as Blade Runner, Ridley Scott’s seminal 1982 sci-fi thriller. After a nightmare shoot on which Scott made enemies of many of his collaborators, the film opened to indifference from U.S. audiences and outright hostility from critics, garnering accusations of thin plot, glacial pacing and over-reliance on spectacle. Time and re-edits, however, have seen a dramatic reappraisal on par with Kubrick’s most infamous, and the film is now deservedly hailed as a masterwork, as well as one of the most singularly influential sci-fi movies of all time. Now, with a sequel on the horizon, the British Film Institute are re-releasing the film in cinemas throughout the country, and there’s never been a better time to get onboard. Blade Runner is a film that demands to be seen in as immersive an environment as possible.

The film is an adaptation of Philip K. Dick’s 1968 novel Do Androids Dream of Electric Sheep, though rather loosely. Neither Scott nor screenwriter David Peoples read the novel during production, and the film (with its title borrowed from a totally unrelated book) was informed more on a thematic level than by the intricacies of the plot.

Set in a neon-lit, shadowy Los Angeles of 2019, the film stars Harrison Ford as Rick Deckard, an ex-cop (the titular “Blade Runner”) who gets pulled out of retirement to track down and kill a group of replicants (human-created android worker-slaves, designed to look indistinguishable from adult humans) who have escaped from an off-world colony. There’s also a woman. If this is sounding very similar to another specific genre then you’re not far off the mark. Film Noir is a heavy influence on both the structure and mood, from Ford’s morally dubious anti-hero to the pervasive first-person narration that frames proceedings in the original edit. 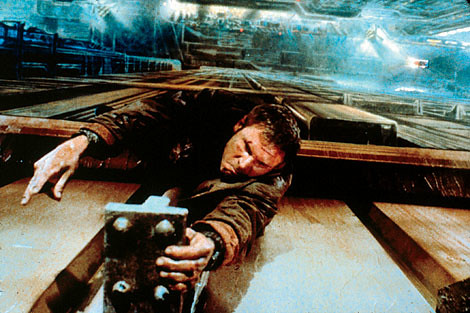 Doubtless this voiceover contributed in no small way to the film’s initial negative reaction. It was imposed (along with a contrived “happy ending”) by the producers when they seized artistic control in post-production and after preview screenings in which the audience complained the film was hard to understand. Both of the original screenwriters hated it, as did Ford (who remarked that it was written by “clowns”), so much so that a rumour even begun among fans that he had purposely delivered the dialogue inadequately, hoping it would have to be cut from the film. These aspects of the film were widely condemned by critics, along with the not-quite-coherent story and the greatest barrier of all, the slow pace. So when did audiences and critics alike have such a change of heart?

For one thing, Blade Runner‘s ascension to cult status was a slow process. There is a sense that audiences were ill-prepared for the film in 1982, coming as it did off the back of Harrison Ford’s Star Wars/Indiana Jones one-two punch of the previous years. Ford was keen for a role which offered more depth than those he was quickly becoming trapped in, but viewers were not to know what was in store, especially given the misguided advertising (the film was labelled an action-adventure; each of these terms is woefully inappropriate).

But over the following years, and beginning overseas where it was more favourably received upon release, people were growing aware that the more time you spent with the film, the more rewarding it became. Yes, the film is slow, but it is far from vacuous. Rather it is deeply contemplative, and the deliberate pacing combines with visual and thematic richness to create an experience which truly gets under your skin.

Foremost among the film’s heady considerations is what it means to be human. The woman – our femme fatale that Deckard encounters early on – is introduced to him as a replicant who believes she is human, and this calls into question all he thought he knew about the nature of humanity and the clear-cut line between man and machine. Though technically only a few years old, she has been designed with artificial memories going all the way back to childhood, a terrifying idea which recalls a segment of the recent Black Mirror Christmas special.

Blade Runner is rife with symbolism, chiefly the image of the eye. In this world where humans and replicants look exactly alike, seeing is no longer believing, and even our own memories cannot be trusted. Eyes both human and man-made are the focus of shots and dialogue throughout the film, and it’s no coincidence that the leader of the replicant splinter cell, Roy Batty (played by Rutger Hauer) pays a visit to the scientist who designed his. “If you could only see what I’ve seen with your eyes”, Batty tells the man, in a line which he echoes later during a famous soliloquy (perhaps the film’s most enduring and iconic scene).

Hauer gives the performance of a lifetime as Roy Batty, one of cinema’s most engaging and poetic villains. Scott cast the role without even having met him, so impressed was he by Hauer’s previous work, and Philip K. Dick was delighted by the choice, calling him “the perfect Batty – cold, Aryan, flawless”. Batty spends the film trying to find a way to expand his replicant model’s four-year lifespan (an intentionally built-in safety measure), coming as he is to the end of the cycle. It’s Batty’s actions that prompt us to question our notions of man and machine; while Deckard follows orders, carrying out his task with machine-like thoughtlessness, Batty wishes deeply to be in control of his own fate. He is cold and violent, but also fuelled by deeply human desires (“I want more life, father”, he tells the man who designed him). Batty is passionate, thoughtful and loyal to his friends – human qualities which Deckard lacks, and this subversion of man/machine roles is central to the film.

Clearly then, even in its original cut, Blade Runner was an ambitious meditation on humanity, with themes and imagery which I have only begun to touch upon. The presentation, however, left a lot to be desired. The most dramatic improvement came in 1992 with the release of the Director’s Cut. Though limited by time constraints, this retooling was done under Ridley Scott’s supervision – it did away with Ford’s voiceover and the studio-mandated ending (leaving the film on a much more fittingly ambiguous note) and overhauled the film’s editing, presenting a more coherent narrative. But Scott’s final say on the matter didn’t come until 2007’s aptly titled Final Cut. Released for the film’s 25th anniversary, this definitive version was similar to the Director’s Cut but featured digitally remastered visuals, among other small changes, and was presented alongside an enlightening 200-minute ‘Making Of’ documentary.

The Final Cut is unquestionably the definitive edition of the film, and it is this version that will be playing across cinemas nationwide for the next few weeks. The removal of the on-the-nose narration reveals the subtlety of the rest of the script; the characters are written with a degree of nuance unmatched in the genre, and much of the dialogue (Batty’s in particular) is breathtakingly lyrical. Blade Runner also looks better than ever before. Scott’s neon Tokyo-influenced L.A. is astounding in both its scope and intricacy, and the omnipresent police overwatch, as well as the searchlights which invade every last claustrophobic interior, suffuse the film with an oppressive atmosphere of inhumanity and paranoia. Vangelis’s electronic soundtrack perfects the film’s synthesis, a flawless blend of sci-fi and noir replete with mournful saxophone-centric love theme.

Reports have recently surfaced regarding the film’s planned sequel, though details of the project are few and far between. Scott is involved in a producing capacity, and has indicated that shooting will begin in 2015, based on an initial screenplay draft by Scott and Hampton Fancher, co-writer on the original film. Ford is also slated to return in a supporting role, and in terms of plot details Scott has offered only that the film will feature a female protagonist, and involves a search for Ford’s character.

Denis Villeneuve is attached as director, an interesting choice with a strong track record, but fans of the original remain apprehensive – though he has two stone cold classics to his name in Blade Runner and 1979’s Alien, Ridley Scott is notoriously inconsistent, especially in recent years (his most recent film, Exodus: Gods and Kings, was lampooned by critics). It remains to be seen how any sequel will be able to justify its own existence, being as it is that the original stood so well on its own and offered no clear avenues for potential follow-ups. Other involvements remain up in the air – will Vangelis return to score the sequel? For me, as for many fans, his music is so inexorably linked to Scott’s vision that it’s difficult to imagine the one working without the other.

However this project turns out, it won’t affect Blade Runner‘s mighty reputation. This visionary neo-noir masterfully blends a beautiful, awesomely immersive world and profound thematic content. It is essential viewing for film fans and sci-fi fans of all predilections, and has had a dramatic impact on all that followed, from Ghost in the Shell, the seminal cyberpunk anime, to informing the look of Gotham City in Chris Nolan’s The Dark Knight Trilogy. But through these decades of influence, Blade Runner remains a unique viewing experience, one which may never be equalled in the genre. You owe it to yourself to get to your nearest cinema, and watch this one up on the big screen.

Coronavirus vaccine to be produced in Oxford