“Kaiya and I both talked about doing a drag show in the hypothetical for a while, and then for Queerfest, I duct-taped my tits, and I had so much fun… they played Let It Go from Frozen, and I sat everyone down on the sofa in Plush and lip-synced to them, and then as we left Plush, I was like, ‘I need to do this in front of more people, and more people I don’t know.’”

So began Not Your Nice Girl, a duo with great ambitions: challenging an audience’s understanding of gender through performance art is no small feat. Jessy Parker Humphreys and Kaiya Stone, however, seem uniquely placed to rise to the challenge. I met Jessy to discuss their recent success with Binding (a play put on at the BT last term which they wrote and directed) and future plans, both for the devised show BEARDS in 0th week and beyond.

As we wait for our coffee, I ask what they thought of their first directorial experience. “Never again!” they say, laughing. “Well – maybe not never.” In spite of Jessy’s own reservations, their debut was indisputably well received: one review called it ‘a piece that reached out to the audience in every way, buzzing with a sense of change and exciting new voices that need to be heard.’ And while they prefer writing to directing, they describe it as a very positive experience overall. “It was really interesting putting it on – it was quite a personal play, and it was weird putting it into someone else’s mouth and having them play a part which is effectively you, but the feedback was absolutely incredible.”

Touch Therapy, another play Jessy wrote around the same time, is being taken to the Edinburgh Fringe Festival this summer under the direction of Amelia Brown; they admit that the pressure to redraft feels more intense without the freedom to change things over the course of the rehearsal process. With Binding, some scenes were totally devised in the weeks leading up to opening night, and they’re continuing work on it even now – it may be re-written as a one-person show for performance next year.

For the moment, however, BEARDS is the priority. The event page invites anyone and everyone to collaborate with the pair to create ‘a show which will leave you feeling liberated, excited and QUEER. AS. FUCK.’ In particular, they emphasise the importance of a gender performance rather than a gendered performance.  “Kaiya and I are very aware that drag has traditionally been cis men dressing up as women in a very specific idea of womanhood, and I guess that’s what I would consider as ‘gendered’ performance,” Jessy explains. “We didn’t want to go and just flip that on its head, like, oh, cis women should go and do ‘manhood’ – it’s about gender and playing with gender, but not having to be that kind of binary switch, not necessarily having to play into traditional ideas.”

Over the past month, they’ve sent out a number of emails listing eclectic inspirations and unusual prompts (“Can time be gendered?” “If you were going to create your own myth about the formation of gender, what would happen in it?”) “The aim of the show is to bring people into the performance stuff who might not necessarily have done it, so we’re very much trying to show that creative influences don’t have to be obvious, and I think that comes from me and Kaiya having very varied, very atypical influences ourselves.” Kaiya, who was President of St Hilda’s College Drama Society in her last year at Oxford and is now at drama school, also has a background in comedy and choral singing, as well as an interest in fashion and makeup; Jessy describes their own experience as being comprised of “various random bits and bobs.” The two hope that drawing attention to their disparate influences and experiences will encourage others to try their hand and have had some positive responses already, although Jessy jokes that “it sometimes feels a bit like emailing into the void.” Even so, they know they have an audience – mainly women and nonbinary people have signed up to receive the emails, which they feel is “a really interesting reflection of who wants to be doing this and who feels like they haven’t necessarily had the opportunity to do this before” – and describe not knowing what’s going to happen in the show until the workshop that morning as part of the fun.

What, then, do Not Your Nice Girl hope to accomplish with BEARDS? Jessy classes the performers as the priority. “I think it’s about giving people the opportunity to do stuff they don’t normally get to do.” And if there’s one message people should take away, “It would be that everyone should get on stage and come up with creative things about gender because it’s really fun and it’s really important and I think it’s a really nice way to explore gender stuff without it being a big deal.”

With BEARDS a week away, a scratch night at the Camden People’s Theatre the following day, and big plans for the Fringe this summer, the pair seem poised to provide an eye-opening experience for their actors and audiences alike. “Both Kaiya and I see Not Your Nice Girl as a very long-term project encompassing lots of different things, so hopefully that will continue to be a venture with which we can put out as much creative work as we want to and can do.” 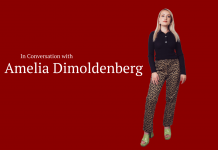