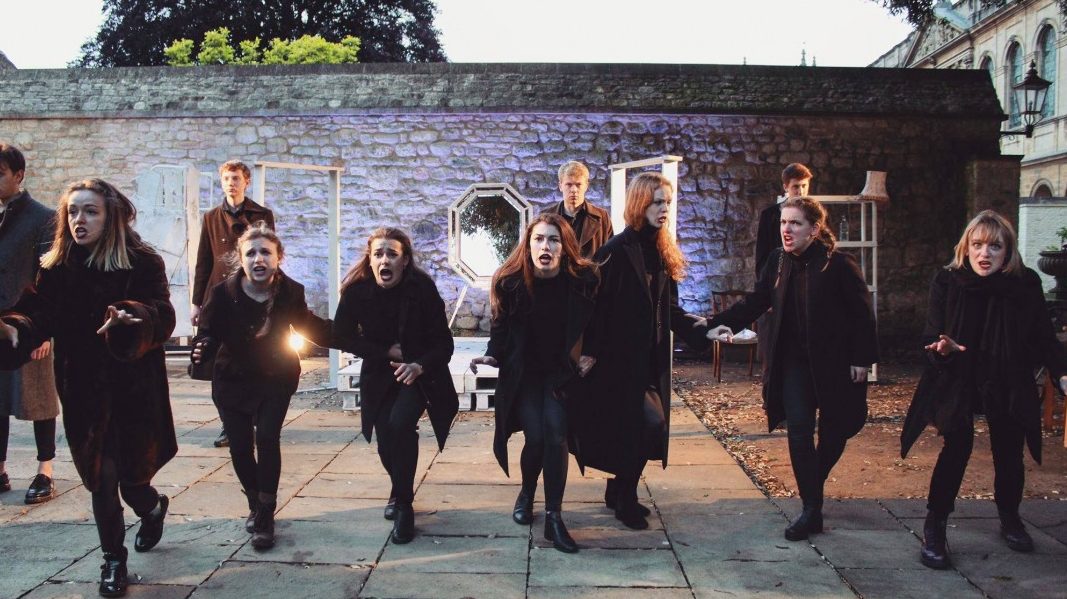 It’s always a risky business, al fresco theatre, and especially so in Oxford where the rain seems to find a way of sticking around even when the rest of Britain is sunny (and especially if for once you don’t need to be in the library). When I arrive at Queen’s gardens to see a preview of the Eglesfield Musical Society’s open air production of Sweeney Todd, the sky is threateningly grey, and it’s just on the edge of starting to pour down on me; the tension amongst the cast and crew is palpable. They’re well prepared for any eventuality, however, be it rain or shine, armed with an alternative indoor theatre venue and a plethora of long-range forecasts.

Sweeney Todd, the tale of the “demon barber of Fleet Street,” follows a murderous joint enterprise between barber Sweeney and his neighbour, Mrs Lovett, who have their fingers (and customers) in many pies. The scene I saw showed Eoghan McNelis giving hints of both the relaxed and maniacal side of Sweeney while Mrs Lovett was expressively portrayed by Lila Chrisp, with an infectious humour and lyrical cockney accent that had me grinning from the outset. In several productions of this show I’ve found Mrs Lovett to be the show-stealer, so watch this space!

I manage to grab a few moments with director Olivia Hugh-Jones between numbers, and she explains the challenges of staging an outdoors production and the limits it necessarily places on staging and sound, but from what I see and hear they seem to be on to a winner. Plus, it does come with its benefits – as the show goes on and the themes become darker, so will the sky in a beautiful, effort free lighting effect. Coupled with colourful washes on the walls of the quad and carefully placed spotlights (“The cheekbones!” enthuses the director), this should be very effective.

The Victorian setting of the original show has made way for a more contemporary and “less is more” staging which has certainly been done successfully before and seems to be well set up here, using modern monochrome costumes and pared back scenery. Olivia explains that “performances have to be honest and open – especially since the cast will be very much exposed outside.”

Considering that the first outdoor tech rehearsal was only the previous day, the cast and orchestra are sounding remarkably tight, with only a few missed lines or rushed sections, which will hopefully settle down by the time of the real thing.

First time musical director Laurence Jeffcoate capably led the orchestra (and this was despite several key members being absent, I was later informed!), but he lays the credit firmly at the feet of the “fantastic” players and cast. I hope the sound carries well for the actual performances; the orchestra is off to the side of the stage due to the shape of the quad and it can be a challenge to make sure the balance between voices and music is right, but from what I heard they’re coping well.

If the rest of the show is at the standard of the little I saw, this looks to be an exciting performance of what is a brilliant musical; all the cast and crew can do is hope for the rain to hold off. If you want to go then it’s best to hope for no rain too – tickets have already sold out but more will be available on the door if performances are outside! I’ve certainly got my fingers crossed.