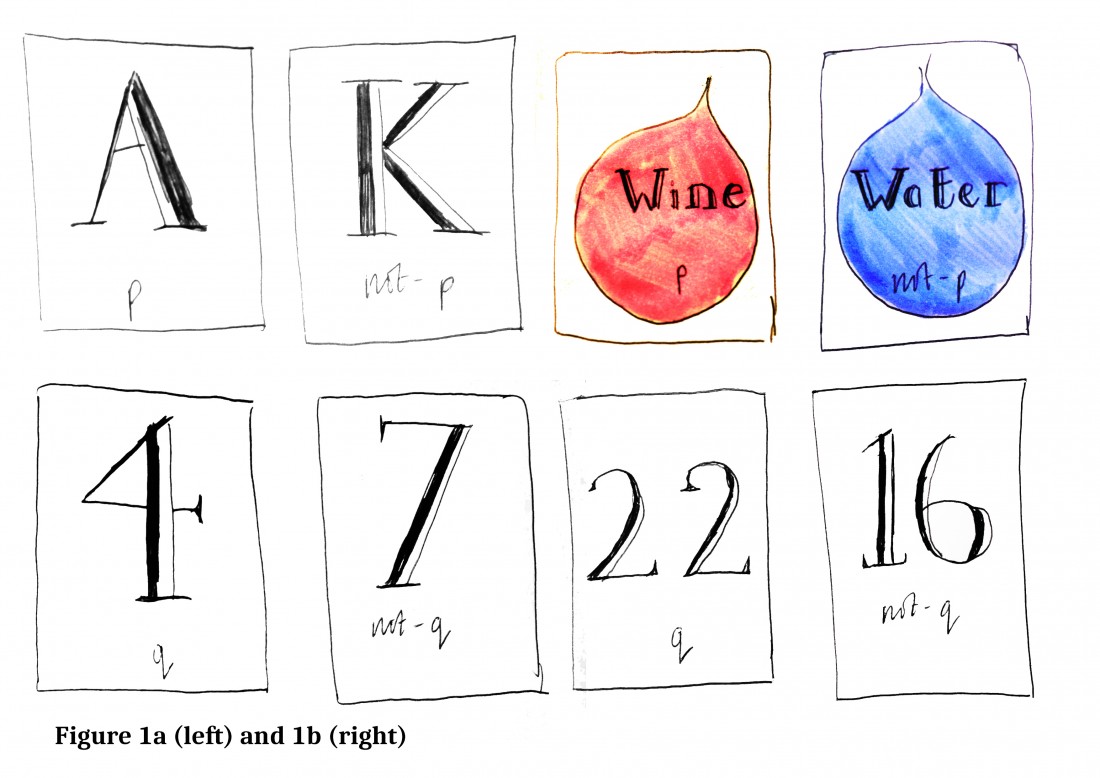 One of the cornerstones of the Western philosophical tradition is the idea that human beings are fundamentally rational, that we can question motives, reason about causation and think logically about abstract problems. Or at least we believe we can. However philosophical the issue of human rationality may seem, attempts have been made at resolving it with experimental science and the results have severely called the very notion into question.

In experimental psychology there are ways to test and measure whether humans react and respond rationally compared to what is dictated by formal logic, the philosopher’s golden standard. The most famous experimental paradigm used to test logical reasoning is Wason’s Card Selection Task. Four cards with a letter on one side and a number on the other are placed on the table in front of the participant, with A, K, 4, and 7 showing on the side facing upwards as illustrated in Figure 1a. The participant is asked to turn over the two cards which would allow definitive confirmation of the rule that if there is a vowel on one side, then there will be an even number on the other—which, in the language of logic, is “if p, then q”. Try this for yourself first before you read on.

According to formal logic, the correct choice would be to turn the cards showing A and 7. If A is true then there must be an even number on the other side, and if 7 is true, then there cannot be a vowel on the other side. However, most people rather turn cards A and 4, the ‘positive evidence’ of the rule. This seems to suggest that formal logic might not be a good model of optimal human reasoning. Nevertheless, human beings do reason. So if not by formal logic, then how?

Later research has suggested that we may instead employ probability or use an evolved mechanism for detecting social cheaters because when detecting cheaters in a real-world scenario people do generally demonstrate logical reasoning. This can be seen, for example, if the participants in the experiment are asked to detect ‘rule breakers’ in a card selection task such as the one shown in Figure 1b. Here the rule is that if a person is drinking wine, then they must be over 18. Which cards would you turn over now? Most people will now turn cards ‘p’ and ‘not-q’, the ‘correct’ choices according to logic.

The reader will sense that it is much more intuitive to turn cards ‘p’ and ‘not-q’ than it was with the vowels-and-even-numbers rule. Perhaps the first task is too abstract and too far removed from everyday reasoning. Although it may seem like we are following the rules of formal logic in the second task, it may be merely an example of optimal data selection.

Consider that if a pot falls in the kitchen then there will be a loud bang. To check this rule, it is hardly rational, or useful, to run to the kitchen every time we do not hear a loud bang as formal logic would dictate, but rather look for the positive evidence to draw probable conclusions. If there is a loud bang, it is probably—but not definitely—because a pot has fallen in the kitchen.

In the end it seems that logical reasoning may not be the best and most adaptive way for human beings to reason. Instead, we adapt our reasoning to prior knowledge and the particular problem posed. We adjust our actions to the situation and the problem at hand, attempt to extract the most useful information, and adjust our conclusions accordingly. People are not rational in the sense that they always use logical reasoning but rather in the sense that they choose the best strategy for the situation.