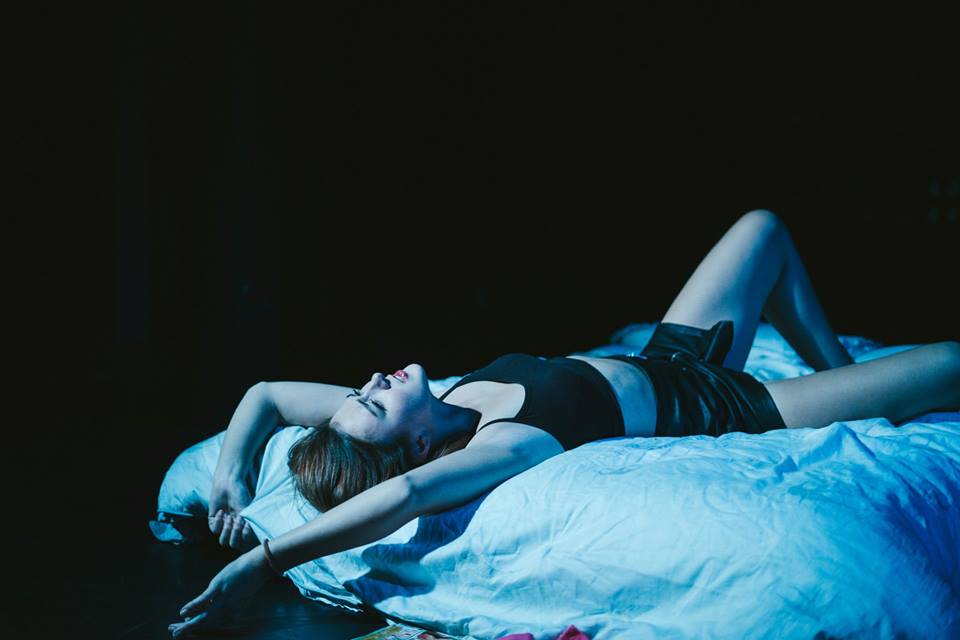 Despite the metatheatrical apology near the beginning of It Felt Empty where the protagonist declares she’s sorry we must see such disturbing sights, I’m certainly not sorry I did. Even though it completely warrants the trigger warning attached to it, this play is in equal measures distressing, compelling and raucously funny—it is definitely one to watch.

The play centres on Dijana, a 22 year-old Croatian woman negotiating the complex and devastating psychological effects of sex-trafficking. Its treatment of the commodification of women, which involves one being reduced to the worth of “two-and–a-half iPhones”, could not be more traumatically topical than it is this week. It lays bare how America’s election of Trump, whose wealth and status legitimises his rampant sexual abuse of women, reveals systematic apathy towards the dehumanisation of female flesh. Yet, however bleak this piece of student theatre is, in the capable hands of the director Lauren Jackson, it doubles as activism itself. All proceeds are going to the charity Clean Break, which seeks to help women who have been through the criminal justice system, or who are at risk.

Jackson’s occupation and cultivation of the Pilch studio is the most striking aspect of the production. Its stark, nondescript blackness encapsulates the play’s feeling of liminality and heightens the viewer’s awareness that the women depicted have fallen through cracks in society. The set’s plainness allows it to be amorphous, flitting between locations in a spiralling and distorting manner and to mimic the instability and confusion experienced by the tonally fractured protagonist. Despite the plethora of allusions to specific and recognisable settings, including Canary Wharf, Dalston, Shoreditch, and Brighton, the narrative seems to occur in a void. The whole piece seems to consciously tug at the pit in your stomach, the stifling, oppressive heat of the enclosed space providing a taste of structures of female imprisonment and oppression. This production plays on the desolate tradition of female confinement in domestic spheres, which has haunted the works of women writers such as Charlotte Brontë, Emma Donoghue, and Charlotte Perkins Gilman. The complex pain of this is revealed by the eclectic works of art strung from the ceiling; the sweep of images range from vitriolic, blotchy reds against white paper, displaced masks, and used plastic, to feminine, floral pictures, filled with vulnerability and pathos.

Jackson tries to make the play immersive: the audience is sprawled primarily across the floor, and encouraged to move freely amongst the actresses and props. Although emotionally difficult the audience interaction emphasises the claustrophobia and intimacy of the production and instills in the viewer a chilling sense of implication. This is exacerbated by the complete physical absence of men in the play, the perpetrators of Dijana’s torment always remaining invisible. There is a sense that the person to blame for these atrocities could be the person who serves you at the supermarket, or someone sitting in the audience with you.

The stamina and physicality of Natalie Lauren and Shannon Haye, who play Dijana and Gloria, is extremely potent. The depth of irony in Dijana’s lament that she’s not an Oxford University student, considering the diversity of options we have, anticipated my apprehensions about how the subject matter would translate in student theatre. A phoney refraction of Kirkwood’s nuanced treatment of sex-trafficking, by actors who were clearly out of touch with the issue, would have been hard to stomach. Fortunately, the actors evidently approached the text with a well of emotional intelligence. The feverish, child-like delusion, hope, and despair of Dijana were emotively articulated by the captivating lilt of Lauren’s accent.

Although the immobilised way sexuality and violence is shown is gut-wrenching, both actors avoid dipping into sentimentality: they maintain a subtlety and ambivalence which is far more profound. This is especially marked in how they deal with the audaciously dissonant humour of the play. Just as Gloria must signal to the traumatised Dijana when to laugh, the audience remains in a constant state of uncertainty. The way their performances lurch between funny and just too jarring is uncomfortable but thought-provoking. If I had one critique for the piece, it is that the unstable portrayal of time means the uncertain pacing may be draining for some viewers. Fundamentally, however, the actors manage to make their characters as textured as the troubling tale necessitates, in a way that holds your gaze.

Ultimately, as a massive admirer of Lucy Kirkwood’s work, the idea of a piece of her writing shifting into the world of student theatre was both tantalising and anxiety-inducing. After viewing it, I’m convinced that it was in the hands of people with the emotional capacity to explore such meaty issues in a frank and constructive way.