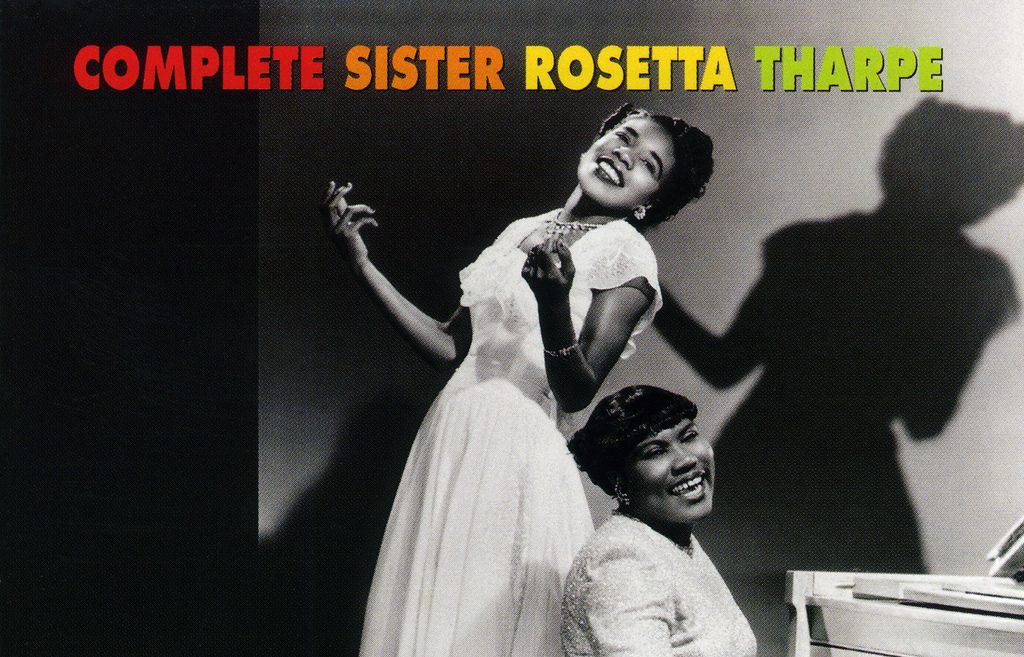 If someone were to ask if you’d ever heard of an artist named Sister Rosetta Tharpe, what would you say? Granted, if it was your mate with loads of vinyl who always scoffs and says, “What do you mean you don’t have a record player?”, you might try and feign some sort of vague knowledge, but if we’re being honest with each other, you haven’t heard of her. Most people haven’t.

At least not until 2011, when BBC Four aired an hour long documentary entitled ‘The Godmother of Rock & Roll.’ The “original soul sister” deserves your attention. Born in 1915, a decade before Chuck Berry, to two cotton pickers in Arkansas, Sister Rosetta Tharpe would go on to be one of the best and most exciting guitar players America had ever seen.

She attended the Church of God in Christ (CGIC), a domination known for its musical expression and its progressive view on gender roles within the Church. She first picked up a guitar at the age of six and spent the rest of her childhood touring the US with her mother before they moved to Chicago where she continued to perform.

By 1938, her first marriage to preacher Thomas Thorpe (from whom she adopted her stage name) having failed, she moved to New York to further her musical career, appearing at John Hammond’s ‘Spirituals to Swing’ concert at Carnegie Hall in the same year. Sister Rosetta was ground-breaking—not only was she black, not only was she a woman, but she also also dared to mix gospel and secular music, even when met with criticism and abuse.

Her critics, and also her fans, would often say of her that she could “play like a man” but one look at her performances tells you that she could play far better and in a far more modern way than anyone else, woman, man or otherwise, in the late 1930s and 40s. Gordon Stoker says of her guitar skills that, “she did incredible picking. That’s what attracted Elvis to her. He liked her singing, too. But he liked her picking first, because it was so different.”

This comment may appear flattering, but it is symptomatic of the way that Sister Rosetta is constantly discussed and remembered amongst music critics and historians: always in reference to the men who came after her, who were ‘more important’ than her, whom she influenced. She is constantly cited as a ‘pioneer’ of rock’n’roll or a major influence on artists like Elvis, Chuck Berry, Johnny Cash and Little Richard, but she was, in her own right, an astounding musician.

Her daring was even such that it would spell her demise. In the early 1950s, Sister Rosetta attempted to blend gospel with blues, but consequently became so unpopular with her conservative gospel fans that, by the end of the decade, she had been dropped by her record label, Decca. She was able to continue to perform right up until her death thanks to an invitation to tour the UK with trombonist Chris Barber in 1957 and her resulting European fan base, but her reputation in the US had been marred not only by criticism from gospel-lovers, but also with accusations of bisexuality.

She died of a stroke in 1973 and was buried in an unmarked grave. A posthumous revival has been sparked due to praise from Johnny Cash and Bob Dylan, but it is important that we do not remember her as an influence on the male artists that came after her. Rather, we should recognise her astounding musical talent in its own right, viewing her as testament to the continuing whitewashing and sexism of rock’n’roll.