Review: In the Republic of Happiness 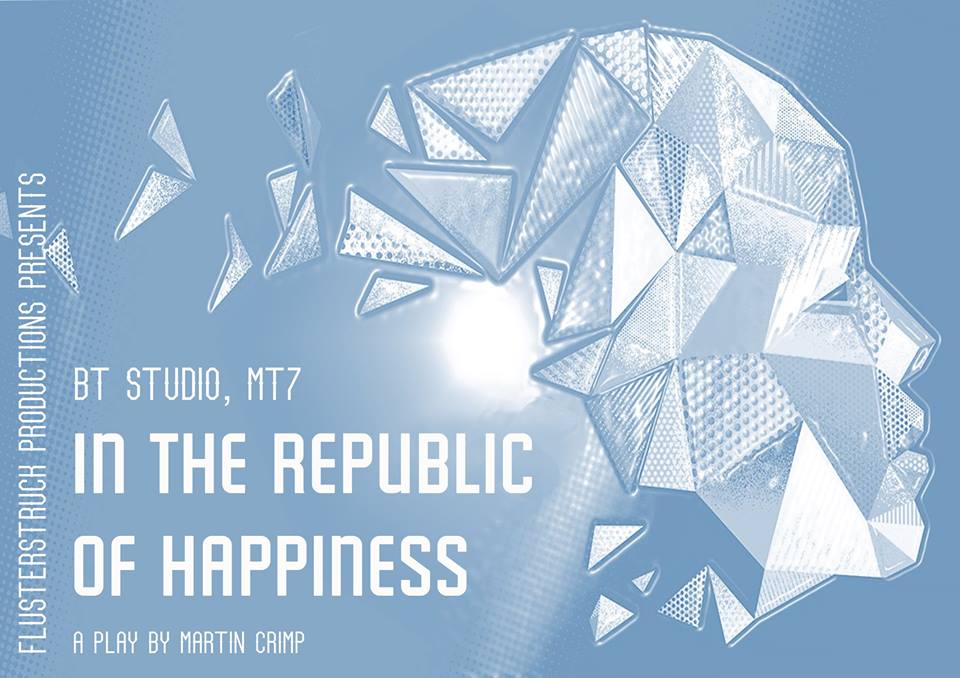 In my eyes, Martin Crimp’s experimental play In the Republic of Happiness is somewhat reminiscent of George Orwell’s 1984. Just as Orwell proclaimed that he wrote “because there is some lie that I want to expose, some fact to which I want to draw attention”, Crimp’s play delivers a shocking critique of the 21st century’s self-obsession, consumer culture, and delusional dreams. Performed for the first time in Oxford in the Burton Taylor studio, the student production does well to capture the spirit of such a complex and layered script. The incredibly talented actors competently navigate the stormy seas of traditional acting, physical theatre, dance, and singing.

As it starts the play seems reasonably straightforward. We see three generations of a working-class family, clearly uncomfortable in one another’s presence, suffering through a Christmas dinner. Awkward subjects are raised, such as alleged favouritism and internet pornography, and characters can scarcely move for the presence of incredibly obvious elephants in the room: family grandfather (Max Cadman) has dementia and teenage daughter Debbie (Alexa Mackie) is unexpectedly pregnant.

However, all awkward tension is shattered when Uncle Bob (played by the charismatic and talented Hasan al-Habib) enters uninvited, only to drop bombshell after bombshell on the characters’ already difficult lives. After his diatribe, the lights dim and the play’s centrepiece, the Five Essential Freedoms of the Individual, begins: plot and character are cast aside and cast member after cast member becomes a generic member of society, proclaiming how independent and free-thinking they are. However, it quickly becomes clear that they are not; in a sly piece of deconstructionalism, each cast member shouts defensively that “I write the script of my own life”, but both Crimp’s dialogue and the excellent choreography of director Una O’Sullivan make it clear from the outset that this is not the case; words and phrases are repeated and jumbled up, while O’Sullivan has the multi-talented Lucy McIlgorm act as the masterful puppeteer behind each character’s actions.

But it would be remiss of me to talk too much about Crimp’s writing, when the performance is really all about the director and the actors. Much like Crimp’s more famous work, Attempts on Her Life, In the Republic of Happiness is one of those plays which requires significant interpretation on the part of the director; the original script is sparse, lacking stage directions and unlike a Shakespeare play, the director cannot fall back on the safety net of prior adaptations for ideas, since the play has not been regularly performed in the past ten years.

In a very real sense, Una O’Sullivan had the chance to break new ground in her adaptation of the play, which is exactly what she has done; the choreography of the dance and physical theatre are excellent, and the play seems suitably fractured. The work’s chaos and discordance relies on the grindingly incongruous repetition of certain words and phrases, and O’Sullivan does well to really bring this out; the play’s middle section feels fittingly uncomfortable and nerve-racking due to her directorship.

Considering what was asked of the cast of eight, the acting is good. The conversation in the opening scenes is a little stilted and Debbie (Alexa Mackie) at times seems undecided as to whether her accent hails from Notting Hill or Aberdeen, although I am sure this is just down to first night jitters. As the scene progresses, actors seem to settle into their temporary characters. Amelia Coen is completely believable as the angry younger daughter Hazel with her cutting jibes, while Hasan Al-Habib’s masterful portrayal of the outwardly charismatic but sexually abusive Uncle Bob steals the first act in my eyes.

Each and every actor comes into their own during the second act; I can fully understand the somewhat jerky nature of the first act when I realise how much blood, sweat and tears must have gone into the carefully crafted choreography. Lucy McIlgorm here shines with her incredible singing, as well as her dancing and acting. Clearly chosen for the role of puppeteer for her on stage gravitas, she masterfully commands the audience’s attention.

Despite a slightly stilted beginning, this Oxford production competently handles a difficult play. Under director Una O’Sullivan’s leadership, the acting goes from strength to strength as the play progresses, and I would thoroughly recommend trying to get your hands on a ticket.