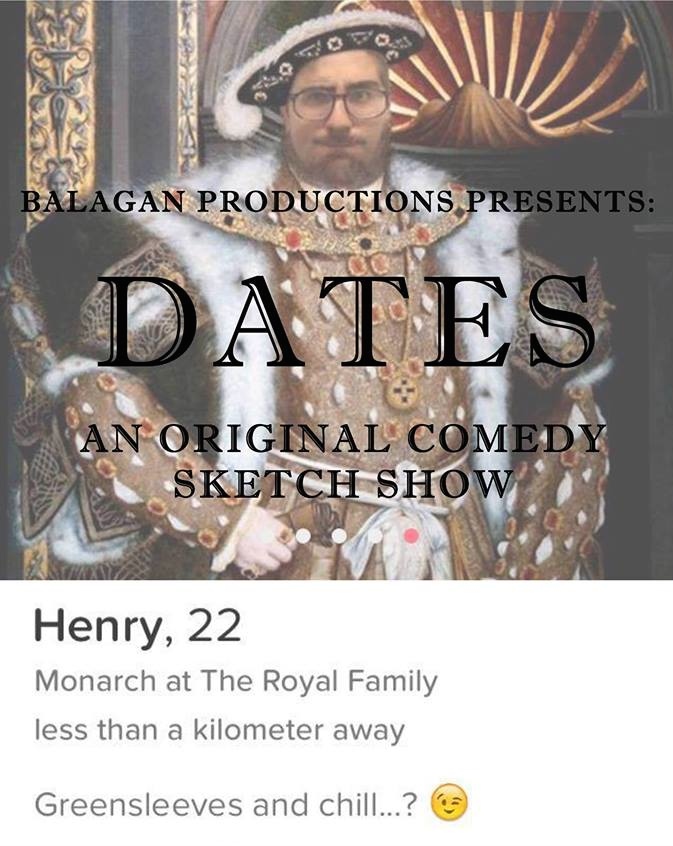 Every successful sketch show needs comedy glue. In many cases, this glue is provided by a fantastically talented cast of professional actors, or a particularly dynamic duo. Just think of The Armstrong and Miller Show or A Little Bit of Fry and Laurie, where the principal pair’s wit and confidence creates a sense of unity across a range of seemingly unconnected sketches. On the other hand, Rebecca Heitlinger’s new sketch show [email protected], written for an inexperienced student cast, uses a different kind of comic glue–a single theme. There is little interest in character development or overarching plot, instead, each sketch satirises modern dating in a hilarious, irony-laden way. Last night’s charmingly witty performance paid testament to how successful this novel approach can be.

Staged in the cosy Burton Taylor studio, the show’s first night had sold out impressively early, despite boasting the late start time of 9:30pm. The performance began well, if a little nervously, with a sketch about an amusingly mismatched 21st century couple. Rebecca Heitlinger, both actress and writer, was confident from the off, parodying the hipster craze for “quasi-vegetarianism”, although the sketch took a turn for the bizarre with some jokes about Jews and ethnic minorities, somewhat confusing the audience. However, this did prove that the show would not shy from at times controversial material, with later jokes involving Nazism, Nuremberg and Donald Trump, although I would not be surprised to see jokes about the Paris and Nice tragedies excised from future performances after drawing audience gasps. As with any show, a few of the later sketches did not quite catch on with the audience; some seemed rather laboured, while others could have done with being a little more laugh-out-loud funny, rather than merely ironic. One potentially brilliant sketch, focusing on a man who goes on a date after waking up from a year long coma, was somewhat ruined by a few niche jokes about Taylor Swift’s cultural image. Although I may just be desperately behind on celebrity gossip, I was left racking my brains in search of any Swift related news I might have stored up, but to no avail. It was a shame that such a brilliant idea went to comparative waste.

Despite these hiccups, the show had two veritable masterpieces. The first was the well-publicised ‘Tudor Tinder’, a polished sketch in which a noblewoman browses Tinder portraits (literally) for Earls and Dukes in search of a potential suitor. The piece was full of wit and satire, such as when Lady Anne (Sophie Stiewe) exclaimed, “Finally I can stop being the property of my father—now I can be the property of another man!” In a similar vein, the sketch is at times socially incisive, drawing out shocking similarities between the 21st century and the Tudor era in terms of sexism, and mocking the shallow nature of Tinder itself. Alex Matraxia excels as the suave and sophisticated matchmaker Count Tinder, and the scriptwriting is Heitlinger at her best: concise, witty, and meaningful.

The sketch which unexpectedly drew the most laughs from the audience featured a translingual date performed entirely in German. Thankfully, hilarious English subtitles were projected onto the wall behind the actors. The subtle miscommunications and Heitlinger’s character’s tendency to slip into a clichéd essay style had the audience howling with laughter to such an extent that the German conversation was soon drowned out. Instead, the audience stared at the wall in anticipation of the next mistranslation, and the entire sketch was perfectly acted by the enthusiastic Heitlinger and the bemused Stiewe. Overall, the first night of Dates was a great success. As with any piece of student comedy, a few sketches missed their mark and on occasion the acting was a little rough around the edges, but both the cast and the script produced moments of laugh-out-loud comedy gold while maintaining a meaningful commentary on the perils and pitfalls of 21st century dating.