CherwellIndependent since 1920.
Comment The campaign for curriculum decolonisation in SOAS 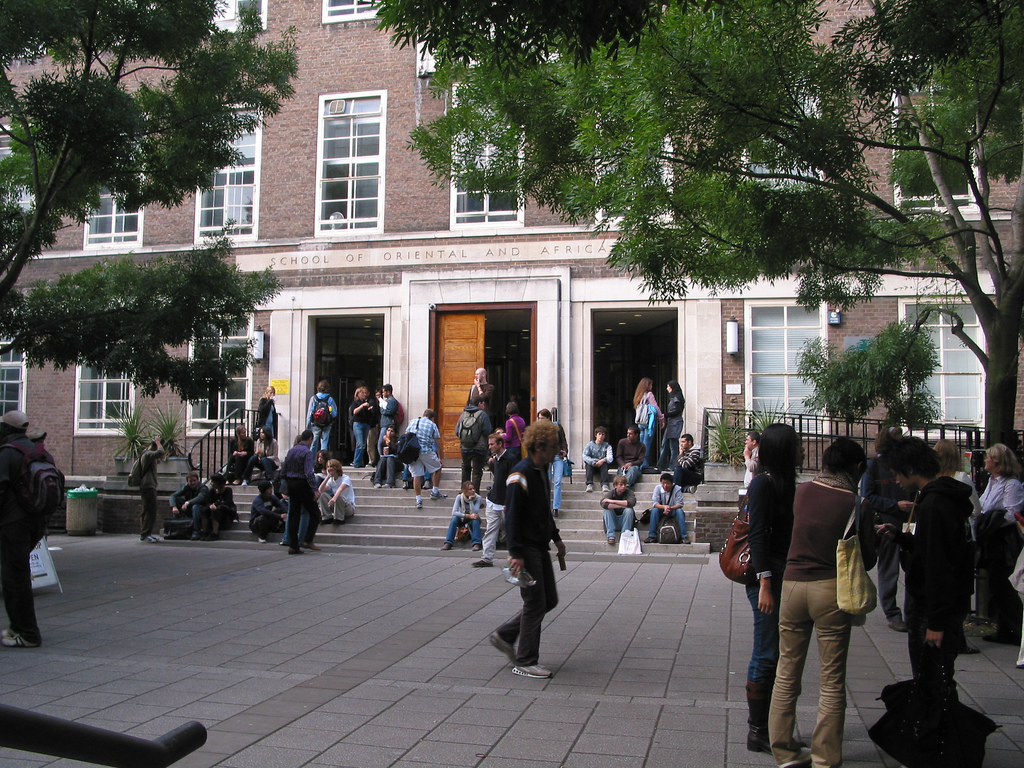 “You have a colonial institution that, you know, has, arguably, coloniality still embedded within this institution. And then it’s the 100th year [since SOAS’ founding]. You have students saying, ‘Well look, we need to critically assess the history and not let it be some celebrations.’” Mohamed Zain-Dada (Co-President of Activities and Events, SOAS Student Union, 2015/16), in a video published in December 2016.

When I first met Sarah in real life, whose name has been changed to preserve her anonymity, it was at a café close to the Vernon Square campus of SOAS, where she offered to take me on a brief tour over the course of the day as I visited the campus. Whilst the physical visit never materialised, the conversation that played out allowed me to gain some unique insight into the ongoing campaign for curriculum decolonisation. Sarah was not a part of the official student movement, but felt strongly about defending its reputation against what they perceived to be “unrepresentative attacks made by media outlets”. Her close ties to the participants in an ongoing social and academic movement that has attracted supporters and critics from across the globe give her valuable insight into the nature of its demands.

Students at the London School of Oriental and Asian Studies (SOAS) have sought to lobby for an active ‘decolonisation’ of their institution. ‘Curriculum decolonisation’, applied within an academic or intellectual context, has been defined by a SOAS scholar as challenging the “huge debt and a body of knowledge which has reinforced the assumptions, experiences and limitations of past generations of scholarship” in the context of university education; by a professor working in Rhodes University as “[…] introducing well theorised scholarship emerging from, and underpinning by, the African local experience.”. They have attracted criticism from academics and university administrators including Sir Roger Scruton and Sir Anthony Sheldon, and been rejected as “ridiculous” by the head of the SOAS Religion and Philosophies department.

Sarah said it was about “calling out the Whiteness of the epistemic lenses of British universities”, and that “the system needed some shaking”. Decolonising the curriculum – as a concept – appears to be a contested and innately political idea, for which the ability to define and control its purpose and essence is instrumental in locating its relevance in the ongoing movement under the SOAS Student Union. The Union has aggressively lashed out at media coverage it describes as a “gross misrepresentation,” in a statement from January 9 that called for examining the representation of minority thinkers, increasing the number of BME faculty and cutting fees for students who had been “affected by class, racial and gender inequalities.”

The movement has published a list of its objectives on its official webpage, found here, as follows:

In particular, students have focused on campaigning for significant expansion in content within the BA World Philosophies course. Hawthorne affirms the views of the students, by noting that, “BA World Philosophies at SOAS is a unique programme that has been developed to promote philosophical dialogue between ‘East’ and ‘West’”. An initial examination of the course structure appears to show a wide range of existing modules available to students incorporating non-Western philosophy – the Year 1 outline mandates that students study two out of five options in ‘Traditions of Philosophy’ (featuring ‘Buddhism’, ‘Hinduism’, ‘Judaism’, ‘Islam’, and ‘Religions of East and Central Asia’).

At the suggestion that such options were adequate, Sarah laughed with a conspicuous tint of irony. According to her, the problematic features of the Status Quo pertained more to the implicit tendencies of course outlines and lectures to favour discussing Western philosophers as the basis of exploring the more general categories of philosophical study – e.g. the ‘Comparative Ethics’ and ‘Philosophies of Language’ components of Year 2.

Whilst the SOAS curriculum appeared to be diverse and inclusive, the practical divergences in teaching methodologies across courses meant from her perspective that students often struggled to comprehend the works of ‘non-conventional’ philosophers rarely taught and with publications scarce and few in the library. The SOAS union reiterated this perspective in its January 9 statement, emphasizing that the goal was for thinkers across sociocultural spectrum “to be studied in their appropriate contexts and for our curricula to encompass perspectives which reflect the diversity of the world we live in.”

More generally, students have also called for the prioritisation of marginalised philosophies in the Global South, and the situating of white philosophers from the Enlightenment Era within a ‘critical standpoint’ that highlights the colonial backgrounds of their works. Leaders of the movement cite the underrepresentation of non-European thinkers and the contributions of Oriental and African philosophies within European intellectual history as the primary justification for systemic reforms.  Commentators have suggested that the works of Immanuel Kant may perhaps be taught with a greater emphasis upon its underlying connections to conceptions and visions of race reflective upon Kant’s times and within Kant’s works. It was exactly this kind of proposal that raised the ire of some of the proposal’s critics, however.

““If they think there is a colonial context from which Kant’s Critique of Pure Reason arose, I would like to hear it,” Sutton said in his comments to the Telegraph.

Alternatively, the philosophical contributions of Enlightenment philosophers may also be recast in light of their involvement with colonialism – in both the actual (as per endorsing or providing the ideological basis for it) and ideological senses. Dr. Meera Sabaratnam adds that, “If we think that there is some kind of a relationship between position and perspective on an issue […] we need to diversify the sources we engage in our scholarship.”

The movement for intellectual decolonisation appears to be located within a wider wave of anti-colonial resistance embedded within the SOAS student consciousness. In the video released by the Student Union, Zain-Dada remarks that, “[…] you have a very particular type of student politics aimed towards a very particular type of students […] but a lot of the direct action and protests seem to be done by the white students.” It is hoped that with a greater range of intellectual ideals and ideas incorporated into the regular academic dialogue, SOAS could become a more socially inclusive and cohesive institution in which philosophical concepts from all around the world are given their fear hearing – independent of their geographical origins.

There is not, however, universal consensus in SOAS that the union’s demands as formulated are worth pursuing. Harper is a friend of Sarah’s that I came across in the very same café. Harper, unlike Sarah, finds the ongoing campaign “redundant” and “couched in unnecessarily politicised terms”. Whilst the underrepresentation of non-Western philosophers is an empirically verifiable stance, Harper noted, it is unclear to them why the deprioritisation of individuals who “simply have added less to academic philosophy” ought to be stigmatised and rejected. Harper further added that they found the politicisation of the curriculum by the Student Left a “bizarre” and “redundant” move.

The movement so far appears to have generated moderate traction amongst the teaching staff, with senior figures such as Dr. Deborah Johnston (Pro-Director (Learning and Teaching)) affirming the importance of the protests as promoting “informed and critical debate and discussion about the curriculum we teach”. Harper has expressed that whilst they were ambivalent as to the ultimate objectives of the ongoing campaign, they were “glad” that the movement has “opened up a new space for productive dialogue and discourse about an often neglected but important component of the SOAS identity”. The more curious observation, as noted by Harper, is that it appears that the movement has yet to pick up substantial traction within the student populace.

The movement itself has been subject to polarised and mixed reactions, with criticisms that it has participated in the “rekindling of racial politics” and “keeping with a poisonous new identity politics grabbing hold of campus radicals and the left more broadly”. Alternatively, more positive reception has been found in those who praised the movement for highlighting much-needed pedagogical and academic inadequacies in an institution that is traditionally renowned for its expertise in engaging with African and Oriental studies. Some SOAS faculty have celebrated the movement’s capacity to spark dialogue that transcends limited cultural perspectives. Prof. Sian Hawthorne (one of the two Convenors of the BA World Philosophies course) responded to the public backlash by observing that, “[…] decolonisation is fundamentally about the practice of dialogue; it is […a…] working towards what Hans-Georg Gadamer called ‘the fusion of horizons’ by which understanding across boundaries becomes possible.”

Curriculum decolonisation is a multi-faceted, complex, and contentious issue that has provoked vigorous reactions (both positive and negative) from both sides of the de-colonisation debate. Even as sympathetic articles cropped up in national newspapers, contemporaneous editorial coverage advanced the characterization of student activists as immature, coddled and unready for the adult world.

Whilst complete removal of Western philosophers from the SOAS curriculum appears to be neither the expressed wishes of the movement nor a realistic outcome, the ongoing discussion at SOAS may prove to be a pivotal watershed moment for future critiques of the intersection between higher education and social justice. Whether or not these activists merit the label “Special Snowflakes”, or are the precursors to a progressive reform in the curriculum of SOAS – remains to be seen.

*Names have been anonymised for the sake of privacy and confidentiality.