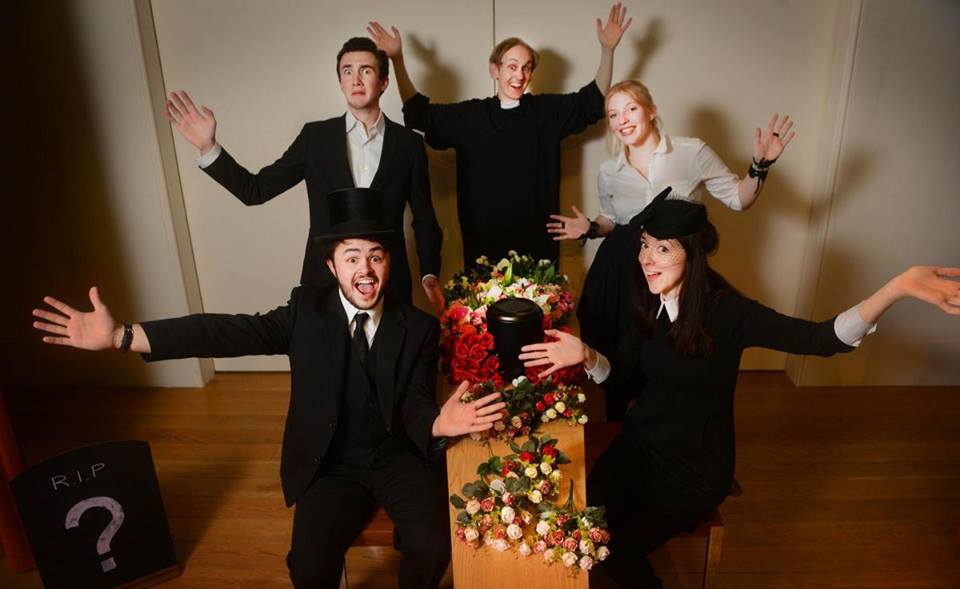 Acting is a morbid business. Never mind the on-stage gore and tragedy, dramatic lingo is chock-a-block with references to kicking the bucket: failed jokes “fall dead”, actors “corpse”, and comedians deliver their lines “deadpan”. In their new production, titled Dead Funny: The Improvised Funeral, the Oxford Imps took this macabre tradition to its hilarious limit with their own blend of improvised comedy.

The Imps clearly had fun setting up the Facebook page. The evening’s description promised to “urn” my laughter and make me “die laughing” as they “put the fun into funeral”, with “more foot-in-mouth moments than a cannibal’s barbecue”. Very clever wordplay and all that, but could the director not have left me just one joke for this review?

Sadly, they could not put the pun into punctuality. The show began a half-hour late and, although the show’s premise does hinge around the vicar’s delayed entrance, one feels that a laugh every thirty minutes does not successful improv make.

Thankfully the laugh-to-minute ratio dramatically sped up as it quickly became clear that the Imps are a wildly talented and charismatic bunch of performers with bright futures in the acting profession. Dom O’Keefe made up for causing the delay with a brilliant performance as a hilariously sarcastic vicar. While other performers were hit-and-miss (as is the nature of improvisational comedy) O’Keefe was somehow consistently on form.

The show’s format was strikingly original: a series of reminiscences about the deceased (all inspired by the wackiest of audience suggestions), allowing the performance to move beyond the physical location of the funeral parlour and into…well just about anywhere, as the Imps demonstrated. On the first night, these sketches wildly varied from bongo playing, and semi-crustacean pirates to jokes about match fixing in cricket, all through the quick wit and wordplay of the cast.

The performance benefited from the cast’s incredible musicality in the form of “hymns”. Although the poem round did not quite come together, laugh-out-loud hymns were improvised on the spot, while Joe Zacaroli impressed on the keyboard. The cast had clearly spent plenty of time honing their improvisational harmony as a group, and there were few awkward interactions between actors. While the sketches were amusing, some were a little too absurd, at least on the first night, although Giles Gear lent an edge of comic maturity and gravitas to the proceedings.

Improv often falls terribly, terribly flat. Actors are left flailing and hamming up their acts, all while the audience looks on in pained silence. Thankfully, nothing could have been further from the case last night. Despite their (hopefully) one-off lack of punctuality, the night was a great success: genuinely funny, talented improvisers came together around a thoroughly amusing theme to astound the audience.