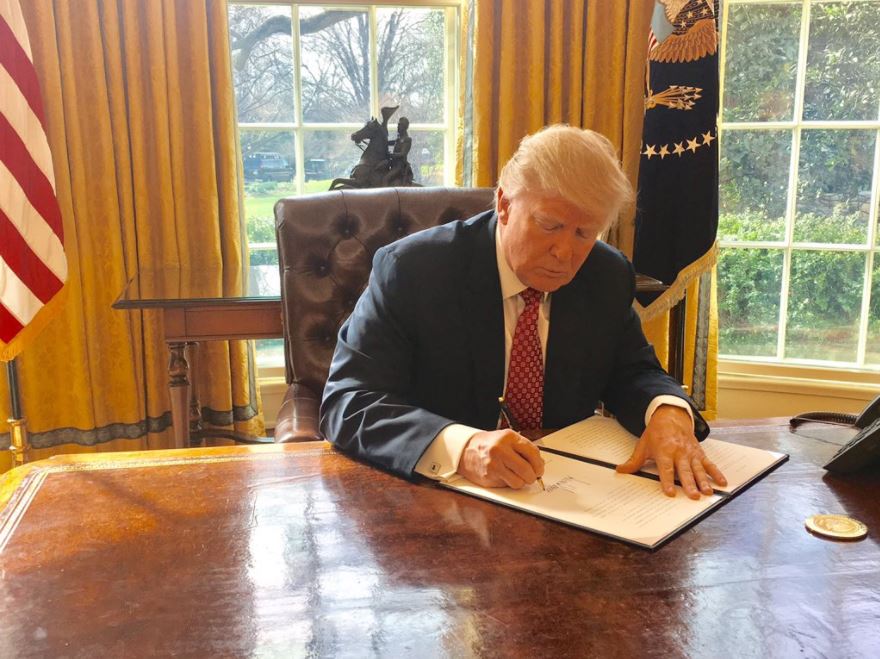 Speaking as a supposed linguist, there was something perversely fascinating about Trump’s language on the campaign trail: it was short, it was simple, and it was proactive. Yet it was also terrifying, coupled as it was with a divisive rhetoric of Islamophobia and nationalism. Sentences like, “We are going to build a wall and make Mexico pay for it!”, filled with the suspiciously self-confi dent bravado of an underhand used-car salesman, gave Trump his populist outsider appearance and appealed to his fanbase, but made him look like an angry wannabe-fascist to his rivals.

Simultaneously, pre-election Trump had a remarkable unpredictability, and an ability to both provoke and be provoked. From China to Kristen Stewart, from exes to contractors, nobody was immune from his judgement or wrath—a trait which Hilary exploited on her campaign trail when she argued that we ought not to entrust America’s nuclear arsenal to a man who could be enraged by tweets. 100 days into the Trump presidency, how much of his ambitious plan for America has he achieved? What has changed?

Trump made his mark early in his presidency with the “Muslim ban,” or rather a ban on people from countries Trump doesn’t like. Touted as a key policy—with Trump advocating immigration freezes and a “Muslim registry”—it was promptly shut down in a rather timely reminder that the executive branch is thankfully not absolute.

The other pillar of Trump’s plan—the Mexican border wall, to empty America of so-called “bad hombres”—has thus far fallen quite flat; from a “big, shiny wall” to a fence, to a plan which America will pay for now but Mexico will definitely be paying for in the future. (About as definitely as the turkeys will be paying for their own gravy). Obamacare, that evil front for FEMA death squads, gay frogs, forced abortion, and the second rapture, remains undead—though Medicaid is dying an agonising death. Nothing seems to actually be getting done, and the frustration in the air must be tangible.

Trump promised quantifiable results, that he would bring back jobs and penalise China, yet there doesn’t seem to be evidence of Trump following up on this pledge. Though employment has increased, it will take Trump-time to fairly be called a ‘jobs president’. So Trump has tried the foreign policy route, leaving us all feeling somewhat disconcerted.

He has defied Putin by attacking Assad and moved carriers into the Pacific, just off the Korean peninsula. Trump is prodding sleeping bears for the sake of showing off his power on the world stage. Fortunately this has not ended in complete disaster, for now. Nonetheless, Trump is showing a reckless and unpredictable side. Trump got involved in Syria and Afghanistan for emotional reasons, not after a lengthy consideration of the facts or the consequences.

This inability to control his outrage and anger—in the form of a tweet or a bomb—remains the single most terrifying aspect of a Trump presidency as a Brit. Gendered bathroom bills are a terrible thing, but legislation governing who gets to use which toilet will not cause a nuclear apocalypse.

That being said, the America beyond Trump’s head has never been so divided over issues such as these. Never before has one side of the culture war been so embodied by a president. America has seen cities full of protests and workplaces emptied by strikes since 20 January.

As for the world inside the White House, that too appears to be in disarray. Trump has been characterised as a loner, stressed, and hunched in front of CNN. He has suffered from leaks and gaff es oozing from all areas of his administration. His own staff have popularised “alternative facts” and “fake news.” According to Press Secretary Sean Spicer, Zyklon B wasn’t a chemical weapon and so Assad is worse than Hitler.

There have been far more serious leaks though, suggesting Trump will sign any executive order handed to him, and that Steve Bannon has been taking advantage of this fact. Melania, meanwhile, is costing the taxpayer millions as she (perhaps wisely) sits out the administration in New York. All the while, poll ratings are slipping to lows of under 40 per cent and Trump is so hated that even Ivanka’s fashion lines have become untouchable.

One thing that certainly hasn’t changed is Trump himself. His policy of ‘tweet now, think later’ shows no sign of abating. Who can forget his suggestion that Obama had wiretapped his New York apartment, and then his attempts to suggest that GCHQ had done the same. There was the embarrassing moment Trump refused to shake Angela Merkel’s hand, revealing him as an uneasy diplomat, and the article where he openly admitted that being president was “harder than expected.” Trump is finding out on all fronts that the presidency isn’t a business where he can shout at his underlings until the problem is solved. He’s finally realising that the presidency does not endow him with the same powers of reality TV to simply solve everything with a few careful edits. No wonder he spends so many weekends playing Golf at Mar-a-Lago. With so many people portraying your administration as incompetent, leak-prone or run by Steve Bannon, I’d be tempted to fly there and never come back.

So do I fear him? Or do I pity him? He does have control over a nuclear arsenal. He may be only 100 days into a four year term, but I feel he is almost more worthy of our ridicule for his 100 days of floundering.