You’re making your way down the track, 150cc, a few seconds away from the coveted finish line and the glory of first place. You’ve passed all the players, and the end is in sight. But, alas, you hear the brief wind of its release before the irritating alarm as it arrives, and in a moment, the attacker strikes, a cascade of noobs charge past and you’re robbed of your deserved prize.

It’s been the bane of gamers for over two decades, and the source of anguish, strife, as well as the break-up of friendships and loyalties. Naturally, this item has garnered many names over the years, but perhaps the most appropriate personification is the digital equivalent of Liam Neeson. It doesn’t know who you are, but what it does have is a particular set of skills. It will look for you, it will find you, and – if the unfortunate player in first place is traveling over the unforgiving abyss of such tracks as Mushroom Gorge or the infamous Rainbow Road at the point of contact – it will kill you. If any players happen to be in the same vicinity, they too will receive damage and delay as other players storm through.

This demon, of course, is the blue shell. Its presence in the Mario Kart world has caused so much ire, in fact, that Nintendo considered its removal in Mario Kart 8. In a 2017 interview with Eurogamer, current producer Kosuke Yabuki emphasised the importance he places on the “human element of the play experience”, viewing the blue shell as a necessary leveller to establish a democratic environment on the race track, no matter how high the gamer’s skill level. When questioned about its potential removal, Yabuki admitted that, while developers have considered such a change, he believes that its absence would leave a gaping hole, and notes that “something would be missing” from high-quality gameplay without its influence.

A similar viewpoint was held by Hideki Konno, producer of Mario Kart DS and Mario Kart Wii in a 2011 interview with Kotaku. He expressed this need for subjectivity and chance even more eloquently, stating his desire “to create a race where, up to the finish line, you didn’t know. We wanted to create a race where everyone was in it until the end”. The exclusion of such an item thereby takes away any enjoyment and tension; if a player is constantly in first place, then there’s no potential for chaos and misrule. Konno also observed that “Mario Kart without items is not Mario Kart”. The blue shell, as well as other items such as its red and green equivalents, provide a more balanced and varied experience for every player involved. On a more philosophical level, the indignation and resentment caused by its presence mirrors the everyday frustrations of reality. A simplistic, danger-free Mario Kart simply wouldn’t draw the same anguished human emotion, and would be all the worse for it.

Unsurprisingly, the blue shell’s inclusion has drawn criticism from many veteran gamers. Nintendo has responded to their indignation in the past with possible, albeit difficult solutions to evade the blue menace. In Mario Kart: Double-Dash!! and Mario Kart DS, for example, the player can dodge the blue shell with the use of a deft mini-turbo. In Mario Kart Wii, evasion techniques were primarily created through the use of an expertly-timed mushroom, or, in rare cases, a particularly well-placed banana. Even though escape is difficult, developers nonetheless allowed high-level participants to gain an advantage over less experienced players.

An intriguing dynamic with the blue shell came into play, however, in Mario Kart 8. While the brutal, ground-travelling shell movement was re-introduced from the original Mario Kart 64 – meaning it can take down any unfortunate player blocking its path on the way to its primary target – developers also introduced the Super Horn, an item that, should a player be lucky enough to carry it into first-place, will shatter the blue shell entirely upon its feeble attempts of destruction. Contrary to the previous, more family-friendly dynamics set out in earlier entries, the inclusion of the Super Horn appears to symbolise a radical and more hardcore change in Nintendo’s outlook, and one that will no doubt cause indignation among inferior competitors.

Yet, like the mushrooms and skilled mini-turbos before them, the chances of gaining the Super Horn in a low place and carrying it forward into first remain unlikely, and the integral balancing provided by the shell still prevails. It’s a (somewhat) silent guardian, a watchful protector, the dark (blue) shell. 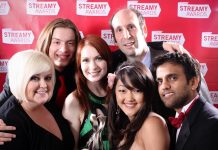