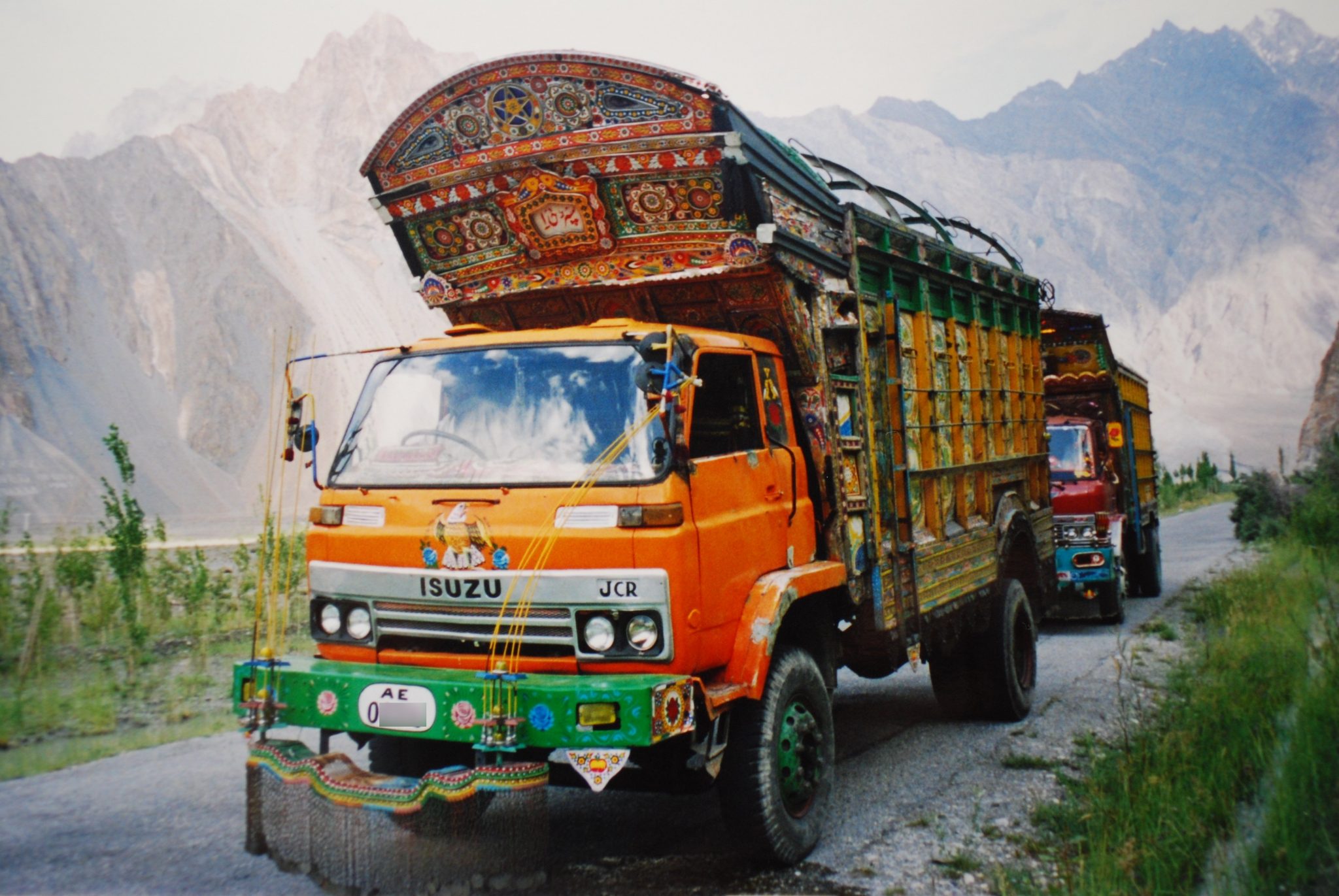 Set amongst the luscious Sarban hills of Northern Pakistan, Abbottabad attracts virtually no foreign travellers. Ever since 2011, when Osama Bin Laden was shot and killed here, the town’s name has become synonymous with terrorism.

However, just a few minutes from Bin Laden’s old abode lies an unexpected dusty courtyard, teeming with artisans. Sitting cross-legged on a stool in its center, a moustachioed miniature painter applies the ﬁnal touches to his painting of Pakistani cricketer and politician, Imran Khan. Beside him lies an engine fastened onto a colossal wooden skeleton, like some Mad Max monstrosity. To the left, a scruffy carpenter chips away at a sheet of scented deodar wood, humming along to a scratchy radio pop song. This is the hotbed of a new art form sweeping Pakistan: the Abbottabad Truck Depot.

It is common for trucks across South Asia to be decorated in elaborate ways – but in Pakistan, the art has undergone a true renaissance. Almost every truck in the country is embellished with a dazzling array of paintings, calligraphy, stickers, and delicately carved wooden panels. As Richard Covington writes: “All across Pakistan, this rolling folk art has turned village lanes, city streets and long-distance highways into a national gallery without walls, a free-form, kaleidoscopic exhibition in perpetual motion”.

Artisans have been decorating tonga carts for aristocracy since the height of the British Raj, yet truck art as it exists today began during the violence following the British departure from India.

After the partition of a Muslim majority Pakistan from a Hindu majority India, over ten million people were displaced, and three million more brutally killed. It was against this bloody backdrop that Haji Hussain – a court painter from Gujarat – ﬂed to Pakistan to start his life over as a refugee. Given the lack of work for someone of his disposition, Haji was forced into the trucking business in Karachi – where he began decorating vehicles for a small fee. Business grew rapidly and this emerging art form begun a rejuvenation.

Today, Karachi remains the epicentre of the industry, but an estimated 50,000 independent artisans populate three speciﬁ cally devoted districts. Many former court artists followed in Haji’s wake to innovate the trucking industry, after courtly and folk traditions fell prey to modernisation in the early years of the 20th century and truck decoration offered a form of salvation.

As a result, truck design is often regional and varies drastically from state to state. Whereas the red trucks from Sindh sport ﬂoral patterns of camel-bone inlay, trucks from Peshawar and the North-West Frontier are known for their intricately carved wooden panelling and calligraphy. Hence truckers can usually identify where another is from, simply from the design of his vehicle.

Despite this regional variation, the designing process is more or less the same across the country. Given the lack of safety restrictions in Pakistan, artisans have free range in what the truck should look like.

Having consulted a patron about which design their vehicle will follow, an imported truck is stripped down to its machinery, and craftsmen set loose in building, sticking and tinkering with the exterior. Finally, images of home and poems about travel, spiritual longing, and unrequited love are painted around the frame of the vehicle.

Owners spend fortunes on decoration. As Richard Covington revealed in a recent essay on the phenomena “a decent paint job costs $500 to $1,000 – perhaps more… Body decoration and repair can easily run an extra $2,000. All told, a basic painting and body job adds up to a minimum of $2,500, equivalent to two years of the average truck driver’s salary”.

By the time the whole process is completed, costs can run as high as $13,000: a colossal amount in a country such as Pakistan. Indeed whilst talking to the truck drivers in Abbottabad, one revealed that on average he would spend 80% of his income on decorating his ride and only 20% on his family.

“Truckers don’t even spend so much money on their own houses,” marvelled Durriya Kazi, head of the Department of Visual Studies at the University of Karachi. “We [Pakistanis] have an irresistible tendency to decorate everything  from lowly tape cassette players to brides to trucks. It’s all part of our need to intensify experience.” However, such is the absurdity of the industry that the expense is almost always worth it. The more lavish a truck’s decoration, the more jobs it is likely to run and an undecorated truck is likely to receive little to no business.

More recently, truck art has been at the centre of many Pakistani diplomatic efforts. In September 2013, truck art was featured prominently in the Hindu Durga Puja festival in neighbouring India as a gesture of peace. This year also saw Canadian Prime Minister, Justin Trudeau, become the ﬁrst western leader to be portrayed in truck art.

An article from Outlook Pakistan proudly writes: “There is no doubt that Pakistanis have a special place in their heart towards the Canadian Prime Minister Justin Trudeau who is a lively person with a friendly attitude towards cultural diversity.

“He has always been doing something that makes Pakistanis feel him as their very own… [be it his] love for Biryani or his expertise in Bhangra dancing.”

Pakistan is not a place that is known for art, yet the country’s raging obsession with truck décor has led to an absurd and brilliant fusion of modern aesthetic tastes and traditional workmanship. Even in the most dangerous corners of the country, trucks have become unlikely bastions of the arts helping to employ many thousands of artisans from any and all backgrounds.

It is an industry that continues to evolve, and the spiritual ﬁgures that dominated imagery in the ‘50s have been joined by Lollywood ﬁlm stars and hippie-era psychedelia. With a stable future afﬁrmed by its absurd economic necessity, truck art is rolling on.

Blood and Beauty: Kashmir in Crisis

Pakistan’s cultural reinvention is spear-headed by its youth 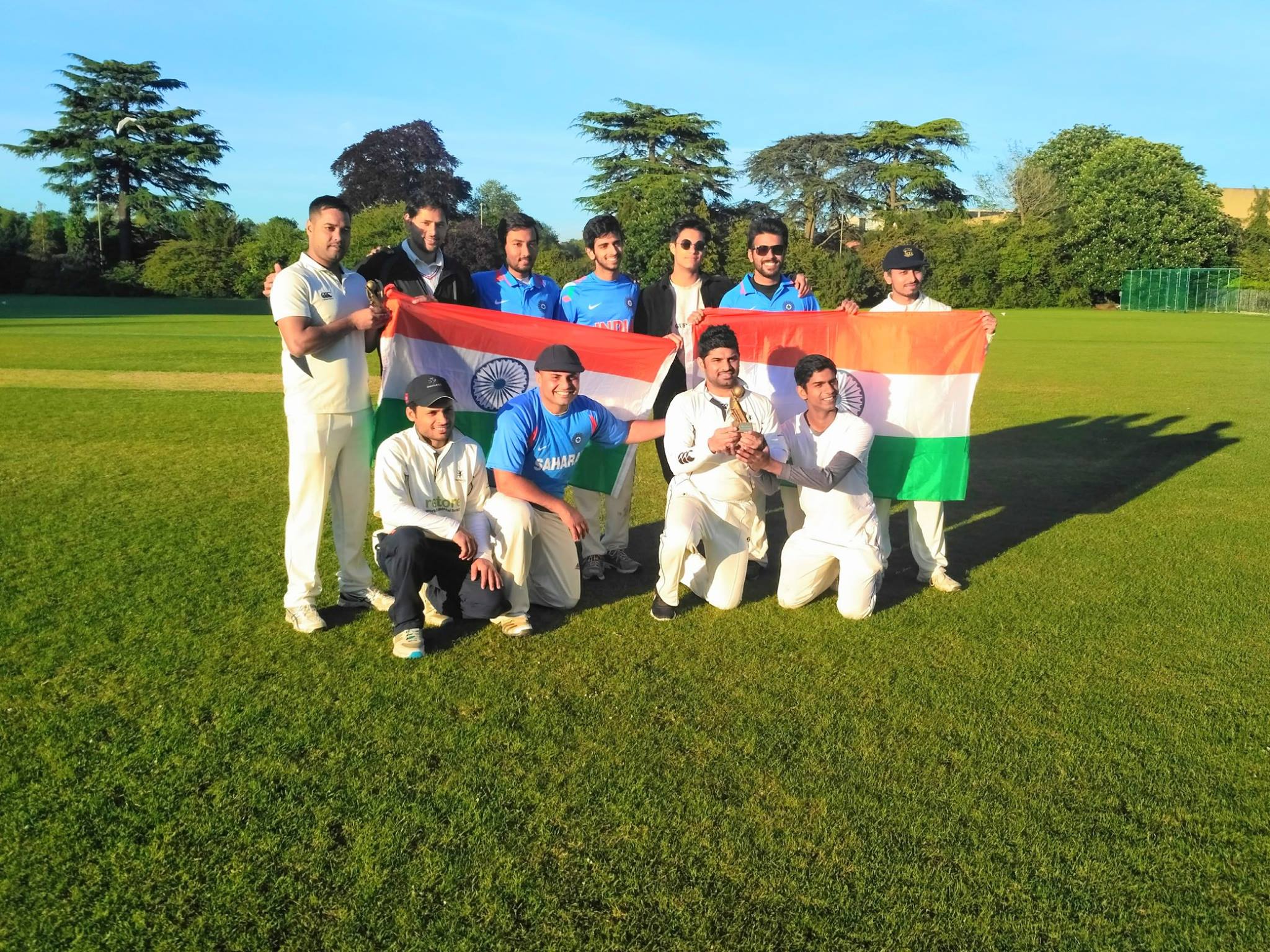