CherwellIndependent since 1920.
Blogs A life on the streets of Oxford 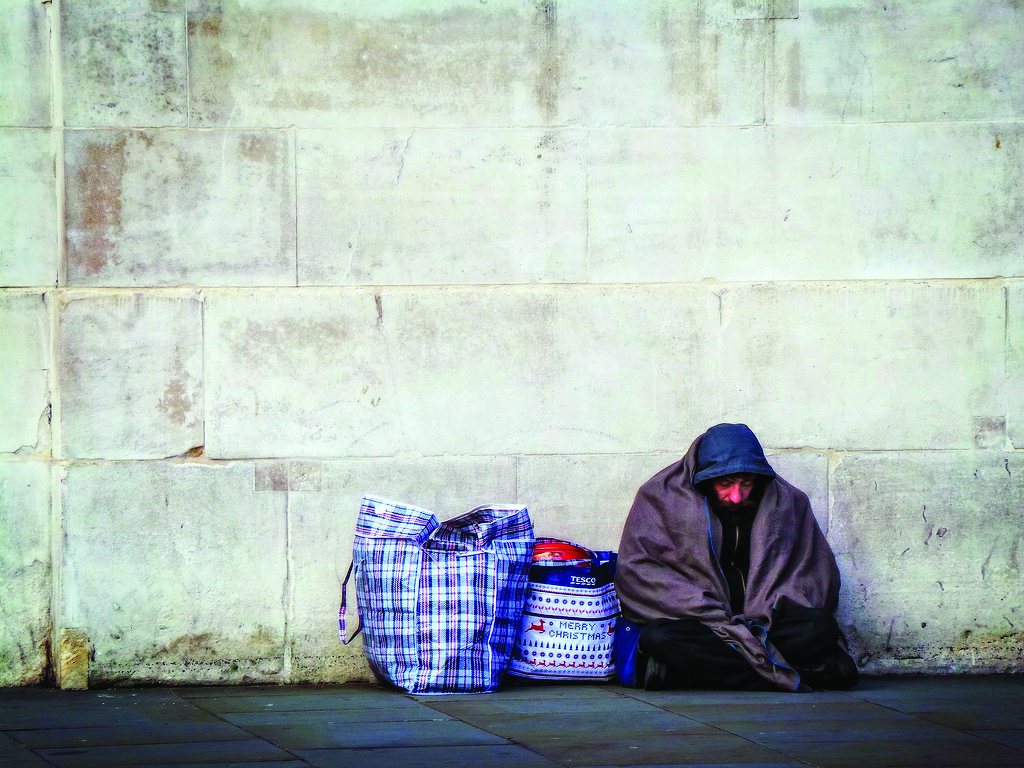 It was outside the History faculty, opposite the Odeon on George Street, that I saw him. Sitting stiffly in his one change of clothes, his sleeping bag beside him, was someone in circumstances it’s fair to say are unlikely to be experienced by the students who occasionally file past. I stopped for a moment while he sat there reading his book, then approached him. Once I’d introduced myself it wasn’t long before he (Chad) began speaking about life on the street and how he had come to be in this position. Learning of his time here since his arrival from Dublin 14 months ago on the promise of a job that never materialised, I asked if he minded dictating a short diary over the next three days for a student newspaper. He agreed.

Yet instead of producing three neat diary entries as planned, the ensuing evening meetings became more a discussion of the vicissitudes of homelessness itself. What struck me about his account was that rather than regaling me with a series of stories and complaints to win my sympathy, as can so often – and understandably – happen, Chad spoke openly about things that could easily have done the reverse: crime, drink, and drugs, as well as his preference for being on the street rather than in hostels and shelters, which anyone here will know are usually what money is most cried out for on the streets. Here are Chad’s dictated diary entries and some conversations that followed:

‘Got £5. Bought two strips of chicken and 4 cans of £2 Sainsbury’s cider. Stayed here. People asking me what drug deals I seen about. Most of the night people bought me food. Don’t go to sleep till about 5 o’clock in the morning. A friend’s dog was limping so got him some antibiotics. Slept for not long, not properly. Through the week nights are quite quiet. Had to get methadone for old heroine addiction down Cowley road.’

‘Reading my book today. Bought some new socks from Primark because my feet are really sore. Saw my friend at the Gatehouse (a homeless shelter). Saw my friend Sharron. Just been wondering round, checking after my friends.’

At this point his friend Sharron arrives with a dog, which after a lot of coaxing finally sits down. She makes some complaints about how tired she is, not seeming to notice me on the steps next to Chad. When she does she immediately asks for change, as if by reflex, and Chad hurriedly explains why I’m there. She apologises profusely, saying she had no idea, and then reverts to talking about how tired she is. “Its like having needles stuck in my eyes” she says, pointing at them imploringly to Chad, “you know what I mean?”

Sharron, who has known Chad since he arrived and even suggested he try living on the very spot we’re talking on, chips in as Chad talks about the uncertainty of homeless life, the importance of trying to keep your begging spot clear of drug deals to maintain its good standing with the police, and of coming across a certain way to other people on the streets, who can be as predatory as they can be supportive. “It’s dog-eat-dog out here,” he says. Speaking almost to sky, Sharron despairingly throws up her arms, “it’s like living in a fish tank.”

“As soon as they see something’s the matter with you,” Chad continues, “they do something. You can’t show too much.”

“That’s what I mean,” Sharron says,”That’s why I’m here like this. Chad’s one of the only people I can cry in front of.”

There’s a lull in the conversation before a couple of police cars squawk past. “That’s right, get them out of town” he says, grinning.

They then talk about footwear. She mentions how she had once been without shoes for 5 months out of principled revulsion of damp shoes, picking up a lot of cuts until a friend of hers started crying and pleading for her to wear shoes. “That’s what it took.”

Then, despite Sharron’s protests, Chad shows me the red raw soles of his sodden feet. I promise him some anti-septic tomorrow and Sharron asks what kind it is. I say I’m not sure exactly, but that its a spray-on. Suddenly, and for the first time, she lights up with genuine joy on his behalf, “Spray-on! That’s your favourite Chad!”

‘Had some appointments about benefits. An outreach person approached me, they give me some forms to fill in for benefits, saying they might have accommodation. I been out here too long and winter’s coming. Appointment for my prescription. Spent the day here.’

“Basically, that’s what my day consisted of,” he concludes, almost with disdain at its monotony. “It’s mostly the same thing, because for most of us… its a very lonely life.”

In acknowledgement of the sheer number of times he has had to get up to tip people off on the whereabouts of drug dealers, he mentions how as a homeless person it’s nearly impossible to stay clear of drugs altogether. ‘This life is not all about sitting here begging.’

Drugs are obviously a large part of it. He talks about the strength of a heroine addiction, speaking quietly under the confident, clipped voices of passers by. “You need heroin because if you don’t have heroin you’re ill, you’re very ill. And you have to pick up money each day to get heroin. And you have to get on a methadone programme, and that’s what I’m on. So I don’t have to go looking for it every day.” He warns that the drug has gone so downhill over the years “its actually no longer worth doing.” The impurities its now mixed with are evident in its colour he adds, “heroin’s actually not far from quite a white creamy colour, and they’re all sat there smoking and injecting a brown substance.”

Crime is another, sometimes unavoidable, part of living on the streets. A lot of people on the streets have been in prison he says, including himself. “I’ve done 15 years of prison. Obviously I was in prison recently, I haven’t been out that long, only a few months.” We don’t go into what this was for, but with some strain he admits that he’s burgled in the past, “not in houses, not in houses, nothing like that… shops, shops, cigarette boxes, you know what I mean.” I say at least that’s not malicious, but he looks down and says its still a crime. Yet the distinction between stealing from a home and from a business is nevertheless important to him, “something like taking a kids play station, that’s something I couldn’t do.”

Why has he not been able to find a place? The answer to this is a familiar combination of personal tragedy and inadequate services. A cruel succession of deaths, beginning with his wife and ending with his next partner dying of pneumonia, left him in a depression that shattered not only his work life, but his whole reality. How have the authorities helped? “The probation service and the prison service, they’re no help at all — its alright giving us methadone and medication, but they’re not rehabilitating us. No one’s even spoken to me about my friend dying. No one. And they all know, they all know, but not one of them’s said ‘do you want to talk about it Chad?’… No counsellor, no bereavement officer, no nothing. And these are the people that are supposed to be looking after me. I’ve lost my friend, my partner, my home.”

Yet there’s still hope. The other week he he spoke to a doctor, who out of his own kindness wrote up a report on his mental health which was passed on to housing authorities to improve Chad’s bid for a place. And – at Christmas – his parents are coming over from Ireland, about which he is as happy as he is apprehensive. The meeting will come as a big shock to them since for the last 5 years he has been too ashamed to explain his real situation. A middle-aged man with children, he has so far been too embarrassed to ask for help, but struggling with the thought of another winter, of again joining the ranks of human lumps slumped outside shop doorways on freezing Christmas nights, he is finally finding the courage to be honest with his family.

He’s keen to fight the stereotype of homeless people as idlers who decided to sleep on the street: “when we were 18 and left home… they think we have nothing going for us. But I’ve had a good life, do you know what I mean, I’ve had a great life.”

“I don’t want nothing now, because every time I get something, it gets taken away from me. And its scary that, you know what I mean.”

What sort of place would he like to live in? He immediately dismisses the idea of a shelter or hostel for the homeless, saying he can’t deal with them. “They’re all full of drink and drugs, and I want to try and get away from that. That’s why I stay out here on the streets, I stay away from that. And they’re not going to give me my own place because you have to earn that, you have to go to hospitals and that.”

What can we do? With renewed passion, he says that better than giving money to homeless charities, people should talk more to homeless people and buy them things directly. His dislike of charities is partly based on personal experience. One time for instance, he recalls discovering a photograph of himself in the Oxford mail which had been taken (without permission) of him sleeping on the street, in order to front a campaign for Crisis. When he approached the charity itself for shelter however, he was turned away. At the same time, he is also uncomfortable with the general attitudes of charities toward the homeless. Campaigns such as ‘Your kindness could kill’ and ‘Don’t fund the Habit fund the Charities,’ while well-intentioned, have done much, he feels, to damage the kind of caring attitude we should be encouraging in public life, instead dehumanising all who beg as merely self-made drug addicts. But, he nonetheless stresses, “don’t give until you know where the money goes.” He believes that more positive interactions between the homeless and the public, along with a government that takes proper responsibility for its citizens, will be the way forward. As evident from the deep appreciation of so many on the streets just for being acknowledged, it is clearly not just proper homes these people need, but a proper society.

And people are trying. Just as I get up to say good bye a girl comes along with a copy of Dubliners which she had promised to buy to remind him of home, along with some earl grey tea, which she said she wanted to introduce him to when she heard he had never tried it. He cautiously takes a sip. “Right,” he says impressed, “it does taste like something special.”