Having won just three of their ten games this season, the Light Blues went in as underdogs, and Oxford dominated for large phases of the first half.

But the Cambridge defence, marshalled from full-back by captain Charlie Amesbury, held firm, and were clinical in attack.

Man of the match Chris Bell scored the only try of the first half, scooting around the back of the scrum to cross in front of the Oxford supporters to take the Light Blues into the break 5-3 ahead.

Archie Russell – brother of Scotland international Finn – then took advantage of an overload on the left to score in the corner, before the immense Will Wilson took the gap to three points with his try.

But skipper Amesbury crossed following a rolling maul, and Cambridge saw out the win in a professional manner.

Despite going into the clash as firm favourites with the bookies, and win a record of eight wins in ten games this season, Oxford started frantically, as both sides made basic errors in the opening minutes. Cambridge number eight Buchan Richardson had a try disallowed as he was tackled into touch, but neither side was particularly dominant.

However, Sam Edgerley and Ed David turned on the style, and Oxford dominated the next twenty minutes with several bursting runs into the Cambridge 22.

Wilson and ex-Saracens flanker Andy Saull both breached the Cambridge defensive line, but their offloads were both intercepted just as it looked like the Dark Blues would open the scoring.

But a turnover from second row Andrew Hunter turned the tide soon before half-time. It led to a series of dominant attacks from Cambridge, who had a try held up by some last-ditch Oxford defending.

And when Cambridge, the better side in the scrum despite their comparatively lightweight pack, drove forward on the five-metre line, scrum-half Bell sold Conor Kearns with a dummy, and ran in to score next to the posts.

Oxford continued to put the pressure on before half-time, but could not turn the screw – although a Kearns penalty took the deficit to just two leading into the interval.

The second half started scrappily, but a lengthy stoppage after 50 minutes due to a serious injury to flanker Matt Watson disrupted Oxford’s rhythm, and Cambridge attacked well.

While they were not always dominant in terms of territory or possession, Cambridge were clinical going forwards, and did not suffer from the same nervy handling that plagued the Dark Blues.

In truth, several backs were nowhere near their brilliant best, and Oxford’s attacking phases were too predictable for most of the second half.

After a spell of possession in the final quarter, Cambridge spread the ball out left, where Ed David was isolated against Russell. The winger missed his tackle at the most vital of moments, and the Scotland youth cap crossed to give his side some breathing space.

Wave after wave of Oxford attack followed, with Dom Waldouck and Dan Moor marauding forward in the centres and Wilson driving penetratingly through the middle.

Finally, the pressure told, and Wilson’s converted try gave the Dark Blues hope of a comeback.

But Cambridge did not panic, and stuck to their gameplan of playing physical rugby. After winning a penalty in the midfield and kicking for touch, the lineout turned into a rolling maul to which Oxford had no answer. Amesbury, at the back of it, touched down to extend the lead, and Mike Phillips shook his nerves to convert – with only ten minutes left to play, there was little chance of a comeback.

Oxford never looked like scoring in the final minutes, and were left to rue their wretched first-half luck: had their barrage of attacks been reflected by the scoreboard, it would surely have been a very different outcome.

For Cambridge, it was a remarkable result against a side that had only been beaten by one team before today’s encounter. The Light Blues were resolute in defence and ruthless in attack, and, in the end, were good value for their win. 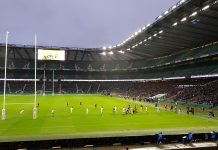