Ilya and Emilia Kabakov’s ‘Not Everyone Will Be Taken into the Future’ is an exercise in alternative perspectives, the most pressing of which transports the viewer back to a childhood way of viewing the world. The exhibition opens with Ilya Kabakov’s 1964 painting, Soccer Player; at first glance, the image is innocent, sky blue and yellow and simplistic like a children’s illustration. But peer through the silhouetted body of the player and the landscape behind depicts the rural town Uglich, home to one of the USSR’s first hydroelectric power stations that was built in 1930s through forced labour.

Ilya Kabakov, rejecting the approved artistic style of the Soviet Union, supported himself as a children’s book illustrator from 1955 to 1987. Although he made his own work alongside this, the perspective of the world that he presents us with is a consistently childlike one. In Soccer Player, there are several juxtapositions at play – the idyllic rural image and the industrial label, the innocence of the image and the sinister contextual undertones – acting as a reminder that a visual representation of society can be at odds with its reality. This is a truth that becomes increasingly apparent in the process of growing up.

Ilya Kabakov is self-consciously aware of the juxtapositions he creates within his work, with the text accompanying the images often offering new or jarring interpretations. Tested! (1981) presents an image, not unlike those found in the iconic Labybird Classics children’s book series, of a woman collecting her returned party membership card after her commitment to communism has been questioned. The text beneath the picture is celebratory, and yet the reality would have been drastically different. Under Soviet regime, trials to establish the loyalty of a citizen to the party would not have been a cause for joy, but more often a death sentence.

The Man Who Flew Into Space from His Apartment (1985) was Ilya Kabakov’s first ‘total’ installation. Looking through the shards of an exploded door, the viewer is immersed in the artwork. The installation is bold in its challenging of the political regime in which it was created: the walls in the apartment are papered with Soviet propaganda, and the huge hole in the ceiling evidence of Kabakov’s desire to escape the oppressive society in which he lived (something he achieved in 1987, when he was offered a fellowship in Austria).

Despite the scale of Kabakov’s installations, the text that accompanies them still establishes them as illustrations for a larger story. Alongside a room filled with floated saucepans and kitchen utensils are the words: ‘When Olga Nicolaevena came to the kitchen in the morning she saw in the corridor numerous pots, pans and plates, which were flying in the air’. The language used by Kabakov to describe this work – simplistic, exploring a linear narrative, magical – is distinctly similar to that of children’s literature. This is Kabakov’s illustration, but taken from the pages of the books he worked on and enacted on a much more ambitious level.

The exhibition distorts perceptions of space, rendering the viewer powerless in a seemingly endless labyrinth of semi-dark corridors that catalogue Ilya’s Kabakov’s mother’s life. After a mostly chronological journey through the Soviet Union, one is spat out from this maze into a classroom, and a collection of Kabakov’s paintings from the 1970s and 80s. Looking at their work, one cannot help but be transported back to childhood, thrust into this helpless and ignorant position that paralleled the situation many adult citizens of the USSR found themselves in.

Kabakov may have begun his illustration of children’s books as a means of operating outside of accepted Soviet art regulations, but there are elements of illustration in all of his and Emilia’s work, telling the story of the state responsible for their oppression.

‘Not Everyone Will Be Taken Into the Future’ is showing at the Tate Modern until the 28th January. 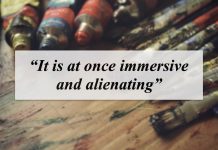 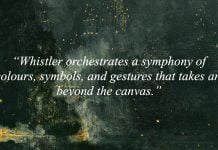 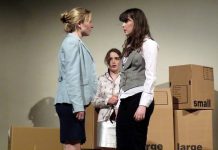 “To this I put my name”- Review: Casterbridge 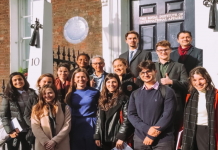