CherwellIndependent since 1920.
Life Dick and Dom: life out of da bungalow 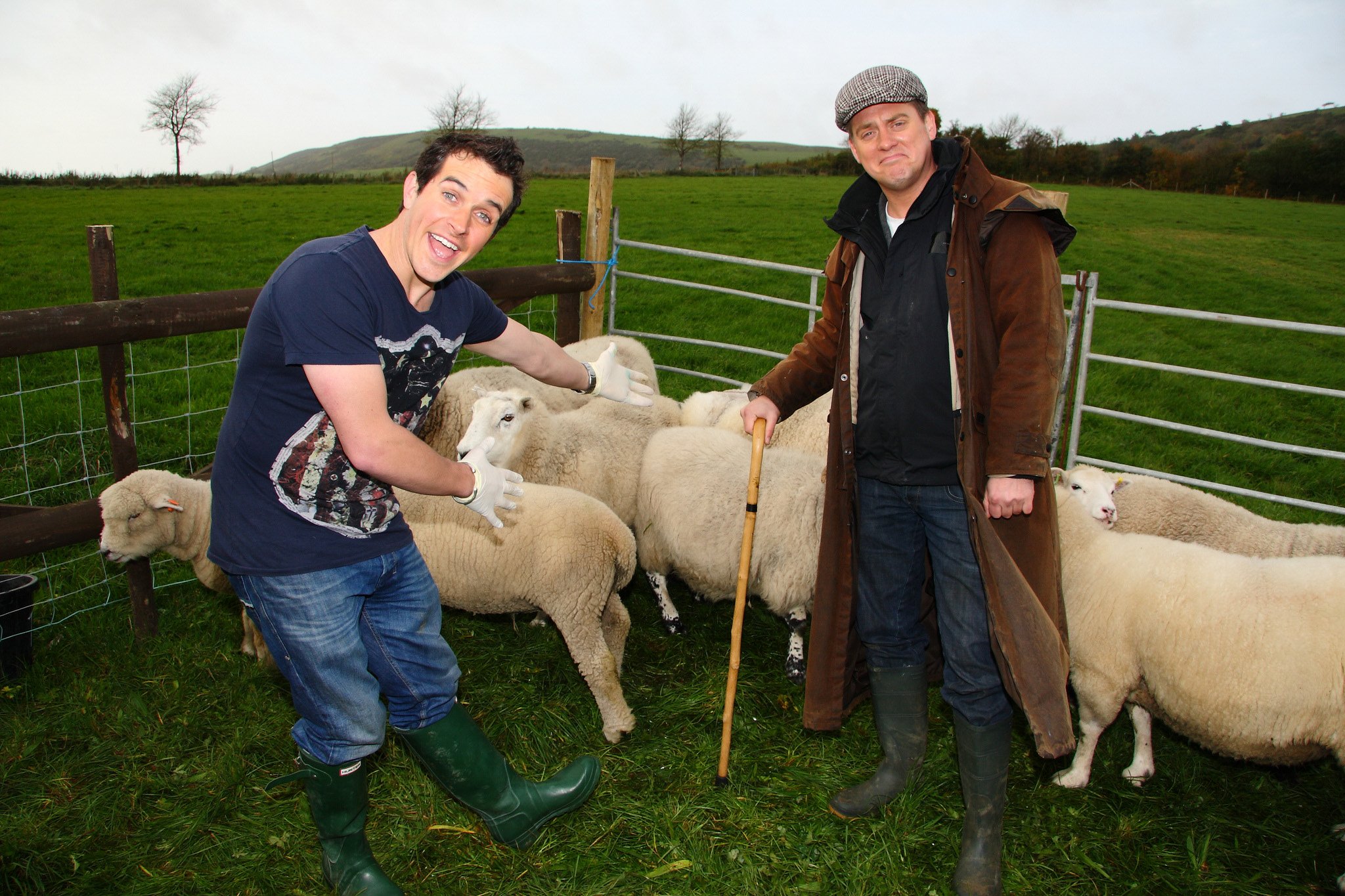 The opportunity to meet one’s childhood heroes is one that can only cause excitement. So despite the fact that I found myself sat mid-afternoon with two 40-year-old TV presenters in an empty room in a Cambridge nightclub, there was something thrilling about the prospect.

Not many people will recognise the names Richard McCourt and Dominic Wood. When I told my friends I’d met them, the overwhelming response was: “Who?” And yet at their peak, the duo were unstoppable. They had over one million viewers every Saturday morning, they won two Baftas, and their show was just the second children’s television programme to be mentioned in the House of Commons.

Indeed, for my generation, Dick and Dom are little short of legends. It is, therefore, with a certain trepidation that I ask them my first question. Every week, Dick and Dom in da Bungalow invited a handful of primary school children onto the show to take part in their games, songs and features.

As an eight-year-old, I myself applied to be on, filled with hope that I would get my fifteen minutes of fame. Why was it, then, that I didn’t make the cut? “We saw your application photo and we didn’t like it. We didn’t trust you,” Dom tells me. “Your CV wasn’t good enough,” retorts Dick, a crushing blow given how much of my childhood was dedicated to networking events and volunteering for local charities. “You had something weird and dark in your eyes that we didn’t trust, so we wouldn’t let you in,” says Dom. Dick reassures me nothing has changed: “And we still don’t trust you
now.”

If anyone has made it this far without a working knowledge of the show – what were you doing with your Saturday mornings in 2003? – then let me offer a quick introduction. Only the hardcore fans will remember ‘Yum Yum Yak’, ‘DCI Harry Batt’s Interrogation Game’ and ‘Prize Idiot on the Job’, but it is almost to impossible not to know about the game that plagued Key Stage One teachers across Britain throughout the midnoughties: ‘Bogies’. In simple terms, the game involved McCourt and Wood finding a suitable public space – be it a yoga session, a performance at the theatre, or a lecture at Bournemouth University – and shouting the word ‘bogies’ progressively louder, until their ejection. With scores measured on the ‘bogeyometer’, the game made no secret of its juvenility, but this was probably the main reason that the show developed such a cult following: it was simple, it was gross, and it was brilliant.

In fact, my own brother was kicked out of the Fitzwilliam Museum as a ten-year-old, after engaging in a game with his friend. When I told her that I would be interviewing Dick and Dom, my mother – still dismayed at the public embarrassment that it caused her on the Cambridgeshire parents’ dinner party scene – demanded that I hold them to account for this.

Dom reveals that he has been accused of “corrupting a whole generation… and that’s you now.” “So, all you lot reading this, you are corrupted by us,” adds Dick. “Apologies.” Indeed, Conservative MP Peter Luff complained in Parliament about the show’s “lavatorial content” nearly thirteen years ago. “You can join me in playing How Low Can You Bungalow?, a test to see your response to grossly embarrassing personal situations, largely of a lavatorial nature,” he said to Culture Minister Tessa Jowell, “Pants Dancers in the Hall of Fame, photos of children with underwear on their heads; Make Dick Sick, a game which I think speaks for itself; and finally Bunged Up, in which you play a character in a sewerage system avoiding turtle poos coming from various lavatories. “Is that really the stuff of public service broadcasting?” Are they proud of those accusations? “Not really,” Dom replies, but I sense that it isn’t something that keeps him awake at night.

Ultimately, Dick and Dom managed to make a very successful career out of acting like children, and it is clear throughout my time with them that they haven’t changed much. But I must admit that there is something strange about meeting them aged 40 and 41. Dom is now married, and has a ten-year-old son – and Dick is his godfather. “He’s very generous with them. It is very adorable, they’ve got some lovely Amazon vouchers [from him].”

“I don’t have children,” says Dick, who remains a bachelor. “He hasn’t got any children, but you can bet your bottom dollar when he does I’ll be about 90 – but I’ll still be happy to be an old, old godfather,” replies Dom. This back-and-forth between them is a feature of my chat with them: rather than just being an on-screen duo, Wood and McCourt are best friends in real life, too. And when so much of your success has depended on two personas so similar to their own, there is little room for reinvention.

As a result, it’s no surprise to hear that it won’t be a case of new year, new Dick and Dom. “Uhh, no. Very much the same. Stagnant, same, similar, boring dull,” says Dom. “It’s like a stagnant pond with like those kinda things…” replies Dick. “Duckwater!” “Frogspawn in it.” While my chat with them is hardly the most serious interview I’ve conducted – how could it be when my journalistic career has featured a job asking drunk second-year PPEists about the geopolitical questions of our time? – I can’t help but notice the pair’s frantic attempt to turn their answers into something absurd.

The pair spoke to The i last year, but very much as McCourt and Wood rather than Dick and Dom, and their comments were perhaps more interesting than might be expected. “The rules have changed,” McCourt said in that interview. “There’s not many things you can get away with. “Things like Bogies could be seen as anti-social behaviour. We did a game [Eeny Meeny Macka Racka Rari Dominacka Shickapoppa Dickywhopper Rom Pom Stick] where we put stickers on people’s backs without them noticing. “I don’t think these days you’d be allowed to be seen to be upsetting people.” “There’s not enough silly any more,” says Wood. “Everybody’s too serious.”

It is an intriguing idea that Dick and Dom are in some ways a relic now. Indeed, it is difficult to conceive of the show making it onto Saturday morning TV in 2018. While their comments might seem like a throwaway, it must say something about their attitude to entertainment that not being “allowed” to upset people is a negative. The generation that grew up with them are constantly labelled ‘whinging snowflakes’ by the press, but perhaps this is a sign that while those they entertained have grown up, Dick and Dom have not.

I try to move onto the political: “If you became health secretary tomorrow, how would you solve the NHS crisis?” Dick makes a low, farting noise. “We’re not intelligent enough for this,” he replies. What would they do if they met Donald Trump? “Just turn him upside down and slap him like a human piñata,” says Dom. “[I’d] see what comes out,” Dick replies. “What do you think would come out of Donald Trump, sweets or money?” “Chocolate coins! That covers both, doesn’t it?” How do they think they will find the heteronormative atmosphere in Cindies tonight? “I don’t know. But it’s lovely to be here.”

Their responses – an attempt to get away from anything remotely serious – firmly remind me that I am interviewing Dick and Dom, not McCourt and Wood. While at no point did I try to make this anything other than a light-hearted, jokey chat with them, it is difficult to escape the fact that I’m speaking to two men whose relevance is much diminished. I suspect that this is in part due to their refusal to grow up.

A career in children’s television, followed by a decade of spin-offs, charity shows and occasional appearances must be a bizarre existence, and behind the characters that they assume in public, there must be a real Richard McCourt and Dominic Wood: the middle-aged, slightly balding men getting by thanks to club appearances on a Tuesday night in Cambridge.

However, what is all too apparent is that Dick and Dom, the duo whose antics made us howl with laughter as children, are an odd pairing. They still crack me up, but in a strange, nostalgic way when I think of a simpler time – one without problem sheets, deadlines and the stress of living in the real world, and one in which putting your pants on your head and doing a dance was not only acceptable, but encouraged.

The two characters sat in front of me embody my childhood: they are carefree, stress-free, and, most saliently, remnants of my past.