The Polycephaly Monologues Review – ‘seamlessly combines the surreal with the naturalistic’ 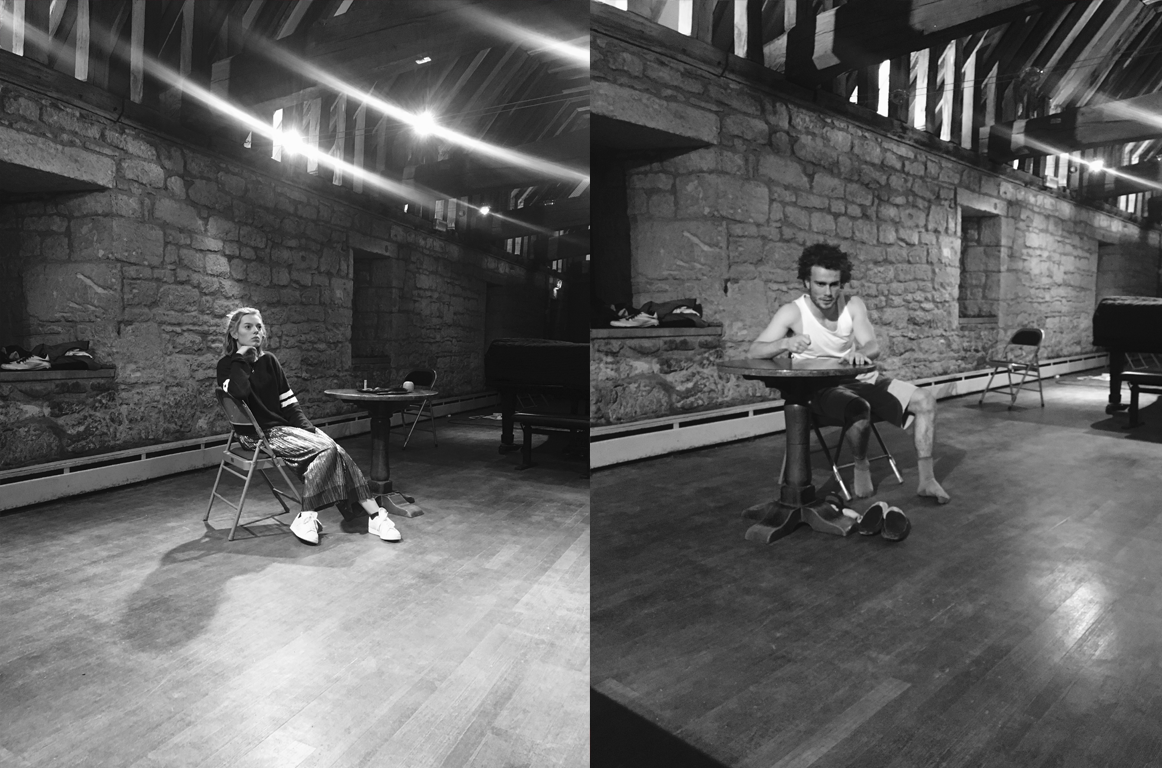 It’s almost as if the cranberries represent something else… Writer Nick Smart’s The Polycephaly Monologues is an intense insight into three very different minds, all with their individual quirks and worries. Contextualised by a variety of fruits, this performance is high-energy, with the undercurrent of a very original style of writing, and seamlessly combines the surreal with the naturalistic.

The audience walk into the Pilch to find the actors already onstage, putting on make-up or scoffing the remains of a plum pudding. Instantly, we enter the atmosphere of the piece, and fall silent to watch the action before us. No time is wasted in making us uneasy, and slightly confused at the water-filled rubber gloves hanging from the ceiling. Cherona Chapman’s lighting keeps the piece fluid, and maintains this sense of unease throughout, though not so much as to overwhelm the audience. Ella Benson Easton’s set is used to great effect, though minimal, it does its job well, and the actors all master the space, keeping these long solo speeches from sagging.

We start with Robbie Fraser’s portrayal of a mentally unstable widower, tangential and deeply affecting. Though this monologue takes us through the erratic thoughts of a rambler, Fraser manages to hold our attention, through the talk of plum pudding to the darker, more gruesome talk of worms and decaying bodies. This is by far the strongest piece of writing, and Fraser carries it off with delicacy, moving between despair and elation in order to keep the audience focused and interested, with no signs of a struggle on his part. Progressing from one subject to another at break-neck speed, the chaos of his thoughts is brought to the forefront, though it does become difficult to decipher what the script is trying to say towards the end.

In the next monologue, we see weaker writing, but greater comic potential. Hannah Jaques’ character doesn’t take herself too seriously, and wonders what it would be like to have a lipstick baby grow inside of her. The absurdity increases in this section, and Jaques talks of crying out of her vagina, and whether her screams could bring down the roof over her head, and that of her boyfriend and his lover. Preoccupied by her make-up, Jaques is straight to the point, distracted, and in this we see a certain honestly arise from her words. As before, however, the script goes round in circles, and starts to lose direction, though the actor makes the most of her situation.

Finally, and most surreally, Alec McQuarrie comes into the spotlight, perplexed by the bare stage he has been left with. Before long, he goes off to the side, and brings back on a paddling pool, filling it with water and a mysterious red liquid, (later we find out this is, unsurprisingly, cranberry juice). His confusion is not at the stage any longer, but at the question of what it takes to become a cranberry. He needs to think like one, dipping his head in the pool, and trying to submerge himself as much as possible. Here, the script starts to fade from the forefront, and it is McQuarrie’s physicality which takes centre stage, dynamically following his threads of thought, using the space around him to his advantage. He takes the audience with him on his energetic attempts to turn into a cranberry, or to produce one in any way he can. This culminates in him ‘drowning,’ inventively portrayed as if the water is rising from the pool and filling the whole stage, probably the most exciting moment in the whole piece, the audience was held in suspense as he held his breath, uncertain of what was coming next.

The script attempts to be continuous, but it is unclear as to what each monologue is trying to say, both individually and as a body of work. Though misguided, this is an enjoyable show, and each actor is brilliant in their own right.

It’s almost as if the cranberries represent something else… Writer Nick Smart’s The Polycephaly Monologues is an intense insight into three very different minds, all with their individual quirks and worries. Contextualised by a variety of fruits, this performance is high-energy, with the undercurrent of...The Polycephaly Monologues Review - 'seamlessly combines the surreal with the naturalistic'