Oxford SU encouraged students not to use departmental facilities, though college teaching will not be affected 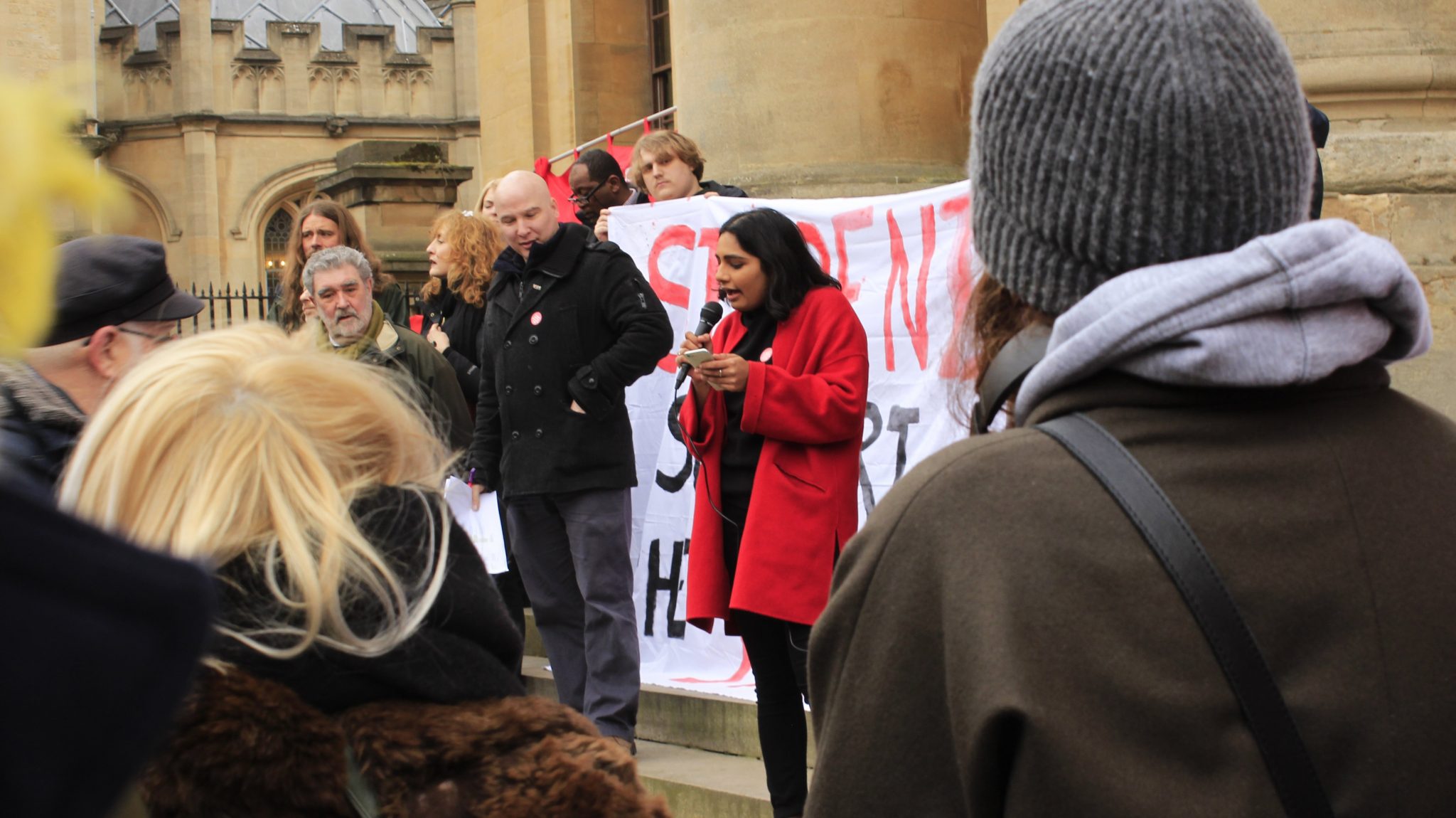 The University and College Union (UCU) strike against changes to academic staff’s pensions began on Thursday, causing widespread disruption to lectures and classes.

Strikers were joined by crowds of supporters at picket lines, including hundreds of students at a demonstration outside the Clarendon Building, on Broad Street.

It follows a warning from the UCU that summer examinations may be affected if the dispute continues.

Thursday marked the first of 14 days of scheduled strikes, beginning with two this week.

Pickets were organised by UCU Oxford at the Science Area on Parks Road, the Bodleian, Examination Schools and the Old Road Campus, and were attended by both striking lecturers and supporters.

There was also a strike rally outside the Clarendon Building. A large crowd of students gathered in support of staff and to listen to speeches from UCU members, student activists, and local councillors.

The president of the Oxford UCU branch, Garrick Taylor, stressed that the decision to take industrial action was not one he took lightly, and he feared for the financial situ-
ation of strikers.

He told Cherwell: “There are households where both the occupants are staff members and are on strike, and so those households are going to lose all their income. It’s not exaggerating to say that people are not going to be able to pay their rent, their mortgages, their daily living costs, and things like that.

“We’ve never done anything like this. For me, on a personal level, it was a huge decision to ask people to strike when I know it’s going to cause such financial hardship.

“We’re doing everything we can. Our union branch has put aside at least £10,000 for a hardship fund, and anything we can get on top of that from people donating will be put towards alleviating the financial worries striking staff have.

“We’re never going to have enough money to fully compensate people so they are going to struggle. Oxford is so expensive to live in. Nobody has spare money. We’re not all well-paid leading academics. A lot of us are on post-doc wages, on casual contracts, so it’s really going to hit hard in that respect.”

Oxford SU and many college JCRs encouraged students to support the strike by not going to departmental lectures and classes, though teaching in college will continue as normal.

Oxford SU said “crossing picket lines to use facilities in departments or libraries could be perceived as not being in support of the strikers.” They suggest that if students wish to support the strike, they should “do work from home or go to a cafe or public library.”

This stance does not sit easy with all students. One fourth year told Cherwell: “Tutors and academic staff are absolutely justified in being aggrieved by changes to their pensions.

“But, it’s also important that our student union supports the interests of students. The SU now supports finalists being left with potentially no teaching whatsoever for three weeks, which is deeply worrying.

“Oxford SU is there to represent students, and while we should show our support to tutors in other ways, we should not be supporting the strike.”

Many other students, however, came out in support of the lecturers, telling Cherwell of the importance of student-lecturer solidarity.

Milo Thursfield, a second year PPEist at Wadham, told Cherwell: “Our uni staff have given us a lot, from teaching us to supporting students in their fight against higher tuition fees.

“It’s really important to show solidarity with them and continue to oppose the marketisation of higher education.”

The walk-outs from lecturers are a response to proposed reforms of the Universities Superannuation Scheme (USS), the fund which provides the pensions to academic and academic-related staff at universities such as Oxford.

The proposed changes would replace the current defined benefit scheme for income below £55,000 to a defined contribution system.

The umbrella group Universities UK (UUK) insist the changes are needed to reduce the supposed £6.1 billion deficit in the USS’s budget. However, UCU have criticised the methodology used to calculate this figure, which they say has exaggerated the financial problems of the pension fund.

The union also cites independent estimates that the changes would cause a typical lecturer to lose £200,000 in pension contributions by the time of their retirement.

Two days of strikes will take place this week with plans for three strikes in 7th week and four in 8th week.

Assuming negotiations do not reopen between UUK and UCU by then, 9th week five days of walk-outs, with staff striking from Monday to Friday.

UCU have warned that new strikes might then be announced, with UCU General Secretary, Sally Hunt, warning that exams “might not be taking place if they don’t come back to the table.”