The vintage sound of The Vaccines

As they prepare to drop their fourth album, indie-rock sensation The Vaccines tell Susannah Goldsbrough what it's like to be old fashioned rockers in a post-punk world. 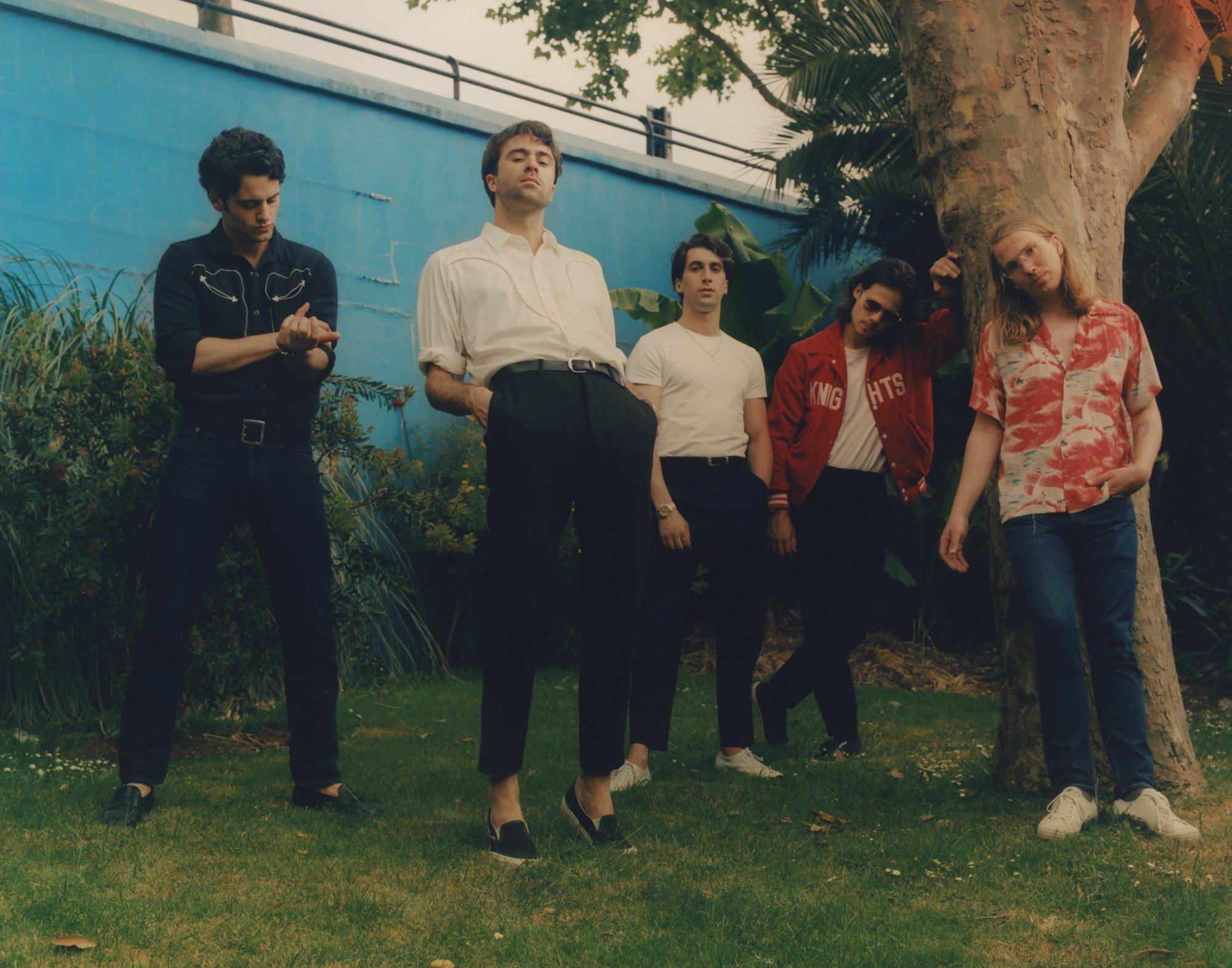 “It’s hard for rock music at the moment” muses Justin Young, front man of The Vaccines. “It’s always been on the front foot culturally. But hip-hop is the exciting form of music right now. Where that leaves bands that are making rock music today, I don’t know. Will we be heralded as…as…”

“The Armageddon?”, chips in Freddie Cowan, lead guitarist, and the darker, quieter, unjustifiably chiselled foil to Young’s floppy-haired, high-energy eloquence. His line may have been a comic throwaway, but it captured a wider theme running through the pair’s conversation at the Union earlier this week. Weeks away from the launch of their fourth album, the west London based indie rock group are now some years beyond the first unsteady flush of fame, the thrill of a euphoric review in Clash and sellout shows at North London pubs.

They’re far from done with music making, but their thoughts seem to be turning towards what they’ll leave behind, to legacy, and the state of rock seems to be weighing on their minds. For an indie-rock band, the pair seem fairly uninspired by the genre at the moment. “Rock follows too many of its own rules”, says Young, “it’s like jazz 50 years ago, in that it operates within quite stringent four walls.” Cowan agrees. “If you’re a four-man band you’re still operating in the wake of The Beatles and The Stones, and you will be until someone can reinvent rock in a way that breaks new ground.”

Speaking to me a few days later, Young makes no attempt to present his music as the radical edge of pop. “I probably wouldn’t start a band that sounded like The Vaccines today, but it’s the path we’re on now. When a song comes on the radio, I kind of love the idea that people will go ‘Oh, this is The Vaccines’.”

I wonder what it’s like to have a self-conscious public image of being old fashioned, in an industry so often fuelled by a desire to transgress and to make change. Young is unconvinced that all artists are genuine innovators. “If you look at glam rock, on the one hand it was very much on the front foot and original, but equally everyone was doing exactly the same thing. It was all a result of the obsession with space age, and dressing like David Bowie. “First and foremost when it comes to art or entertainment, you have to feel fulfilled and to do what makes you happy. You’ll find solace in a certain world or genre, and you’ll make songs you like for people like you. For us, playing rock ‘n roll comes naturally.”

Anachronistic is not the only image problem the band has faced over the years. When they first found fame, they received a certain amount of ridicule from the press for their so-called privileged backgrounds – an old broadsheet article surfaced detailing the four-bedroom South Kensington apartment Cowan’s mother had apparently gifted him as ‘a party flat’. I ask Young if he’s with the implications that his background excludes him from being a true indie rocker, but he doesn’t seem to be in any kind of identity crisis. “Art has always been a pursuit of the privileged, particularly rock ‘n roll. Some of the most hedonistic characters from rock and roll folklore came from privilege, most recently The Strokes. It’s funny that we’re considered posh and privileged but they were considered glamorous because they were New Yorkers.”

The band’s preoccupation with the image they will leave on the eyes and ears of the world probably owes something to their awareness that rock bands don’t have an unlimited shelf life. Young is brutally honest about the toll live performances can take. “It’s really hard when you have an adrenaline shot on a daily basis and then you’re starved of it. I think that’s why so many people in bands end up in an early grave and turn to such unhealthy habits, because there really is nothing quite like it.

“I come back from tour and I’m like, what the fuck do I do now? We haven’t really been performing solidly for 18 months now, and I’m still finding it hard to just sit at home on a week night and accept that that’s what people do. They turn on the TV and make some food and just relax. And I’m still working that one out.” Cowan agrees. “It’s an unbelievable transition to go from playing to the dressing room where your tour manager is just fiddling with the printer.”

It’s hardly surprising that they struggle to adjust to ordinary life – big festival gigs can draw crowds of 30 thousand. Young describes his own desire to put musicians on a pedestal, to view his favourite pop stars as higher beings “beamed from space”. You can spot the effects of fame in the pair’s casual comparisons to their idols, in how easily they move from themselves to Radiohead or The Stones in the same sentence, but neither Young nor Cowan is your typical spoilt pop star. “When you play to a crowd of 30 thousand people, you’ve got to assume 20 thousand have been dragged along by their friends. Not everyone worships at the Church of The Vaccines…”

The time for sitting on the sofa and pretending to be normal won’t last much longer for The Vaccines, soon off on tour with their new album, Combat Sports. Press releases frame it as a return to their original sound, after the experimentation of their last album, English Graffiti. With heavy guitar riffs, bitter-sweet lyrical turns and what Young calls “the primal, urgent, energetic sound”, we’re certainly back in the world of anthems like ‘Post Break-Up Sex’ (still my go-to break up song). My favourite track of the new album, ‘Your Love is My Favourite Band’, takes a witty, self-referential approach to the musical cliché of ‘the love song’. Young likes to tell people that he’s only interested in writing about love and sex, so I wonder how he keeps two themes with light years of cultural baggage fresh. “Love is impossible to describe in words, so I find it funny that we spend so much our time trying to do so.” But that impossibility is the point, as Young says, “it’s just very hard to define so I think people will always continue to try.”

The sound may be a return to the band’s early years, but some fundamental things have changed. With the departure of drummer Pete Robinson, the band has absorbed two new members in recent months, in the form of Tim Lanham and Yoann Intonti. Such a major personnel shake-up could easily have heralded the end of the group’s successes, but in fact they seem re-energised by the changes. Which is not to say it hasn’t been a difficult few months. “It was a real shock when Pete first said he wanted to leave” Young tells me. “We talked about continuing as a three piece but it really felt like we’d lost something. Like we were an animal that had lost a leg. But we sat down and we were sure we wanted to keep doing it and to make another record.”

Lanham and Intoni had already toured with The Vaccines, but in becoming full members they brought something new. “All of a sudden, 40 per cent of the band were over the moon to be there and bringing fresh energy into every room we walked into. We had a fresh perspective, which stops you making the same record over and over again. It’s funny but I wonder if we’d be sat here talking now if that hadn’t happened.”

I wonder how his positivity about the future of the band, its new members and old sounds, sits alongside the toughness of the lifestyle he makes no attempt to hide. How much longer can they really keep doing this? Young is optimistic. “I don’t think the lifestyle is sustainable – sleep is one of the most important things for a long life and you don’t get any of that when you’re in the band – but we still massively enjoy making music. It’s a very strange life, but as we get older I think we’re refining it. We’re getting better at keeping ourselves alive.”

That’s a pretty sombre sentiment from a guy who’ll spend the next few months hearing thousand-strong audiences singing his lyrics back to him. But as we’ve established, it’s a tough time to be in rock ‘n roll, especially when the adrenaline recedes and you’re back to sitting on the sofa on a week night, wondering how to be ordinary.