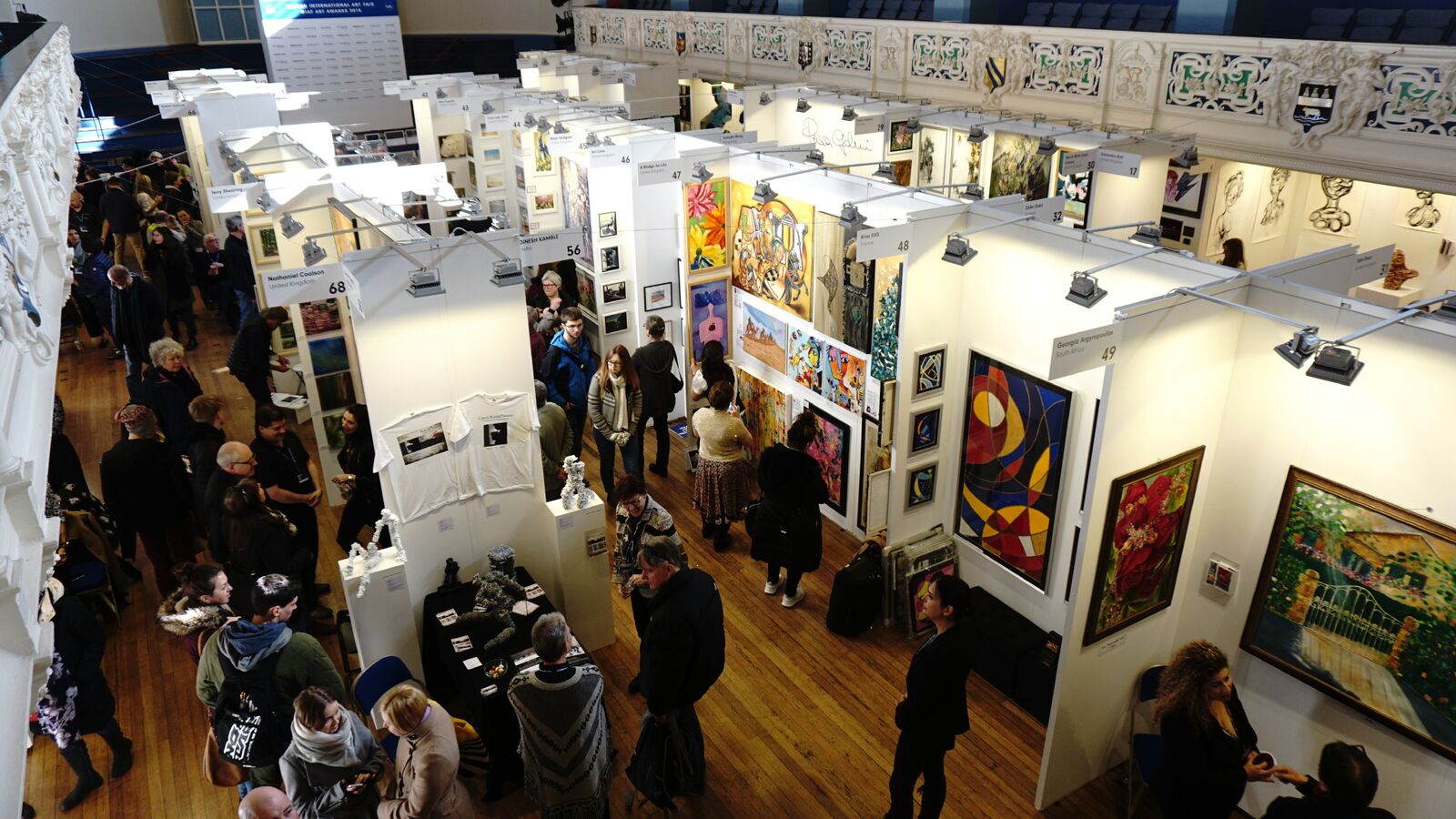 On first stepping into the Oxford International Art Fair, hosted at the Town Hall, my impression was a sense of slight confusion. The layout of the booths was standard, but the ways in which the artists and their works had been organised appeared to lack coherency. What I found was a festival lacking in polish and coherency but delivered exciting newcomers and an air of friendly accessibility in spades.
It was clear straight away that the fair would live up to its claim to be “international”, exhibiting not only artists from Britain, the US, or Western Europe, but a good proportion of Eastern European, African, and Asian galleries on display. A family-friendly and buzzy atmosphere abounded and was being actively encouraged by the artists and their agents.
It is certainly the case that the layout and use of space left something to be desired. The excitingly cavernous space offered by the Town Hall’s upper level was not fully utilised by the formulaic and linear arrangement of the booths. However, this was made up for by the efforts of individual artists to make use of small spaces and flat lighting and to present their artworks in an exciting manner anyhow.
Of particular note in this regard was the work of Manu Alguero, a Spanish artist who focused attention on a singular, dramatic sculpture made of bronze in the centre, which the eye was drawn towards by a series of rough and heady images of women’s torsos in black paint.
Alguero’s work was an international standout and positioned conveniently with a number of similarly outstanding artists from the USA, Hong Kong, and Romania. The gathering of these displays gave the distinct impression of a larger art fair, curated and well-spaced, an idea that could have been demonstrated far more effectively for the rest of the fair.
Indeed, it would appear that the fair would have benefitted from a clearer vision of what kind of artists it sought and the types of art they created. Reducing the number of artists displaying works would have allowed for more focus on these really extraordinary ones, which would have lent more credibility to the event.
Certainly, in offering a large number of artists an albeit small space each, the fair did really create the sense that Oxford has a role to play in contemporary art, and is clearly an accessible location for artists from a variety of backgrounds.
However, this positive aspect of the fair was undermined by the fact that some artists were not given adequate space to reveal their excellent pieces. Others who were, while talented, perhaps not as visionary, were afforded equal or larger spaces.
A more critical curatorial approach may have revealed the extent to which Oxford could become a viable hub for contemporary arts.
Of course, with the existence of multiple art galleries around the city, such as Modern Art Oxford, means that the fair could be viewed as contrasting those galleries as a forum more willing to grant exposure for up and coming artists.
Such exposure was successful, creating a less pretentious environment for contemporary art to be displayed than larger fairs or galleries. The presence of emerging artists, keen to invite viewers to follow them on Instagram and like them on Facebook, stood in stark contrast to the attitude of networking and nepotism that often pervades larger artistic get-togethers.
Children were encouraged to ask questions about the works and in many cases interact with them. Although the works were out of the price-range of a student budget, the air of affordability and accessibility was a real pleasure to experience, and made up in many ways for the lack of coherency that the show possessed.
Overall, the experience was an encouraging one, suggesting that the fair has the potential to consolidate and grow further. By retaining some of the clearly most talented artists, those with potential for international recognition, Oxford International Art Fair could develop into a highlight of Oxford’s cultural calendar.
It was refreshing to see that the fair really was an ‘international’ one, and that there were multiple opportunities for interaction with artists. This enabled aspiring collectors, who are usually unable to participate in the multi-million dollar world of more established contemporary art scenes, to feel as though they were making an investment in a worthwhile piece of art.
Hosted in a small location, in a city not renowned for art in the way that London is, Oxford International Art Fair was certainly able to pull in some impressive talent. It will be interesting to observe how the process of hosting the event changes over the next few years.