Teddy Hall Ball, held on Saturday of first week, offered the optimal stomach lining for a ball night. Pizza is definitely a must, and Cotswold Pizza Co. were there to resolve those cravings. For those who wanted something a bit more interesting could turn to Jamon Jamon Paella, who had one massive pan going and offered some great bowl food.

The two undisputable highlights of Teddy Ball food, however, were certainly Nando’s and Anna Mae’s Mac ‘n’ Cheese. While the food unfortunately was not available all night, anyone who felt cheeky early on in the night could grab a Nando’s chicken for the dancefloor– definitely suitable for a long night of drinking. Yet the mac ‘n’ cheese was the best that could be offered at the ball. With different flavours and toppings, if the massive bang of mac ‘n’ cheese was not enough to get someone’s mouth watering, their fun and varied menu certainly was. Perfect for stomach lining, drunk food or even just a yummy snack, Anna Mae’s can definitely be considered a necessity for any future balls.

Ultimately though, Lincoln College Ball at the end of second week fulfilled anyone’s dreams for food at a ball. I could have, and to be fair almost did, spend the whole evening eating something different. Following from the theme, ‘Viatores’, each quad had food themed to a different city. In Istanbul, we were treated to baklawa and kebab wraps– no need to trek down the road to Hassan’s at the end of the night. In Florence, we could grab a pot of polenta chips and a slice of undeniably the best pizza in Oxford from The White Rabbit. Finally, Barcelona had Westgate’s delicious Los Churros Amigos as well as delicious paella, with the best thing being that you could just return throughout the night for top ups.

As if that weren’t enough, there was a whole cheese and wine room, as well as alcoholic milkshakes being served by Alc-au-lait in the JCR next to a tequila luge. Which brings me onto the drinks, which included much more than just random vodka mixers that you could get in someone’s room pres for Bridge. Loads of cocktails were around, with mojitos being especially popular, as well as craft beer and wine. Ultimately, if someone didn’t leave Lincoln Ball well fed and suitably ‘hydrated’, then they must have been doing something wrong. What else could be better to keep someone going at the best Silent Disco in Oxford/Istanbul, and ultimately throughout the best foodie night in Trinity.

With tickets sold out in under three minutes, ‘Apophis’ certainly lived up to the annual spectacle that is Keble Ball. While White Rabbit pizza and Jamon Jamon paella seem to be this year’s crowdpleasers, making their presence known at more balls than one, Keble also mixed it up with tasty meat-free options that kept most from renouncing their part-time vegetarianism a few drinks into the night. Taste Tibet’s momos and chick pea curries proved popular, alongside Oli Baba’s indulgent halloumi fries, topped with enough pomegranate seeds to least in part validate the £100 entry. A mere sighting of the dessert options on offer confirmed the conception of an inevitable food baby, thanks to Naked Dough’s generous scoops of honeycomb cookie dough and even a taste of home comfort, provided by Crumble Shack’s warm apple crumble. If Apophis indeed marked the end of life as we know it, at least it was with a generous mixture of custard, wine and crumbs down our dresses and jackets. 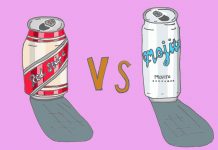 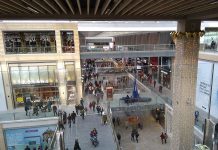 Eating on a roof terrace in the sun 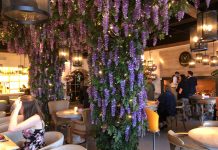 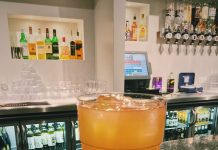 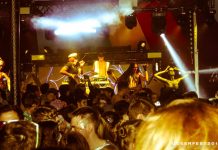