Roy Celaire aims to become an academic anthropologist to "work on the issues confronting members of the black community in Britain." 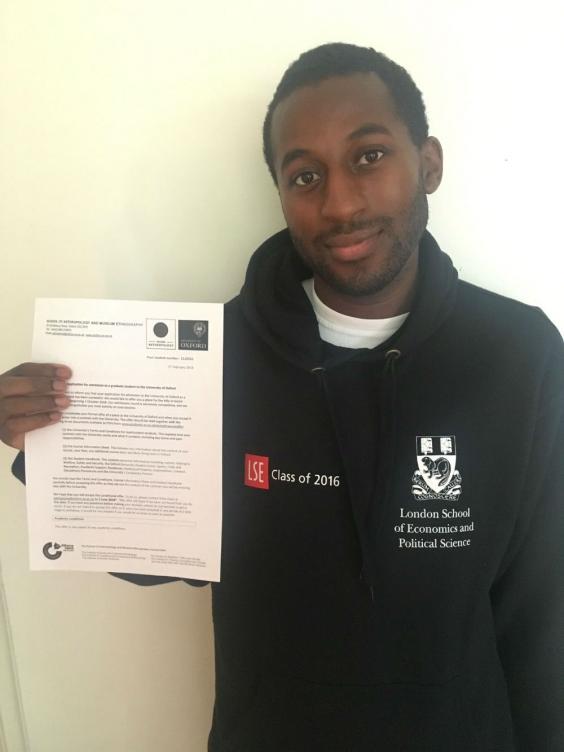 A prospective Oxford student has received widespread support for his crowdfunding effort to raise enough money to take up MSc studies this academic year.

Roy Celaire, who is a first-generation student, aims to become an academic anthropologist to “work on the issues confronting members of the black community in Britain.”

Roy is currently short of his target by just under £3,000. Last year, the University of Oxford agreed to defer Roy’s place, when he could not raise the £30,000 fees required.

His crowdfund has drawn support from across the U.K. so far, including from Cambridge University Professor of Classics, Mary Beard.

Growing up in Hackney, east London, Celaire attended the failing Homerton College of Technology, now “closed down due to incredibly low attainment, gangs and violence.” He later became homeless after his mother abandoned him aged 17.

Moving to Brentwood in Essex from Hackney, Roy became the first member of his family to go to university when he took up a place at the University of Southampton to read Sociology and Social Policy. However, he was forced to drop out after his first year, due to the financial pressures of commuting and meeting rent bills.

Nonetheless, he remained undeterred and enrolled as a mature student at Brunel University in London, graduating with a degree in Anthropology and Sociology. He then attended LSE for a Masters in Gender Studies while continuing to work full-time.

“I was having to work 50-60 hours a week just to keep myself and pay my rent as well as studying. Somehow I managed to graduate with a Merit but when I told my tutors that I had worked full time throughout the degree they were stunned,” Roy said of his time at LSE.

Following an offer from Oxford for further study, it was whilst working in Waitrose that a customer suggested Roy set up a crowdfund.

Roy told Cherwell: “The journey has been overwhelming, in that I did not expect the immense support I have received to date. I’m truly grateful to all who have donated, regardless of whether it was a £5 donation or a £1,500 donation.

“Many have commented on the fact that there are not many black people at Oxford in general and at postgraduate level in particular, and we are talking about those born in the U.K., not international students. People have expressed concern over the lack of black British academics in the U.K. and also shown their amazement at the deep costs of postgraduate study.

Roy added: “The donations have now started to dry up, the last few were from me asking colleagues to donate.

Regarding the attention his crowdfund has attracted, Roy said: “The comments and support have touched me deeply, as it showed me that I was not alone and that people could see and appreciate the efforts made to get to my present situation of having a place at Oxford.”

He also noted: “My mentor Jon Blair CBE has been amazing, so too has Professor Mary Beard, who has tweeted and donated. Mary has been extremely helpful and I’m so grateful to her for her support. I would like to thank them both publicly. I want to thank everybody at Keble as they have been very helpful, patient and understanding, regarding my situation, since last year.”

Roy writes on his GoFundMe page: “I am incredibly moved by the generosity of so many people and I hate to be asking for so much money but I can assure you all that I will try to repay your faith in me by giving something back to society as an academic one day.

“To the best of my ability, I have persevered so as to not let circumstances beat me, but now I feel nearly beaten and this is probably my last chance to put myself on the road to my dream.”

Donations to Roy’s crowdfund can be made here, or by visiting https://uk.gofundme.com/hackney-to-oxford