Even before Arctic Monkeys had started talking about what Tranquility Base Hotel and Casino was actually going to be, a casual fan could tell that the group were steering away from the dynamic, groove-centred brand of indie-rock that catapulted their previous release into ubiquity. Pictures of stern thirty-year-olds in suits looking pensive hardly screamed of past themes of lust, adolescence and nightlife. It was clear that the Monkeys were entering into a new era.

However, I don’t think many expected their newest release to be quite as off-the-wall as it turned out to be. Abstract metaphors and dreamscape imagery, sung over psychedelic, lounge-pop instrumentals made Tranquility Base Hotel and Casino a challenging listen for even the most open-minded of fans. The melodies were less catchy, the drums less prominent, and the punchlines more subtle.

To some, Arctic Monkeys had strayed too far. They were no longer the gritty, loud symbols of youth and disobedience that fans had initially taken to. To others, the challenging nature of the newest album was a welcome breath of fresh air. It was an album that was truly different from anything on the scene at the time; it was the product of Alex Turner’s genius, that fans were able to fumble around in, trying to understand and explore.

And this was exactly the risk of putting out a project like this. By releasing such an abstract project, fans separated out into likers and dislikers of the new music, and there were concerns for the future of the once immaculate Arctic Monkeys brand. So what made the  Monkeys take such a risk? And why do artists take risks like these in general?

A good place in time to start thinking about these questions is just after the release of the Monkey’s fifth album AM. In NME’s highly praising review of this album, Mike Williams suggested that AM was so good that it secured them a permanent place in history, and that the band could “do whatever they want, sound however they like, and always be Arctic Monkeys” from that moment forth. This kind of bold talk is likely to have played a part in making the band feel comfortable enough to release something so out-there.

However, the situation they found themselves in post-AM, was not as simple as this. Yes, AM secured their place in history, but it also captured millions of fans around the world, and with that came a certain level of pressure. Putting out such an abstract project was not only an artistic risk, but they also risked losing millions of eager listeners, along with their attention and money.

Artists rarely benefit from such a move. Album sales are almost always lower: AM was one of the top 20 albums in the charts for 42 days, whereas Tranquility Base Hotel and Casino dropped below 20 after just six. On top of this, reviews are often mixed: AM has a Metacritic rating of 81/100 compared to Tranquility’s 76/100.

There are some exceptions of course. When Kendrick Lamar released his landmark project To Pimp a Butterfly, it was a risk. It was not as much of a risk as Tranquility, but with challenging instrumentals and a more fluid song structure, it was a risk all the same. Lamar’s album, however, rather than suffering as a result of its ambition, is now often praised as being one of the greatest rap albums of all time, and boasts an obscene 96/100 rating on Metacritic – a rating only surpassed by 3 other albums.

However, this kind of tangible reward is rare. The Monkeys did not suffer greatly at the hand of their risk-taking, but considering the omnipresent-super-band they seemed on a path to become, they missed out on a lot.

Yet, this is where the intangible benefits of risk-taking are so important to recognise, and why Tranquility Base Hotel and Casino is such an important record. Arctic Monkeys did something so much more fulfilling and important than make a popular album – they created something different. By letting go of industry distractions like money and fame, the Monkeys were able to create something truly weird and wonderful that, long after they have stopped making records, is going to inspire kids to make weird and wonderful things too. And that is arguably worth way more to an artist and, crucially, to the world of music than any AM-esque album.

Tranquility Base Hotel and Casino is a symbol for artistic integrity, and a reminder of how important it is for artists not to get bogged down in the shallow dreams of ‘success’, and to just make something freaky and new. 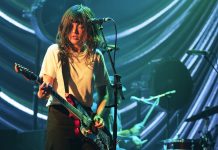 The desire to be elsewhere: a look back at some of 2018’s musical highlights