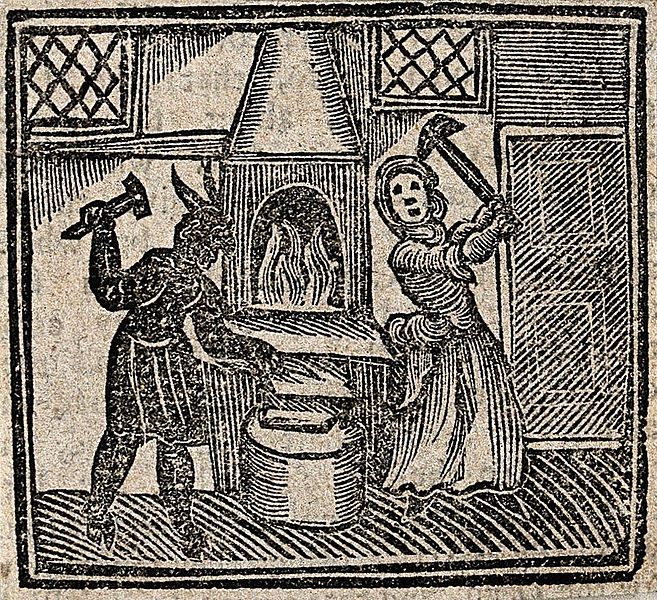 The “Spellbound” exhibition at the Ashmolean stands in stark contrast to its light, airy surroundings. It is housed in a windowless, dim series of rooms, with the artefacts sporadically spread throughout. It’s delightfully creepy, especially the sections where the artefacts are resting on the glass above you in chimney-like structures, forcing you to walk into dark little alcoves and crane your neck up to see them. The displays are enhanced by the art installations that are placed alongside them. Katharine Dowson’s ‘Concealed Shield’ is an installation inside a symbolic chimney where the viewer is surrounded by scratching noises and red lights, giving the impression of being surrounded by demons or other unseen forces. It is an extension of some of the key elements showcased within the exhibit, reflecting folk-lore and customs about protecting the home from witches. Other striking installations include Ackroyd & Harvey’s ‘From Aether to Air’, which shows off a crystalline cast of a human body, and Annie Cattrell’s ‘Veracity 1 & 11’, dedicated to the significance of fire in magical lore.

Other highlights of “Spellbound” include the preserved human heart encased in a special heart-shaped case, and the collection of love rings with inscriptions intending to bind their lover to them (matched up with the modern-day tradition of love-locks, like on Pont des Arts). Some of these rings are really rather romantic, while some have weird, obsessive undertones. There’s also a big sword if you are into that kind of thing. You can also see preserved clothes that were found in people’s houses, where they were intended to ward off witches’ curses, although nobody quite knows why or how they ‘worked’. It is really jarring to see a collection of moth-eaten clothes, including a child’s dress and a single adult shoe, and be told they were found under the floorboards of a home in Kent. The exhibit also includes a collection of magic-related books, with gold leafing and diagrams of magical theory, for the manuscript enthusiasts of Oxford. The labels for the exhibits are sometimes weirdly placed so hard to match up with the actual artefacts but that also kind of makes it fun, to be able to look at something and have no idea what it is and be able to theorise, and then later finding out what it actually is.

The exhibit is free for Oxford Students, so make sure to bring your Bod card. Going through the whole exhibit will take an hour out of your day (maximum), so as an activity to do for free in Oxford it’s well worth seeing. The exhibit does get really busy, with the queue to see some of the exhibits up to three people deep. The time of day you go will affect how busy it is, so watch out for that. It’s a quick, engaging experience, and definitely worth a visit!