CherwellIndependent since 1920.
Comment Greta Thunberg – “we need both individual and systemic change” 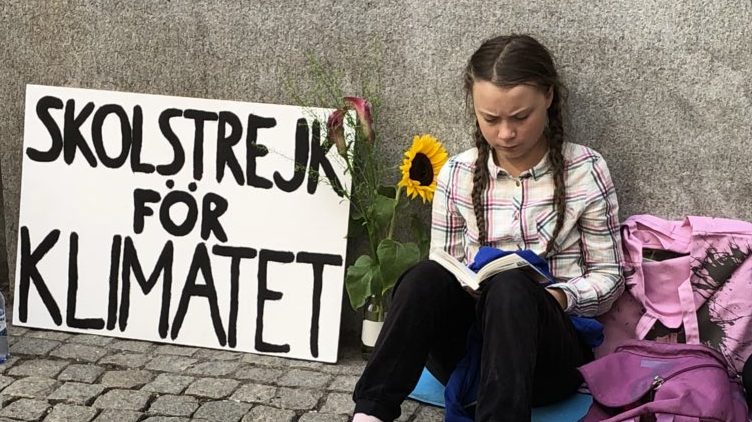 The last few years have been characterised by poor climate policies from countries that have traditionally been seen to lead the way.

Trump has pulled the US out of the Paris Agreement, the UK has recommenced with fracking, and Germany and Poland continue to engage in dirty lignite mining. Given this, targeting Sweden for environmental protest seems a bit misplaced. Within the EU, which already considers itself the bloc leading the way on climate action, Sweden is one of the more vocal and has pledged to be carbon neutral by 2045. The country appears a model of reform.

This is the myth that 15-year-old Greta Thunberg is trying to dispel.
“Sweden is one of the top ten countries in the world with the highest ecological footprint.
“We need to start reducing emissions by 15% every year, and in 6-12 years we need to have zero emissions. But emissions are increasing.”

Greta Thunberg’s project is simple: to force the Swedish government to align with the Paris Agreement and to “treat this crisis as a crisis.” At the moment, the EU bloc as a whole is set to exceed the emissions permitted for two degrees of warming – let alone those for 1.5 degrees limit prescribed by the Paris Agreement.

When I speak to Greta, she is preparing to go out on protest as part of her #FridayforFuture campaign. Instead of attending school on Fridays, she will be sitting outside the Swedish Parliament – “unless I am sick or something like that” – until they implement a suitable climate policy.

Yet for all Greta’s detached analysis of the situation, illustrated with statistics quoted in flawless English, there is a palpable frustration. When I ask her about the inexplicability of politicians’ seeming inertia on the issue, she pauses before saying, in a worryingly world-weary way for a girl of 15, “I just don’t know.”

Risking her own future to help safeguard others is a noble aim, but how does she deal with the unfairness of the whole situation? Why should politicians expect a student to change a country’s cultural attitude for them?

“Sometimes I am angry but mostly I am sad,” she says. “I try to think that maybe they [the politicians] don’t know, and when they know they will do something and soon something  will happen. But I need to do what I can. That is my
moral duty, and this is something I can do.”

Greta’s whole campaign is couched in this language of morality: she speaks of richer countries “stealing” from poorer countries and future generations, and of these same countries needing to make “sacrifices” to save our planet.

“It’s such a serious problem because what we are doing now, if we don’t change, we might reach a tipping point, a point of no return, and then there is no going back.” Activism can only do so much. “We need both individual change and system change,” she emphasises.

While her own way of life may seem extreme – she is vegan, refuses to fly, and actively avoids buying any new goods – it is clear that the only way for humanity to continue to have any semblance of normality in the coming decades is for this, and more, to become the norm.

Greta pinpoints the global population’s inability to grasp how urgent and widespread these reforms are as being caused by structural ignorance. Climate change is still considered a fringe issue, and it is often only due to localised weather disruption that any mention of it reaches national news. The first thing we should all do to be successful activists, Greta recommends, is to “read about the climate crisis so that you understand it
better and how important it is.”

It is this lack of education, and the utter absence of climate change from national discourse, that Greta finds so concerning. Indeed, her own discovery of  the dire consequences of climate change was almost by accident. She was fortunate enough to have a teacher at school that was interested in climate change and discussed it with their pupils. “I know not every teacher is like that,” she admits.

“They told us to turn off the lights, to save paper, and so on, and I wondered why. They said because there is something called ‘global warming’ and ‘climate change’ – that humans were changing the climate.

“I found that very hard to believe because if humans were able to change the climate of the Earth, that would be our top priority – everybody would be talking about it all the time but no one said anything and we didn’t do anything about it.”

In the face of such lack of education on the issue, Greta explains, individual action is the only solution. Across Europe, hundreds of people have emulated Greta in sitting outside their local government buildings, and her international media coverage has garnered the support of thousands more. Politicians from a variety of different parties have come to speak to her at her home in support of her work, and she has had a number of invitations from climate change activist groups. Just this week, she took the long overland road to Parliament Square to join George Monbiot, Molly Scott-Cato, and Caroline Lucas to address 1,000 environmental activists. She has reached international acclaim and was nominated for the Young Climate Activist of the Year award.

Yet Greta firmly points out that, however much it may look like a mass movement, the formation of a group is not on her agenda.

“It started as an individual, and I will continue to do it as an individual. I haven’t organised this at all – people do this as individuals, not as organisations or groups. I think this is what makes this so special – that one person did it by just sitting and it got international [attention].”

This is true. Although Greta makes videos for her 20,000 Twitter followers, their aim is less to attract likes and re-tweets for the sake of it, than for raising awareness. There are no flashy effects or action: they are filmed simply on a phone, in the Sweden woodland. She may segue into a rhetorical call-to-arms – “Why should we be studying for a future that soon will be no more and when no one is doing anything whatsoever to change that future?” – but most of her speech is educational. Urging the global population to “live within the planetary boundaries”, she is less a charismatic leader of a movement, than a too-easily-ignored pigtailed Cassandra.

Although the lead-up to the Swedish elections proved the formative period in taking Greta to international fame, as her protests helped to raise the issue of climate change nationally, she admits that her campaign probably didn’t alter their outcome.

However, this is nothing to do with any flaws in her campaign. She was unable to endorse any party – even the Greens – because none of them had policies drastic enough. Instead, there are were merely “better and worse alternatives.”

“Politicians, they need to win elections and win votes, and you don’t win votes by having a radical climate policy,” she sighs.

This complete lack of representation means that, while Greta speaks of herself as representative of the “future generations”, her movement is not primarily made up of similarly fresh-faced teenagers. On her Friday strikes, it is the office workers on their lunchbreak that join her outside the Parliament. The absence of climate change from any
kind of political debate means that it is not just those too young to vote that find
themselves disenfranchised.

After all, it was Greta herself that first emphasised the issue as one of dire importance to her parents. “I read about it more and more and maybe when I was about 11 years old my parents started reading about it with me. They became very aware of the climate crisis.”
She was lucky, she adds, to have their support, and she had “a very good childhood.” While her mother toured Europe as an opera singer, she and her father – a “housewife”, she says in a rare moment of giggly childishness – followed in train. Yet it is worth noting that she talks of these former carefree times firmly in the past tense. Waking up to the burgeoning nightmare of climate change she herself refers to as a seminal moment, perhaps signalling the end of youthful innocence.

She has certainly demonstrated a very adult grit. For all her social media popularity, there is no getting away from the fact that Greta’s campaign is primarily physical. Publicly protesting on the street, and unshielded by the computer screen, there is no avoiding the truth of how vulnerable she is. Has she had any bad experiences with climate change deniers?

“Yes,” she says matter-of-factly. “Some of them start screaming, and get aggressive, some of them are just shaking their head as they walk past.” She isn’t prepared to dwell on the subject. “It happens less than I thought.”

What seems more frustrating for her are less the angry and dogmatic, than those who are simply ambivalent. When I ask her about whether she has had any support from her peers, she answers flatly “No.”

Her teacher’s response was more mixed. “She supported me as a friend and as a human being, but not as a teacher.”

Nor do the outcomes of the Swedish elections seem particularly promising, as the major parties focused their campaigns mostly around their immigration policies. When Sweden does surface in the British media, which is rare, the narrative has focused around the rise of far-right, populist party, the Swedish Democrats.

Surely populism – with its simplistic, short-term solutions to complex problems – is the antithesis of the self-sacrificial, long-term plan required for effective climate action?

“I used to be scared of them, yeah,” Greta says. “But I’m not anymore because now I know about this climate crisis – and they don’t have a position on that, they don’t care about that…I don’t know, I haven’t thought about that much.”

And Trump? She pauses. “Some people say that Donald Trump is the best thing that could happen for the climate and for the environment because he’s so extreme, people rise against him. So, I don’t actually know. Maybe it can be good.”

It is this single-mindedness and tempered hope that characterises Greta’s campaign. Her own future may be uncertain – “sometimes I want to be a scientist, sometimes I want to be a politician” – her indecisiveness indicative of the endless Catch-22 that has defines any climate action. Be a scientist, researching climate change explicitly, but unable to convey your seriousness of your findings; or be a politician with a voice, but burdened with the distractions of short-term fixes that parties find rewarding in the election cycle.

But for the next few months at least, her fate is sealed. “I’m going to sit here and do what has the most impact. If that means recruiting people or just sitting here – I don’t know,” she ends, modestly.

Greta doesn’t claim to have all the answers. But her model for individual change can not only be emulated by us all, but is fundamentally necessary in a political climate where the most critical issues, both domestically and internationally, remain obstinately ignored by the parties meant to represent us.