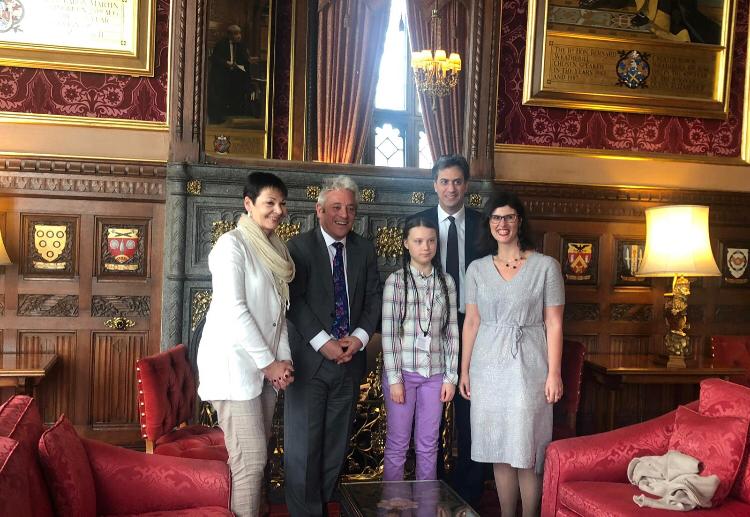 Layla Moran, MP for Oxford West and Abingdon, met this week with climate activist Greta Thunberg during the Swedish campaigner’s visit to Parliament.

Turning to Thunberg as she spoke, Moran said: “to put it back to you, you said ‘we promise to go back to school as soon as you listen to science. I am the education spokesperson for the Lib Dems and a former science teacher; that was music to my ears.”

Greta Thunberg, invited to Westminster after the international success of her school climate strike initiative, told MPs “[their] ongoing irresponsible behaviour will no doubt be remembered in history as one of the greatest failures of humankind.”

Later adding that the carbon emissions reduction, celebrated by parliament this year, was a product of “very creative accounting”.

Over 1,659 school strikes took place across 6 continents and 100 countries last month. Layla Moran applauded the strike taking place in her home city, telling press that she was “inspired by the 2000 young people in Oxford on Friday for Our Future”.

She continued to commend Greta Thunberg’s actions, claiming she was “awestruck to meet [her]”, and that Thunberg “reminds us that this is about young people and their voice and their future.

“I hope very, very much that today and everything else you’re doing has woken up parliament, and collectively, as we have seen in various debates…we need to now declare that national climate emergency, as have many local authorities.

“I would love if that is what the prime minister decided to do off the back of your visit today, and what I can promise, as just one of many parliamentarians, but I hope I speak for all the parliamentarians in this room, when I say thank you so much for inspiring us, you are the future and we need to make sure that we do everything we can within our power to tackle this.”

Writing in the spirit of Thunberg’s youth-centric movement, Moran’s article in The Independent stated that “to suggest that young people aren’t ready to vote at 16 is now clearly a fallacy.

“Imagine what a difference they could make to our political landscape if they were able to tip the balance in favour of MPs who put their concerns, climate change being top, first.”

Moran went on to condemn Brendan O’Neill’s recent critique of Greta Thunberg, in which she was described as “chilling” with her “monotonous voice”, terming his seemingly unprovoked attack on the young activist “frankly unacceptable.”

“What Greta shows to us all is that the myth that young people don’t care or are not engaged in politics is false. Young people care about their future, they care about the future of the planet, and they care that our generation is failing to protect it.

“In February, I led a debate on climate change in the House of Commons. The first on the main floor of the house in over two years. The shocking lack of government debate and action is what led me to do it. But it is unacceptable that it took place only after young people started to say this isn’t good enough.

“We must now seize the opportunity created by Greta. Politicians from all sides of the political divide must come together to tackle the biggest issue affecting not just the UK, but the world. First, the UK must declare a national climate emergency; local councils up and down the country are already doing so, but for the governments of the world to take note the UK must take the first step forward.”

Commenting after the meeting, Moran said: “I was delighted to meet with Greta today – she is such an inspiration and so driven. My call today to my fellow Parliamentarians is to heed her message and start by declaring that the UK is in a state of national climate emergency.

“I will work across party lines, as the Lib Dems have worked locally with the Green Party in Oxfordshire, to combat climate change.

“Greta has inspired and continues to inspire me on this issue.”