Being a Brasenostril, it has almost become part of my daily routine to shuffle in and out of groups of tourists huddled round a tiny door, emblazoned with golden fawns guarding its frame. This stubby passageway, it is alleged, was the inspiration for that famous encounter in C. S. Lewis’ The Lion, The Witch, and the Wardrobe. So pervasive has fantasy become as a genre that, just yesterday, I saw a group blanketed by their Gryffindor scarves stop at St Mary’s Passage to pay homage to a world of fantastical creatures and happenings that their beloved Daniel Radcliffe wasn’t remotely involved in. Fantasy has become as much of a staple of the literary and cinematic canon as that passageway has of every Oxford guided tour but has this persistence been for the same shared need for escapism through the ages, or is fantasy the discreetly blunt cultural mirror sometimes used to reflect on our reality?

During the aftermath of the Second World War and the less than jovial task of rebuilding the nation from rubble, there emerged a new focus for literature, especially among novels aimed at children. While some European countries began a sustained period of cultural reflection, such as that of the Italian neo-realismo movement, Britain, having been on the winning side, saw a much faster transition to seemingly escapist literature. It took until only 1950 for Lewis’ The Chronicles of Narnia to get underway with unashamed use of Greek mythology, talking animals, inter-special warfare, and a plethora of magical spells and ablutions. Though on the surface this highly-fictionalised world seems to be turning its back on harsh post-war conditions and discussions, C. S. Lewis was arguably the father of a sub-genre of fantasy that has since played a key role in the British literary canon: complex childfiction.

While the world of Narnia is fictional, its is not without parallel to the world in which C. S. Lewis was writing. Indeed, at the time of Tilda Swinton’s portrayal of the maleficent Queen of Narnia, film critic Stella Papamichael remarked that: “As the cold-hearted White Witch, Tilda Swinton sets the tempo for this bracing adventure. She is a pristine picture of evil, like the spectre of Nazism that forces the children out of London to the sanctuary of a country manor.” Though the dichotomy of absolute good vs. absolute evil perhaps lacked subtlety in viewing Britain as an unrivalled force for righteousness during the Second World War, symbolic undercurrents of that war and its aftermath embellish and shape the fruitful fantasies of Narnia, the most prominent of these being Christianity. It is a rather easily deduced theme of The Chronicles, particularly in The Lion, The Witch, and The Wardrobe wherein Aslan dies, only to be reincarnated and save the people of Narnia forevermore. Far more interesting though is the reason for its inclusion; the importance of contextual echoes in fantasy of this type become much clearer when we analyse the why instead of the what.

T. S. Eliot’s Wasteland, a slightly less optimistic fantasyesque prose-poem written post-First World War, descends from the moral and geo-political turmoil that resulted from the conflict. Lewis’ Narnia stems from the same literary endeavour: a chiming in on a possible solution to the vacuous space that inhabits any global sphere after such a large conflict. If the White Witch was an embodiment of Nazism, it was Aslan’s patriotically zoomorphic embodiment of British and Judaeo- Christian values that killed her and allowed for Narnia to live in peace thereafter. The preservation of loving thy neighbour and the stiff upper lip was the backbone of Narnia, and thus the post-war world it reflected; a mirror distant in its worldly content is not necessarily always different in its worldly needs. Such a bold, and not altogether very subtle moral to a bedtime story was not entirely uncontroversial even at the time of writing. Not only was fantasy as a genre still frowned upon, but the highly moralistic tone of the story was hardly comparable to the spiffingly fun and sanitary, knee-length skirt adventures of Enid Blyton.

Thus, Tolkien’s Lord of the Rings trilogy, published later that decade, though perhaps even more fantastically adventurous (hairy-footed hobbits and repugnantly ugly orcs are remarkably less common than centaurs or fawns in fantasy tales) already marks the success of novels that leant towards escapism without pulpit-prose. By 1954, the cogs of the British empire had rusted to near unworkability: with the Suez crisis just around the corner and the jewel of the Empire’s crown already independent, it was clear that Britain was declining in spite of Lewis’ beloved Aslanic values. Tolkien was not entirely without his religious symbolism: Gandalf the Grey coming back as Gandalf the White acting as the saviour of Middle Earth on many an occasion is not too dissimilar from Aslan and neither are the vices particular to each race in Middle Earth incongruous with the Seven Deadly Sins. However, by the time of publication in a world where the stubborn cold war was setting a new global order, and cultural engagement became more widespread, the need for fantasy as a reflection on society, or as an aspirational prophecy, was already diminishing. The need for an escape, where things can easily be classified as good and evil (and where good tend to eventually win), was already increasing.

The emergence of fantasy in film and television in the ensuing decades saw this trend continue. Cult classic fantasy films, such as Willow and Highlander, see a greater devotion to character complexity, narrative tension, and nitty-gritty combat. By this point, the genre has become far more grounded in narrative reality, but with far less attention to societal reflection or moral motivations. This is in part due to the art form: a fight on film is far more enjoyable to watch than a fight in print is to read and films in general are far more popular amongst the general public. But this is also due to the shift in society, especially in the engagement of classes in culture: gone are the days when, to be able to afford books and nights at the opera meant you were almost definitely also concerned with the politics of the day. Culture had ceased to be an elite domain, and so readers and viewers who needed an escape more than a reflection began to form the majority of fantasy consumers.

Jump forward the remaining decades until the present and it is clear that our fantasy narratives have taken on almost purely escapist forms. Harry Potter, though enjoyed by old and young alike as Narnia was, lacks any allegorical meaning: Harry Potter is no more a comment on New Labour than Game of Thrones is on Donald Trump. Though both emotionally and narratively complex, they are parallel worlds designed exactly as that: parallel, with paths never meant to cross.

As the media through which fantasy can be created have become far more widespread, so too has the audience; gone are the days when to be interested in culture often necessitated interest in politics. Instead, in culture, people increasingly sought an escape from daily life: as the globalist curve of modernity rendered individuals less and less important on a large scale, so their escapist desires increased. How often do we hear nowadays that people are going on weekend escapes to detox from society? Chances are they’ll take a book or a boxset with them.

If they want a real escape though, they’re best to avoid delving too far into history lest they find a moral treatise on British Christianity hidden amongst Minotaurs and fawns. 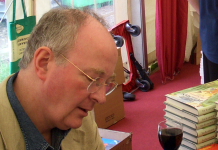 Philip Pullman’s La Belle Sauvage: His Darkest One Yet