Life Food Cool your beans! Iced coffee’s good for you!

With both summer and exams around the corner, a rush of caffeine is very much needed to get through the long days of working, or, at least, attempts to work. And yet, the bright sunshine and heat doesn’t seem to invite the hot cup of coffee that once provided warmth in the cold of winter. Instead, one craves something refreshing and reinvigorating to both cool down and bring energy levels up. Luckily, there is a creative solution that doesn’t include the unhealthy sugariness of energy or soft drinks – iced coffee!

Iced coffees, and other infusions and cold brews, open up the possibility for more creativity and flavour than your standard, hot cup of coffee, making it a versatile summer drink. Caffe Nero, for instance, has created an infusion called the “Espresso & Tonic” which combines a double shot of expresso with ice and tonic, giving you the invigorating feel and energy of a G&T without the regret. What’s more, they also add a dash of ginger to give it another dimension of brightening, summery flavour. Starbucks, on the other hand, have cold brews combined with vanilla or caramel, for those craving something sweeter.

Flavour aside, iced coffee is also scientifically proven to be more healthy than hot coffees. Not only will it never burn your tongue when you’re forced to quickly consume it in a rush, but its pH levels have added health and taste benefits. Iced coffees are more alkaline (or less acidic) than hot coffees, since coffee beans release acidic oils when heated. And because the human body functions better in a relatively alkaline state, it makes it more difficult to digest and induces a mad dash to the bathroom. Thus, because a cold brew is more alkaline, it helps your digestive system and means your stomach remains relatively stable. On top of that, reduced levels of acid also enhance and improve the flavour of coffee. The bitterness of hot coffee is also minimised because it is these very acidic oils, absent in iced coffees, that produce the sour taste. The reduced acidity is also much more beneficial for the health of your teeth and tongue, both minimising tooth staining and decay as well as odour-causing bacteria that contributes to bad breath.

However, although it’s always nice to treat yourself to one that’s made for you, the best thing about iced coffee is that you can make it yourself! Simply brew a hot, black coffee as normal (including instant!). Make sure it’s quite strong, as you’ll be diluting it. Place the coffee into a glass jar or other container and let it cool to room temperature for around 30 minutes to 1 hour, then refrigerate for another couple of hours. Finally, serve it as you like with some ice cubes, maybe with some tonic, or milk, or cream, or whatever else you fancy, and stir! 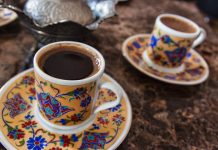 From Istanbul to Oxford

A Tale of Two Department Stores