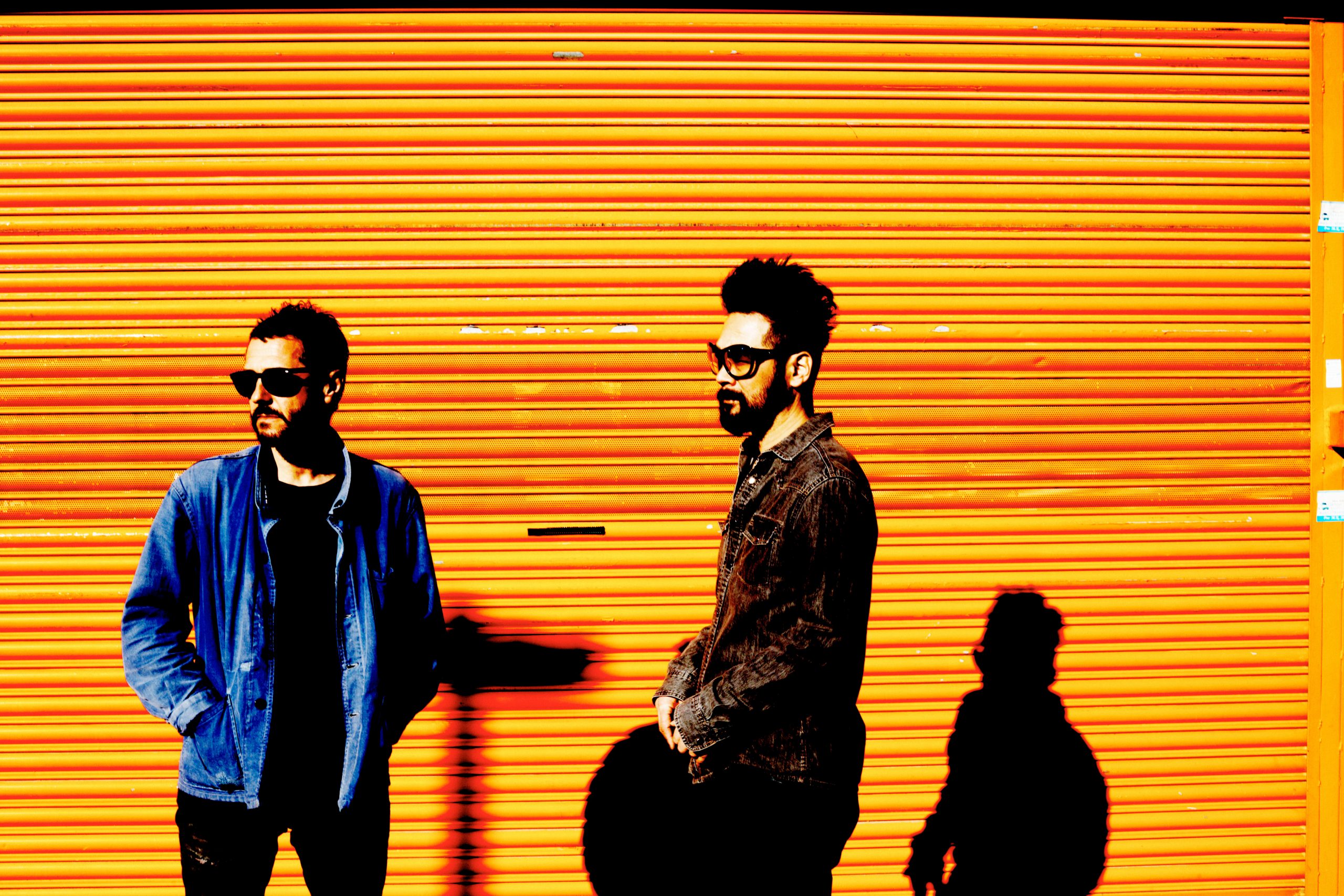 Talking to Grant Nicholas is like talking to a nice bloke you met at the pub who really likes music. With three platinum records and a host of international hits under his belt, you could forgive him for not having both feet planted firmly on the earth. Yet the singer-songwriter is clearly just someone who’s really passionate about what he does, and it shows.

We go straight into talking about Feeder’s newest album, Tallulah. Released on 9th August this year, the band are soon to embark on a tour celebrating it – including a stop at Oxford’s O2 Academy on 4th November. Grant sees the album as a combination of Feeder’s whole discography:

“We’re just doing what we do, I’ve listened to the album a lot and I’ve really worked hard to keep it organic and not too overly produced, we just want the chemistry and the sound of the band, the shows, what we are and my voice … it came in a very natural way”

Yet although it’s a “classic Feeder record”, there are individual elements that make Tallulah unique. Grant describes the first few songs as coming out of a summer of playing countless festivals, with others swinging back to examine the journey the band has been on since they formed back in 1994. Yet coherence is important to the singer-songwriter:

“as I realised it was going to be an album I started to sort of get more of a concept. I do on albums actually quite a lot, I try to have some songs that are connected in some way, for example on this record ‘Youth’ and ‘Shapes and Sounds’ is very much the same journey and the same story and each one opens Side A and Side B on the vinyl… I know in this world people don’t really care so much about the albums in their entirety, it’s more about putting something on the web or streaming, but it just means a lot more to me as an artist”

That’s not to say that it’s all the same though. Although Feeder have remained with a fairly similar sound and energy throughout their careers, they still aim to have variation within each different album, and showcase the different styles and sounds they create.

“The second half of the album is a bit more anthemic, there’s a song, Kyoto, which shows the more rock side of what we do as well, and I wanted it to have songs like that: I wanted the album to be interesting and sort of evolve in the second half. Because the first half is very bouncy and classic Feeder indie rock… I mean that’s kind of what we are as a band though and we like to have that freedom, we don’t just want to be a one-dimensional indie guitar rock band with just the same tempo and the same speed. But yeah I think the concept was positive, we feel like we’re in a good place at the moment, we’ve got nothing to prove, obviously when things do well for us it’s great, we just want to make music we feel is good”

Yet the journey that the band has been on has been more than a personal one. Over 25 years in the music industry has meant Feeder have seen trends come and go, and streaming revolutionise the way that artists are discovered and popularised. Originally from South Wales, the band had to move to London to even get a chance at a record deal and a larger fan base. Indeed, although Grant doesn’t consider himself part of a particularly Welsh music scene, he laments the “complete waste” of some artists in Wales, consigned to pub bands by the lack of opportunity. Yet has the music industry changed enough since his youth that this problem is now void?

“It’s very difficult because there are so many great bands out at the moment, it’s almost like you’re more aware of bands now because everyone can get their stuff up on streaming and up online, but before you had to scavenge, you had to either have a record deal or actually make a record. It’s a whole different new thing now. So although it’s really encouraging for bands, it’s also more competitive than it was, so it’s kind of swings and roundabouts. It’s great, but sometimes there’s an overwhelming amount of choice. But saying that there’s lots of really, really great new bands around. Lots of very encouraging stuff really”.

One of these great bands is the indie four-piece Novacub, which he says a current favourite. However, his music taste stretches across Britain on America. The Feeder frontman cites inspirations from British punk rocks and The Beatles to Boston and classic Americana like Neil Young, ultimately describing Feeder as having an “almost mid-Atlantic sound”. Yet the singer isn’t a big fan of undue comparisons – particularly being pushed into the same category as Stereophonics and U2.

“I don’t see the comparison between Stereophonics, we’re a completely different band to them. I see the fact that we both come from Wales, and we’ve had some songs that kind of crossover, the radio-friendly songs, but we’re much more of an indie-rock band. The Stereophonics are a different kind of band to us: we’re toured with them … we go way heavier that Stereophonics. We‘re just a different band.

“I don’t think we sound like U2 but I grew up listening to a lot of U2’s music, and maybe the way I sing is in that kind of melodic style – but we’re a very different band musically… people know Feeder… I don’t think there’s much chance that people would come to a Feeder gig and think it’s U2, we’re a different dynamic to that”

That’s not to say that Grant isn’t a fan of these bands, he notes that “they’re all great at what they do”, but wants to emphasise the heavier, indie rock aspect of Feeder’s sound. He personally sees Smashing Pumpkins, Nirvana, and Foo Fighters as the band’s contemporaries, although he acknowledges that he enjoys it when smaller bands are compared to Feeder in reviews. At the end of the day, however, “we’re not one thing in particular, but that’s what makes us Feeder”.

Although Feeder haven’t done anything hideously scandalous, having such a long career can lead to regrets along the way. One of Grant’s pet peeves is being seen as ‘the band that did Buck Rodgers’. Although he acknowledges that the indie classic played a big part in drawing in fans, and still sees plenty of radio play (and the occasional television advert), he doesn’t like being constrained by a song that wasn’t even intended to be for Feeder.

“I wrote the songs for a different band, sort of demo lyrics, and it became it became this massive hit for us when it was never meant to be a Feeder song. It was quite a different sound for us at the time, but it’s become an indie anthem now and everyone knows it. As a writer it’s not my favourite song, because the lyrics were never really written as a finished song, it was just a song for a band and if they liked it they were going to rewrite it. But when the label heard the demo they said you can’t put this away. It was out of control before I could stop it!”

“It annoys me the fact that some people think that that’s the only song… when I think we have much bigger tunes as well. There were actually much bigger songs on radio as well, but people just don’t realise that. Y’know, songs like Just the Right Feeling and Forget about Tomorrow, High… I don’t mind the song, it ticks a certain box, just as a writer I’ve got some songs that mean more to me and I think are better songs… I think every band has a few songs that aren’t necessarily their favourites – they’re often their biggest hits – but if we hadn’t had those hits then I may not be taking to you now. It’s all part of our evolution as a band, and every band has a pop song, and we’ve had a couple of pop songs along the way that have helped us to get to the next record and I’d say Buck Rodgers and Just a Day are probably good examples of that”.

Yet although these hits have endured, the music industry has revolutionised around the band. Grant has mixed feelings on the change from a system based on physical sales to streaming.

“It’s good in some ways for us. We didn’t get involved with Spotify until quite late, well a few years back, because the head of our old label, Echo, was very anti-streaming… but I think we’re at a point now in this industry where radio is sort of important, but I would say streaming’s even bigger now. My kids don’t really listen to the radio, they just stream stuff. It’s a huge way of discovering artists both old and new… we’re a really good band to do streaming because we can put stuff on there all the time and that’s really a good reason why we’re getting some new people coming to our shows, and possibly some younger people as well. … it’s a slightly different world now”.

“I mean CDs, how long have they been going now? They could be completely deleted soon, I’m not sure how long that format’s going to last, which is a shame. But obviously vinyls are doing quite well, we nearly sold out of all our vinyl, I think that’s become quite a flexible thing now. It’s weird because we’ve been talking about Buck Rodgers and that song sounds a bit out of date now, a bit retro, because it’s got a CD player in it, and most cars haven’t even got a CD player any more. It’s a whole different world. Obviously I would rather people be buying the physical side of things but if they’re discovering us or downloading us or whatever it’s fine, it’s just the way of the world. No use fighting it, you just have to embrace it”.

Yet despite its music having roots in areas across the globe, the band has fond memories of Oxford. Their gig at Oxford O2 on 4th November promises to have the characteristic energy and vibrancy of every Feeder gig, but in a more intimate setting than some of the dates on the tour. In fact it’s one of the smallest capacities, and Grant describes it as “really vibey” – and remembers fondly the mosh pits of their stop a couple of years ago. When it comes to the music itself, the band aims to play a combination of older hits (including maybe the oft mentioned Buck Rodgers) as well as a decent chunk of their newest album. Overall, it’s definitely one to look forward to – and I’ll certainly be there.