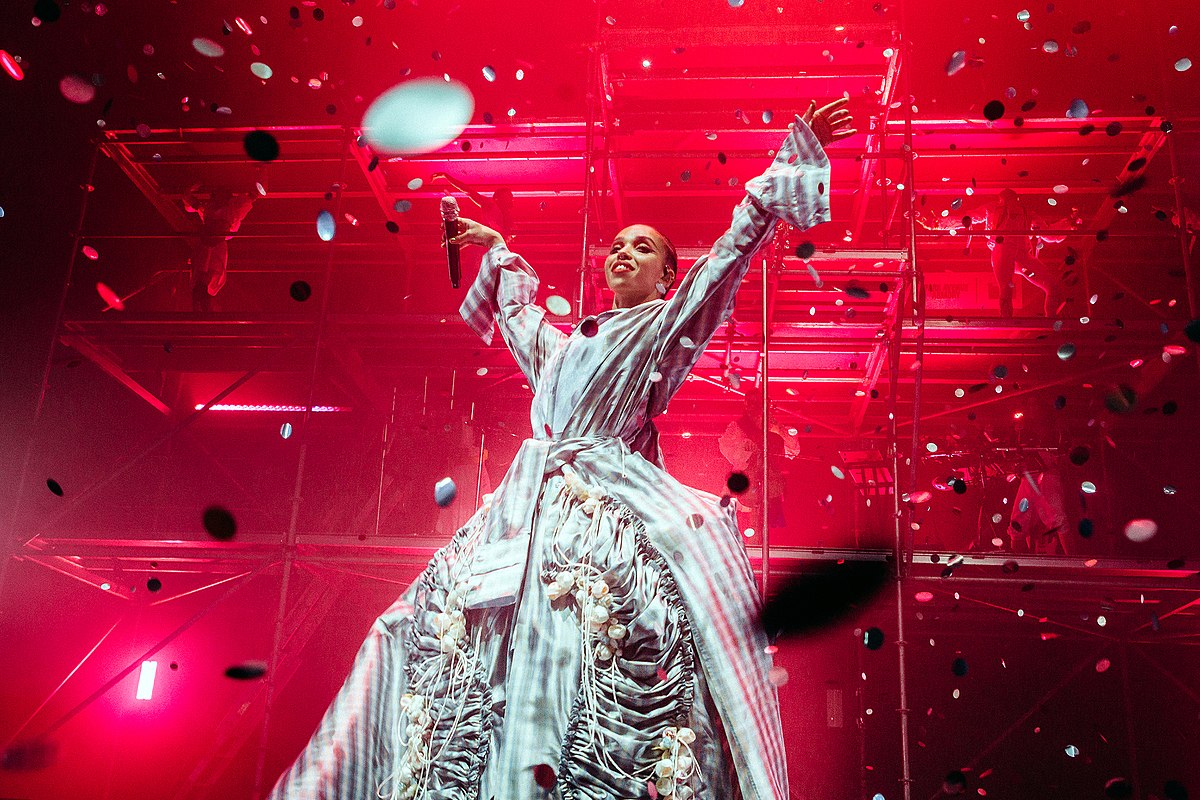 Five years since her first album, FKA twigs is back with MAGDALENE, a unique emotional exploration of heartbreak, depression, and modern femininity. To tackle these potentially played out themes, however, twigs combines her ultra-modern glitchy electronic production and incredibly versatile voice with inspiration from two thousand years ago: Mary Magdalene, one of Christ’s closest followers who has been viewed through history as a sinful prostitute and whose story has only recently been reclaimed. Twigs uses Magdalene as a representation of positive femininity, and of the patriarchal narratives that have been imposed on her own art and life.

The record begins with ‘thousand eyes’, which sounds like an impressive vocal warm-up or Gregorian chant, in which twigs expresses fear over leaving a relationship and the public scrutiny she faces: ‘If you don’t pull me back it wakes a thousand eyes.’ This is reminiscent of the first song, ‘Preface’, from her debut album LP1 all those years ago, which opens with similar choral layering and themes of insecurity and failing romance. But this first song is where the comparisons between the two records start and end: while no-one would call her first album tame or guarded, with MAGDALENE twigs forges new ground by expanding her instrumental range, and more importantly by fully exposing her vulnerabilities and finding astonishing strength in expressing them.

I was lucky enough to see twigs moved to tears at a concert in May: alone on stage, dressed in colourful Renaissance fabrics, crying intensely while singing some of the new songs from MAGDALENE. Twigs said (in an interview with Beats 1’s Zane Lowe) that for her, “the saddest part of the album is the bridge on ‘sad day’”, an atmospheric song about the risks and foolishness inherent in love. A music video is in the works, but for now ‘sad day’ has been released with the image of twigs half obscured in a doorway, possibly in the act of backing out of a relationship but unable to take her eyes off what she’s leaving behind. I tend to be even more moved by ‘mirrored heart’, in which twigs laments over sparse and sometimes softly discordant production, that successful couples who find symmetry and reciprocation ‘just remind me I’m without you.’ After this tragic tone the album moves straight onto ‘daybed’, in which twigs describes her experience of depression through a series of poetic juxtapositions: ‘Vacant are my nightmares/rest becomes my nowhere.’ None of the album’s song titles are capitalised, incidentally – in keeping with the intimacy in the tone and lyrics of all the songs.

Despite the pain and sorrow present on the album, twigs manages to convey great strength and resilience. At times on the album strength is created sonically: for example through the shouted verses and crowded, frantic production of ‘fallen alien’, an aggressive message to a lying lover. Sometimes, however, this strength is manifested physically: for the music videos and tour performances accompanying MAGDALENE, twigs trained like an athlete and learnt brilliant, gravity-defying pole-dancing tricks along with the graceful art of wushu sword-fighting. Her dancing and training routine was hardly affected last year, when she unfortunately had to undergo invasive surgery for fibroid tumours. Although this struggle played a large part in the background of the record, twigs expresses her own resilience with humility. It is only addressed obliquely in the slow staccato recitation, almost rap-like, of the intro to ‘home with you’: “Apples, cherries, pain/ breathe in, breathe out, pain/ no, no novocaine/ still maintain my grace”. (Apples and cherries refer to the size of the tumours, which created, as twigs wrote in an Instagram post detailing the surgery, ‘a fruit bowl of pain’.)

The strongest sense of the album’s overall message is found on the titular ‘mary magdalene’. Here twigs puts forward her feminist vision for a woman’s role: ‘A woman’s prerogative/ A woman’s time to embrace, she must put herself first.’ This is supported by the image of Mary Magdalene, in whose story twigs finds ‘a lot of dignity, a lot of grace, a lot of inspiration’ (words from an interview with i-D magazine). She fights against subservience, and asserts Mary Magdalene’s role not as an object of, but herself a ‘creature of desire’. But twigs’ vision of female empowerment isn’t completely clear-cut, and leaves room for a lot of nuance, of course. One of the ongoing gender roles twigs finds fault with is the expectation for women to be nurturing and caring: she tells Zane Lowe, ‘maybe that is unfortunately still part of being a woman, that free emotional labour that we put into all of our relationships.’ But in ‘home with you’, she manages to find incredible beauty in this role; she is depicted all in white in a gorgeous music video running through fields to the words, ‘I didn’t know that you were lonely/ If you’d have just told me I’d be home with you.’

Any questions about the role of men in the world twigs has created are answered by ‘holy terrain’, the most accessible song on the album, with its trap-inspired beat and Future feature (and two huge producers, Skrillex and Jack Antonoff also enlisted). Probably the least interesting song on the record sonically, it seems a little out of place among the emotion and experimental approach of the rest of the songs. But it does serve as an enjoyable break from the album’s intensity, and is still pretty lyrically dense. Twigs explains that she’s looking for ‘a man who can follow his heart/ not get bound by his boys and his chains.’ And, lucky enough to score not just the album’s only feature, but twigs’ first ever, this isn’t just the Future of a few years back rapping incoherently in a druggy haze; this is the melancholic, self-aware Future of this year’s ‘SAVE ME’. He sounds genuinely apologetic rapping lines like ‘I feed you poison forever my lady’ and ‘Pray for my sins, make me stronger where I’m weak.’

When all is said and done, I think my favourite song on the record will always be ‘cellophane’, the first single back after a long break, now given new meaning as the album’s closer. The song proves that, despite her unquestionable strength as a producer, twigs’ voice can carry a track perfectly with as little backing as possible – mostly just piano chords. And while it served as a gorgeous introduction to this new phase of twigs’ music when it was released in April, now its lyrics sum up the emotions and insecurities of the whole album, and of her past relationship(s?). She conveys the way a breakup can confuse time by meshing together different tenses in the central, tragically unanswered, questions: ‘Didn’t I do it for you? Why don’t I do it for you? Why won’t you do it for me, when all I do is for you?’ And she finishes the record the way she started it, in fear of the invasive public scrutiny she faces: ‘They’re watching us, they’re hating.’ Perhaps the song’s repeated questions are partially directed at her audience, and the unattainable expectations and judgement imposed on her? On the bright side, the album’s vulnerability is one of its greatest strengths, and it is clear that the sadness which permeates through it is met with twigs’ impressive defiance and resilience. The album is successful, personal, and unique, and represents twigs’ growth as an artist (and in general). In my opinion, one of FKA twigs’ most poetic lines isn’t actually a lyric, but a throwaway comment in her interview with Zane Lowe: to her, MAGDALENE is about ‘finding my voice without society’s whispers’.

Songs for the Sadgirl