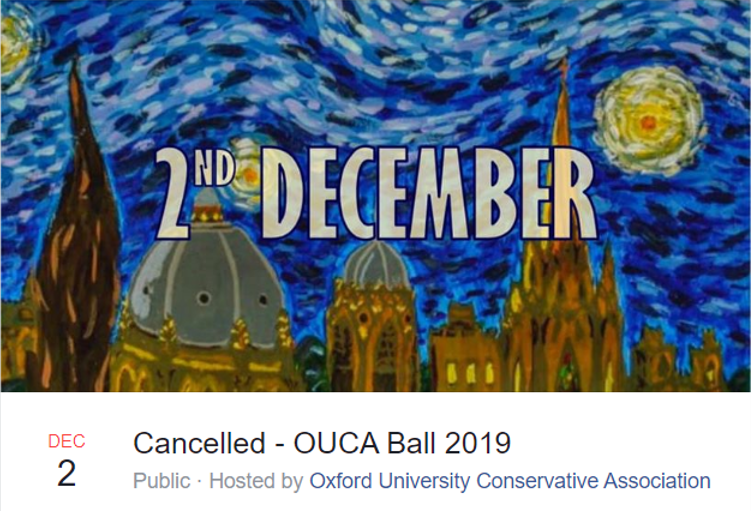 The Oxford University Conservative Association has lost £4100 due to the cancellation of its Michaelmas ball.

Scheduled for the 2nd December at the Malmaison Hotel, the ball sold only 30-40 tickets, Cherwell understands.

A senior OUCA source, who wishes to remain anonymous, told Cherwell: “This [MT19] term’s President has lost the association £4100 on a ball which was cancelled because not enough tickets had been sold – that’s £1300 on a venue and £2800 on a band.

“While planning an event which failed to take off is understandable, the bad part is the negligence he showed by not reading the contract with the band – he finally agreed three weeks before the event that we should cancel this very expensive band, but then discovered that the contract he had agreed to said that after four weeks before the event it wasn’t possible to cancel without paying the full fee.

“When asked how much the association had lost this term in a council meeting the President said ‘that’s immaterial’.”

Michaelmas term President Toby Morrison offered the following comment on the cancellation: “Unfortunately, the OUCA senior committee decided after much deliberation that we had to cancel the OUCA Ball 2019: Starry Night.

“This, as ever, was due to a plethora of factors. Issues with catering at the Town Hall, meant that it was no longer a viable option. We attempted to move to Malmaison, however, we were not happy with the earlier end time and lack of space for the band. Therefore, we decided the best course of action was to cancel the event.

“We are currently in the process of offering all those who bought tickets a full refund, and they have our most sincere apologies that the event is not going ahead.”

Previous financial trouble saw OUCA lose its university affiliated status in 2009, when an unpaid debt, incurred at a charity event at the Cavalry and Guards Club on Pall Mall, led to the University disaffiliating from the association.

Founded in 1924, OUCA has been home to Oxford Conservatism through thick and thin, aided by notable patronage. The Honorary President of the association is MP Jacob Rees-Mogg, and its patron, former Prime Minister Sir John Major.

Former Presidents of the association include Dominic Grieve, Jeremy Hunt and Margaret Thatcher.