‘Uncomfortable Oxford’, a project encouraging awareness of Oxford’s ‘legacies of inequality and imperialism’, has experienced rapid growth since its creation in 2018.

Almost 3000 people attended events over the past year, according to their 2019 Impact Report. These include tours, lectures, and workshops.

The organisation has run over 159 walking tours, reaching people from over 31 different countries. These tours are led by students and “encourage analysis and discussion about uncomfortable subjects within the city”.

The most popular event has been ‘The Original Uncomfortable Tour’, with 1260 people attending in 2019. Further walking tours include the ‘Uncomfortable Literature Tour’, the ‘Oxford and Empire Tour’, and the ‘Follow the Money Tour’.

These figures are reflected in the large quantity of positive feedback, with the walking tours averaging 5 stars on TripAdvisor. Visitors commend the knowledge of guides, the global outlook, and the barriers broken down to spark discussion.

The Impact Record also records how awareness has increased through collaborations, events, and publications. Co-directors Olivia and Paula published ‘The Maps We Inhabit: Storytelling, Memory and Uncomfortable Oxford’ in online journal Living Maps Review and were interviewed on the ‘Naked Humanities’ and ‘For Art’s Sake’ podcasts.

‘Uncomfortable Oxford’ started a series of talks about the British Empire, the PUBlic lectures. They also attended the Being Human festival, co-hosting a ‘Death Café’ style-event to encourage reflection on how “stories of historical deaths are used socially and politically”, and ran an Activism Café at the East Oxford Community Centre.

Two DPhil students in the Department of History, Olivia Durand and Paula Larsson, founded the project in 2018. It aims to “‘raise awareness and create discourse’ about the ’uncomfortable’ legacies of inequality and imperialism in the city and the university’”. The 2019 newsletter describes how this involves colonisation and imperialism, race and racism, gender and women’s history, LGBTQ+ history, slavery, violence, and wealth and financial ethics.

2020 will see a continuation of the PUBlic Lecture Series, the creation of ‘The Uncomfortable Oxford Podcast’, and collaboration with ‘The Whip’, a new play by the Royal Shakespeare Company.

The Unscheduled Life of a History Student 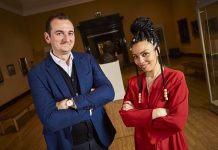