There was high expectation placed in American Dirt, what with Oprah Winfrey evangelising on Apple TV and a flood of celebrity endorsements on Twitter and television. The aggressive marketing campaign didn’t even peak with the many pictures and appraisals from prominent Latinx actresses and minor authors. It went further, with claims of it being “The One”, and comparisons to Steinbeck’s The Grapes of Wrath. Sandra Cisernos even seems to think it “not simply the great American novel, it is the great novel of las Americas”.

This “great American novel” follows Lydia and her son on the run from a vengeful drug cartel, on their journey towards safety. Her quiet suburban life as a bookseller unravels when she unwittingly befriends the leader of the improbably named drug cartel los jardineros (the gardeners). Without knowing who he is, she befriends him, reads his poetry (it gets worse), until her journalist husband uncovers who her new friend really is. When his exposé piece results in the suicide of the boss’s daughter, retaliation comes in the form of the massacre of Lydia’s family at a quinceañera. What follows is an attempt to humanise the emigration process, but it reads instead as a bland pastiche of stereotypes and a drama better off in a telenovela.

The dialogue and pacing is quite terse and quick, as befits a thriller. What weighs it down, and has provoked the anger of most reviewers, is the needless inclusion of what has been termed “google-translated Spanish” into every bit of the novel. Sentences are absurdly long, for example: ‘manned by gangs of narcotraficantes, or soldiers who may also be narcotraficantes, and policemen who may also be in league with narcotraficantes’, and the novel is interspersed with needless chunks of dialogue in which characters address each other in untranslated Spanish for one part of the conversation and then continue in English. And then the odd Spanish word, dotted around pages of English speech, ‘my sweet son, so intelligent, so guapo’. This may have been a bid to lend the novel more authenticity, but instead it contributes to the many stereotypical elements that pervade the book.

The characterisation is similarly flat, with the novel populated by a series of one-dimensional characters. A degree of ventriloquism is inevitable in thrillers – one need only think of the thinly concealed propaganda of Tom Clancy’s Jack Ryan books or the law-and-order police dramas manufactured by Patterson. Far from the searing character portraits of Tom Joad and Jim Casy that give the tragedy of the Grapes of Wrath its depth, American Dirt offers only thin stereotypes. In this case, the Catholic priest harbouring immigrants, the rapist narco, twin sisters on the run from domestic violence, and further stock characters that make up the “Mexican” in the American popular imagination. Even the ridiculousness of “La Lechuza/ The Owl”, the bloodthirsty, creepy poetry-writing leader of the cartel is far from the worst example of this. The missed opportunity here is to give an identity to the sheer number of people who cross the border and carve out a life in a hostile America, or have died trying. Far from refuting Trump’s rhetoric of hate, the novel perpetuates stereotypes, such as that of Mexico standing in for the whole of Latin America. The entire continent is yet again presented in the binary of violence and drug cartels.

The improbable, if sometimes blithe plot is another victim here. One of the few good things about the book is an attempt to lay out the geography of the route to the US, especially the “train of death”, “La Bestia”, the infamous cargo train perched on by migrants to get to the border. It gets worse from there. Cummins manages to reduce what would otherwise be a terrifying and profound journey to a series of cliff-hangers and monotonous flash-backs worthy of the crappiest of Netflix series, with lines such as: ‘without a thought in her head except Luca, she jumped.’

Despite the best efforts of magazine and newspaper owners to censor them, a raft of critical reviews, spearheaded by prominent chicana author Myriam Gurba have protested against many aspects of the book. Over 120 writers, including Mexico’s leading novelist Valeria Luiselli called on Oprah’s book club (the gatekeeper to ‘making it’) to boycott the novel. Accusations of racism, cultural appropriation have flown around. Targeted first against the claims of ‘representation’ and an authentic account of the immigrant experience, to the poor quality of the writing. Cummins’s publishers have had to cancel a nationwide book-tour citing threats of violence. The problems seem to stem from whether Cummins, a self-identifying white woman with Puerto Rican roots, has the right to tell the story of America’s Latin American migrants, as well as the quality of the book, and accusations of making profit from other people’s suffering. This is not helped by the fact of the hefty seven-figure publishing advance, or the inevitable schmaltzy Hollywood movie. Or even the ‘border-themed’ launch party, with decorations of barbed wire and flowers.

The reaction surrounding this book is yet another symbol in a longstanding culture war. At best it can be described as a marketing bid gone wrong, a cack-handed approach to wanting to initiate a public discussion. Again, publishers knew better than Latinx writers as to the Latin-American experience and identity and any of their criticisms have been silenced. The ‘controversy’ includes the usual amount of celebrities hand-wringing, giving and withdrawing endorsements and punditry that seems to be the staple of American cultural life. What began as an over-ambitiously marketed thriller has degenerated into a perfect example of muzzling minorities and white-saviourism.

The role of fiction to criticise and hold a mirror to society is a tradition in which all the great and minor novelists have taken part. And in a nation such as America, with a politics and society ranging from hypocritical to sheer tragedy, biting social critique is all the more urgent. Cummins does this in her own minor way. The impact this will have on shaping the view of Latin American immigrants for good or for ill will be there, and there are good intentions behind it. What crosses the line is the blatant attempt at money-making, the artificial engineering of ‘a classic’, and the reality that Latinx authors who do write these stories just don’t get the same platform. It seems that American corporate capitalism can reduce any spirit or principle to the calculus of profit. 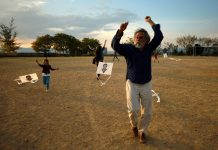 Bolton may be gone, but it is the President who has the most dangerous foreign policy

We need to talk about Trump: the politicisation of Late-Night Comedy