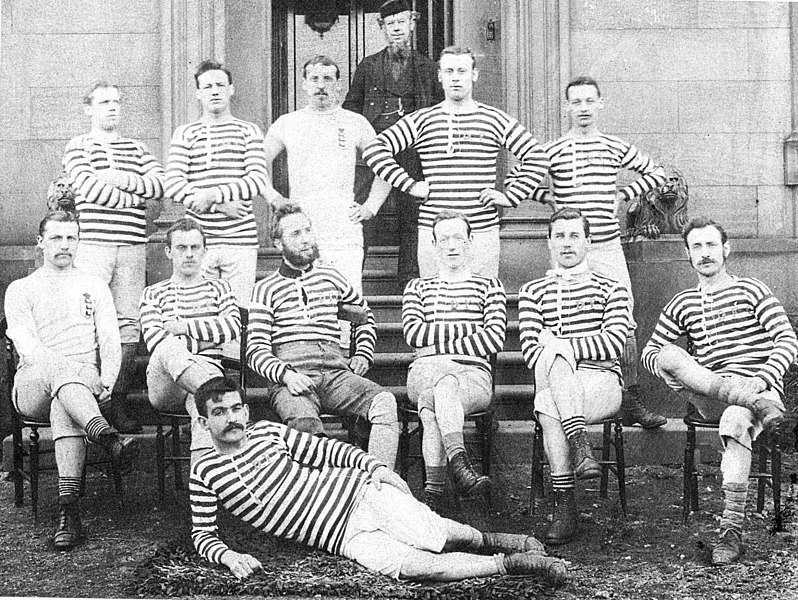 Despite what social media analytics might suggest, Tiger King was not the only Netflix Original series released last month. The English Game, created and directed by Downton Abbey’s Julian Fellowes and with a conspicuous lack of big cats, was released on the same day but has been wholly and understandably overshadowed in its pursuit of viral success.

The British period drama, which focuses on the development of football in 19th century Britain, follows a number of characters on both sides of the amateurism vs. professionalism debate which emerged in many sports in the 19th and early 20th centuries. It very roughly follows true events, as it sees Fergus ‘Fergie’ Suter, and his friend and fellow footballer Jimmy Love, move from their Scottish club, Partick, to the Lancashire team Darwen, becoming some of the first professional football players. The pair, alongside their boss, hope to help the mill-based team become the first working class team to win the Football Association Cup, hitherto dominated by gentlemen. These gentlemen are – quelle surprise – not particularly pleased with this challenge and feel threatened by the professionalisation of ‘their’ game, thus moving to ban the participation of players who are paid to play.

The series isn’t bad. It’s certainly enjoyable, but it promises so much more than it delivers. Its constituent parts appear to provide a recipe for inevitable success, with its award-winning director, cast of familiar faces, fascinating social, cultural, and political historical backdrop and, above all, a central theme focusing on the development of the greatest game ever played – football. Perhaps, however, this privileged starting position was the cause of its deficiencies. The English Game has all the hallmarks of a project designed to capitalise on the reputation of the director, profiting from his oft-trotted, though admittedly popular, Posh ‘n’ Not theme.

The cast all put in good, solid performances, but they’re hamstrung by average writing, which necessitates their characters erring on the verge of becoming parodies of themselves. Fellows does not delve into the complex lives of the working classes in the small Lancashire town in which the series is largely set, or indeed the lives of the Old Etonians with which they’re unsubtly contrasted, but rather falls back on unimaginative, painting-by-numbers-style period drama clichés. From the outset, we are confronted with the arrogant toffs who are entitled snobs, complete with the charming young son who can never live up to his father’s expectations, and with the hard-working, salt of the earth northern mill workers, variously presented as happy-go-lucky or angry. There is a little more depth of character afforded to Kinaird and Suter, with the former suddenly abandoning his long-term and institutionally-bred arrogance in order to become the champion of the working class football movement and the latter battling between the pull of his heart and pocket. But again, they exist within such a cliched plot that character development can be predicted at every turn, and much of the nuance is lost.

Historically, The English Game is less than impressive. Much of the real history is simplified for the sake of the plot, and the chronology is a little askew in various, unimportant aspects, but almost all of these misdemeanours can be forgiven. This is not a documentary, after all, and the plot isn’t obviously undermined by the ways in which the production fails to represent the historical reality faithfully. Visually, the series is pleasing, and there are satisfying nods to the tactical development of the game, alongside representations of the incredibly physical nature of the 19th century game, which often saw the practice of ‘hacking’ employed as a tactical decision. Again, whilst the treatment of upper-class women is largely reduced to gossiping and following their husbands to and from the dinner table, the series does present Kinaird’s wife, Alma, as an influential character in Arthur’s life, and alludes to the social activism with which many upper-class women were concerned during the period.

Despite the criticism which has been fairly levelled at the series, the overall viewing experience is good enough. I wasn’t left overwhelmed at the spectacle I’d seen, desperate to watch it again; nor was I scrambling to tell my friends to watch it. Despite the sometimes-painful stereotypes, historical flaws and clichéd subplots, The English Game does provide 270 minutes of useful ‘bingeable’ Netflix fodder that is particularly welcome during this period of football-free isolation.