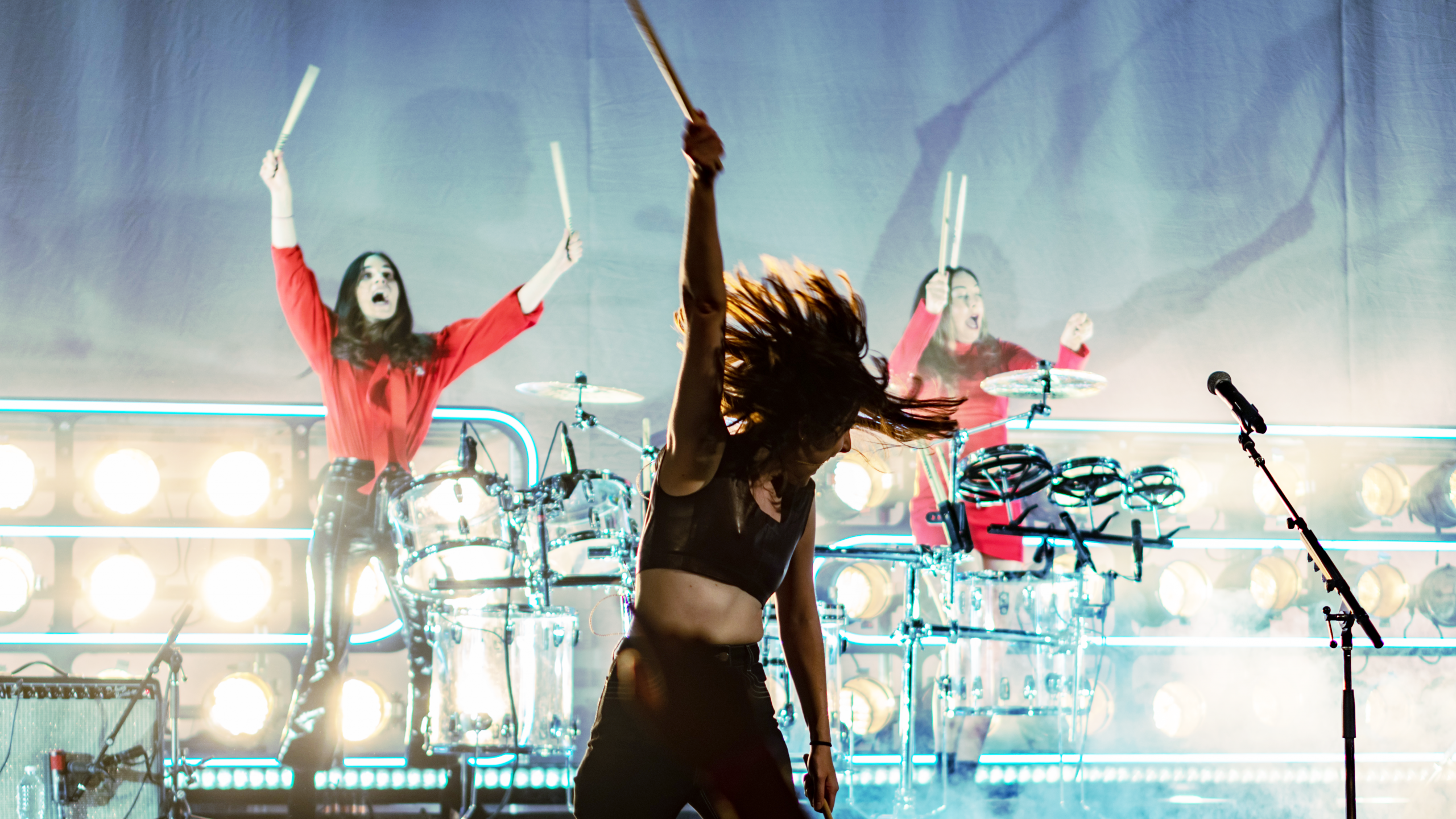 As with other albums scheduled for 2020, the release date for Women in Music Pt. III experienced an upheaval. Having moved from its original April date to late summer, before being brought forward again to the end of June, its ultimate release date was “just in time for summer”, the band noted. It almost seems strange to think that this wasn’t the original plan. If there’s any season with which Haim (and this album) would be associated, it would be summer – the three Haim sisters have been the embodiment of sun-kissed Los Angeles and its breezy, cool girl aesthetic in both style and sound since their 2013 debut Days Are Gone. However, this glossy Californian veneer appears peeled back for the first time on Women in Music Pt. III.

“We named our album that because we didn’t want to get asked any dumb questions,” frontwoman Danielle told The Independent. This suitably exemplifies the new degree of directness and openness that Haim embrace on their third LP, as they consider loneliness, weariness, and depression in their lyrics. The sisters have been open about their personal struggles in the last few years: Danielle found herself dealing with depression; Alana was grieving the death of her best friend; Este was having difficulties with her type 1 diabetes. These themes are given worthy attention, while Haim simultaneously build upon their 70s Californian rock foundations in compelling ways.

The opening track of Women in Music Pt. III, ‘Los Angeles’, begins with a brief cacophony of saxophone, already suggestive of the novel directions Haim have chosen to explore on this album. It’s an airy song with a somewhat Caribbean twist, which almost masks the inherent sadness in the words: “These days I can’t win / These days I can’t see no visions / I’m breaking, losing faith”, Danielle sings about falling out of love with her home.

While unhappiness is an undertone in ‘Los Angeles’, it comes to the forefront as the record progresses. ‘I Know Alone’, a deceptively catchy electropop track, laments the endless passing of time and feeling detached from the world; ‘I’ve Been Down’ is an acknowledgement of melancholia and the need for help, as Danielle almost speaks the verses; ‘Now I’m in It’, initially released last summer as a taste of things to come and now offered here as a bonus track, details life in the midst of depression. Songs like these, with their penetrating lyrics, are representative of Haim’s growth with this album.

The most pointed reference to the album title is ‘Man from the Magazine’, a quietly scathing acoustic song that recounts the band’s experiences with sexism in music and their refusal to let it go (“I don’t want to hear / It is what it is / It was what it was”). Its biting last line rounds off what is a definite highlight of the album.

Haim’s sonic exploration and forays into other musical styles to augment their pop rock roots are also laudable. The saxophone is a welcome, unwavering presence from its first appearance in opener ‘Los Angeles’, to the tenth track ‘I’ve Been Down’, and the final track ‘Summer Girl’. ‘Another Try’ is an easy-going, reggae-tinged affair, littered with precise details that keep it sharp. A distorted scream underlies ‘All That Ever Mattered’, but its true defining feature is the searing guitar that kicks in during the bridge. Haim engage in more theatrics than ever with the lively rock song ‘Up From a Dream’, opening with a dramatic yawn and ending with blaring alarms, while the R&B-infused ‘3AM’ begins with a voicemail parody of a booty call. Flourishes like these could seem kitschy in some circumstances, but in Haim’s well-crafted ambience they make entertaining additions to the tracks’ textures.

While there are no real missteps or disappointments on the album, there are a handful of songs that don’t quite live up to the heights of the others. ‘The Steps’, ‘Gasoline’, and ‘Don’t Wanna’, while solid, are more conventional Haim tracks that perhaps would not seem out of place on their 2017 outing Something to Tell You. This is by no means a slight, but rather an indicator of how well Haim’s more daring ventures on Women in Music Pt. III have paid off.

Women in Music Pt. III expertly walks the balance of encompassing a wide range of sounds, while still coming together to form a cohesive album overall. This is the most interesting and personal album that Haim have released to date, and this development is truly welcome.