The Punjabi Farmers Standing up for India’s Democracy

Ciara Garcha discusses the salience of the ongoing Indian farmer strikes and their impact around the globe. 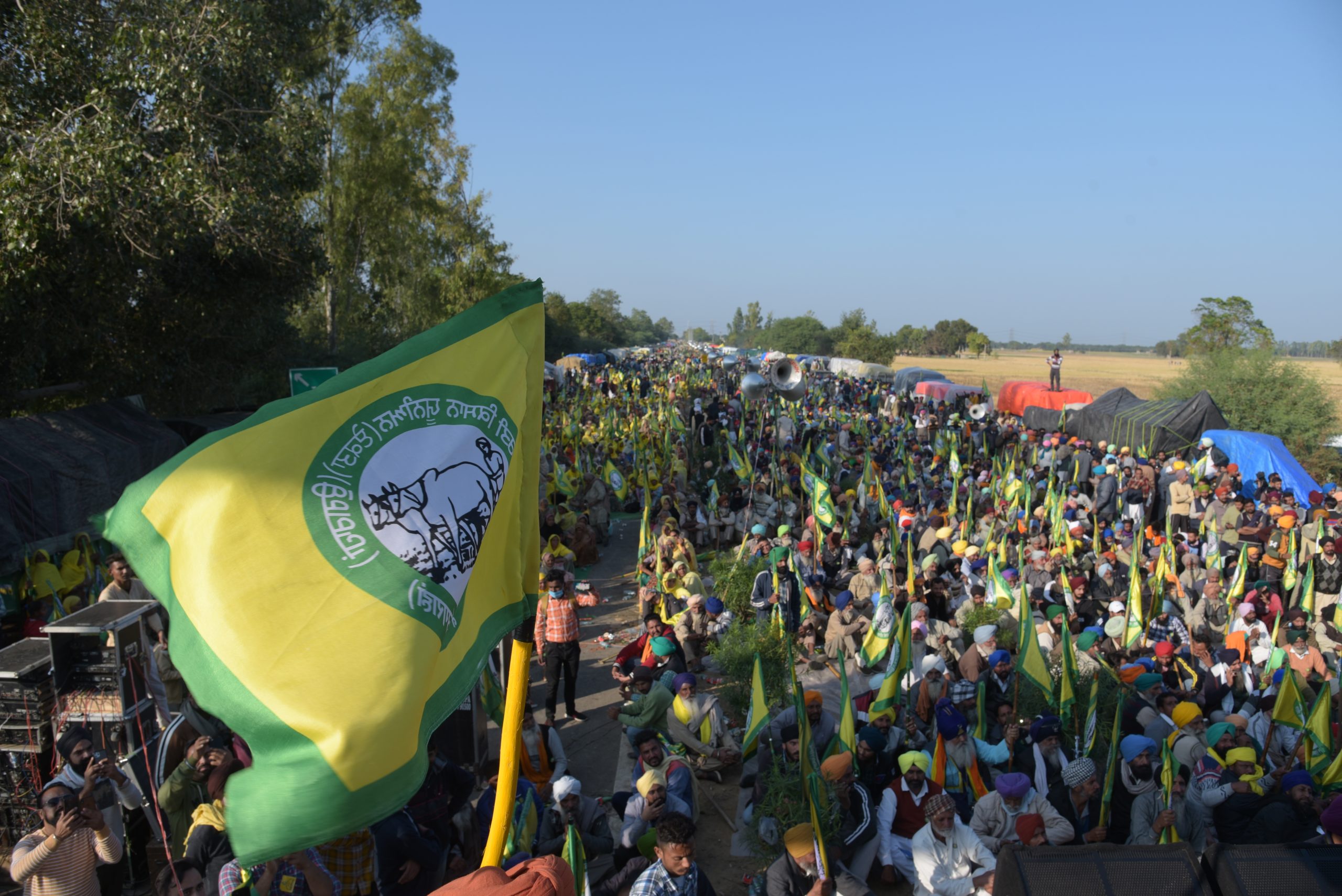 Photographs of the ongoing Indian farmer strikes have trickled through to social media feeds across the world, in stark contrast with the relative silence of European media. Whilst many in the UK and Europe remain unaware of events in India, they amount to a bold attempt to secure the future of the world’s largest democracy.

The farmers that first flooded onto the streets of India a few months ago, trekking the over 230 miles from Punjab to Delhi, were raising their voices against rash reforms passed by Prime Minister Narendra Modi’s right-wing Bharatiya Janata Party (BJP) government. The new legislation opens the sector up to exploitation and manipulation by private corporations, removing safeguards for farmers and largely deregulating the industry. But with around three quarters of the Punjabi population being employed in agriculture and the sector making up around 25% of the state’s economy, the new reforms represent an attack on Punjab and the Punjabi people.

Punjab, “the bread basket of India,” is home to mostly small and medium-scale farmers, with 85% of India’s farmers owning less than five acres of land. Thus, the preference and support given to large corporations by the new legislation has pitted the small-scale farmers of Punjab against powerful businesses, many with close links to Modi and his government.

The protests have come to represent something more than just a struggle against a piece of farming legislation, but a struggle for India’s future. The reforms and the outcry in response to them must be viewed in the context of Modi’s six years as Prime Minister and the agenda he and his BJP party have pursued. As a proponent of Hindutva—the ideology of Hindu-Indian nationalism—many of Modi and the BJP’s policies fly in the face of the secularism that India was founded upon when it achieved independence in 1947.

The 2019 Citizenship Amendment Bill is a recent example of this nationalist agenda, which sparked controversy and anger within India and across the world. The bill removed the right of Muslim refugees from certain neighbouring countries to claim Indian citizenship, an explicit expression of the BJP’s narrow view of what it means to be Indian, which was brought into the political mainstream with Modi’s rise and election as prime minister in 2014. Protests against his Citizenship Amendment Bill were met with brutal state repression, as well as paramilitary violence. Similarly, peaceful protesters demonstrating against the farming laws have been met with tear gas, water cannons, rubber bullets and batons. As images emerge of protesters feeling the wrath of a storm of rubber bullets, or an elderly Sikh man cowering as a paramilitary member swings a baton over his head, India’s claim to being the world’s largest democracy seems increasingly dubious.

It is not difficult to see how the changes in agricultural law are an extension of the Hindutva agenda. As the farming sector is home to approximately 16 million Sikhs, making up nearly 60% of the state’s population and much of the agricultural workforce, the farming bill appears to disproportionately target India’s Sikh population. Punjab is a vast, diverse state and the continuing strikes have been assembled of farmers and allies of all faiths and backgrounds, united and standing in solidarity. However, it is not unreasonable to think that an attack on the home of India’s largest Sikh population was motivated partially by narrow, discriminatory ideas of Indian nationalism. Yet, in standing together—Sikhs, Muslims and Hindus amongst others—and journeying through the streets of India, Punjabi farmers are not just resisting unfair legal reforms. They are fighting for India’s proudly multi-faith, secular and democratic character.

As one of the states divided by the outgoing British colonial administration in 1947, Punjab has had a difficult history relating to religion. But these protests have showed a positive view of the diversity within Punjab and India itself, flying in the face of the BJP’s Hindu-focused ideas. Images of Muslim protesters serving the traditional Sikh meal, langar, to their compatriots, or of farmers of all faiths standing guard whilst Muslim demonstrators pray, show the significance of these protests. For an India which is having its secular commitment tested by the BJP’s agenda, scenes of solidarity emerging from the ongoing farming strikes inspire hope that an inclusive, diverse, positive future is still possible for India.

The strikes have also inspired movements beyond India. British Punjabis and diaspora groups across the world have stood in solidarity in a range of places including Leicester, San Francisco, London and Toronto. As home to over 700,000 Punjabis, the largest ethnicity amongst British Asians, the UK has seen several demonstrations in support of the striking farmers and in solidarity with those facing repression in India. In Leicester and London, car rallies were held, bringing traffic to a standstill in the capital as demonstrators assembled outside the High Commission of India. British Sikhs in particular have been at the forefront of the demonstrations in the UK, as 92% of Sikhs in the UK have ties to agricultural land in India. For many Sikhs within India and around the world, agriculture is intertwined with their heritage and an attack on independent Punjabi farmers has, to many, translated as an attack on Sikh culture and identity. The global Punjabi population is therefore playing a part in resisting an attack on such a fundamental part of Punjabi culture.

The events playing out in India, coupled with the global outcry, have, however, failed to capture the attention of many sections of western media and politics. Indeed, even Prime Minister Boris Johnson—the head of government in a country with one of the largest Punjabi communities in the world—seemed completely unaware of the ongoing strikes. When quizzed about the state’s brutal treatment of protesting farmers by Labour MP Tan Dhesi, Britain’s first turbaned Sikh MP, Johnson responded that he had “serious concerns about what is happening between India and Pakistan”, but that they were “matters for those two governments to settle.” Johnson’s apparent and complete ignorance of events in India is both shocking and alarming.

Even as British Indians take to the streets to stand in solidarity with the striking farmers, the Prime Minister, eyeing a post-Brexit trade deal with India, remains ignorant or otherwise disinterested in the crisis. In accepting an invitation to meet with Modi in January despite his discriminatory agenda and the current turbulent backdrop, Johnson seems to be tacitly accepting events in India instead of raising his voice in opposition. Of course, the relationship between Britain and India has been a historically brutal one of centuries-long British colonisation and repression. But if India and Britain are to move forwards, the Prime Minister must first educate himself on what is actually happening in India and present democratic opposition reflecting the concerns of the British Indian population when he meets Modi in January.

The global Punjabi diaspora and allies across the world hope for a peaceful future for Punjab and India, but with Modi and the BJP at its helm, this seems doubtful. Some have claimed the number of participants in the ongoing demonstrations is around 250 million—nearly four times the population of the UK—which would make them the largest mass demonstrations in history. And though such an important story has failed to gain the attention of the western public and its leadership, the ongoing protests are of paramount importance to global politics and the international climate.

In boldly standing against the reforms, even as rubber bullets rain down on them or they feel the wrath of the water cannon, the striking farmers are fighting for their livelihood and are standing on the front lines of the very future of India’s democracy. Punjabi-born Canadian poet, Rupi Kaur, summed up what is at stake for Punjab and India: “The ultimatum is clear…democracy or majoritarianism.” As the BJP worryingly pursue their nationalist agenda and crack down on peaceful protests with terrifying force, Indian democracy depends on its people standing up courageously. The Punjabi farmers are fighting for more than just their future and industry, but for the future of their country as they know it.