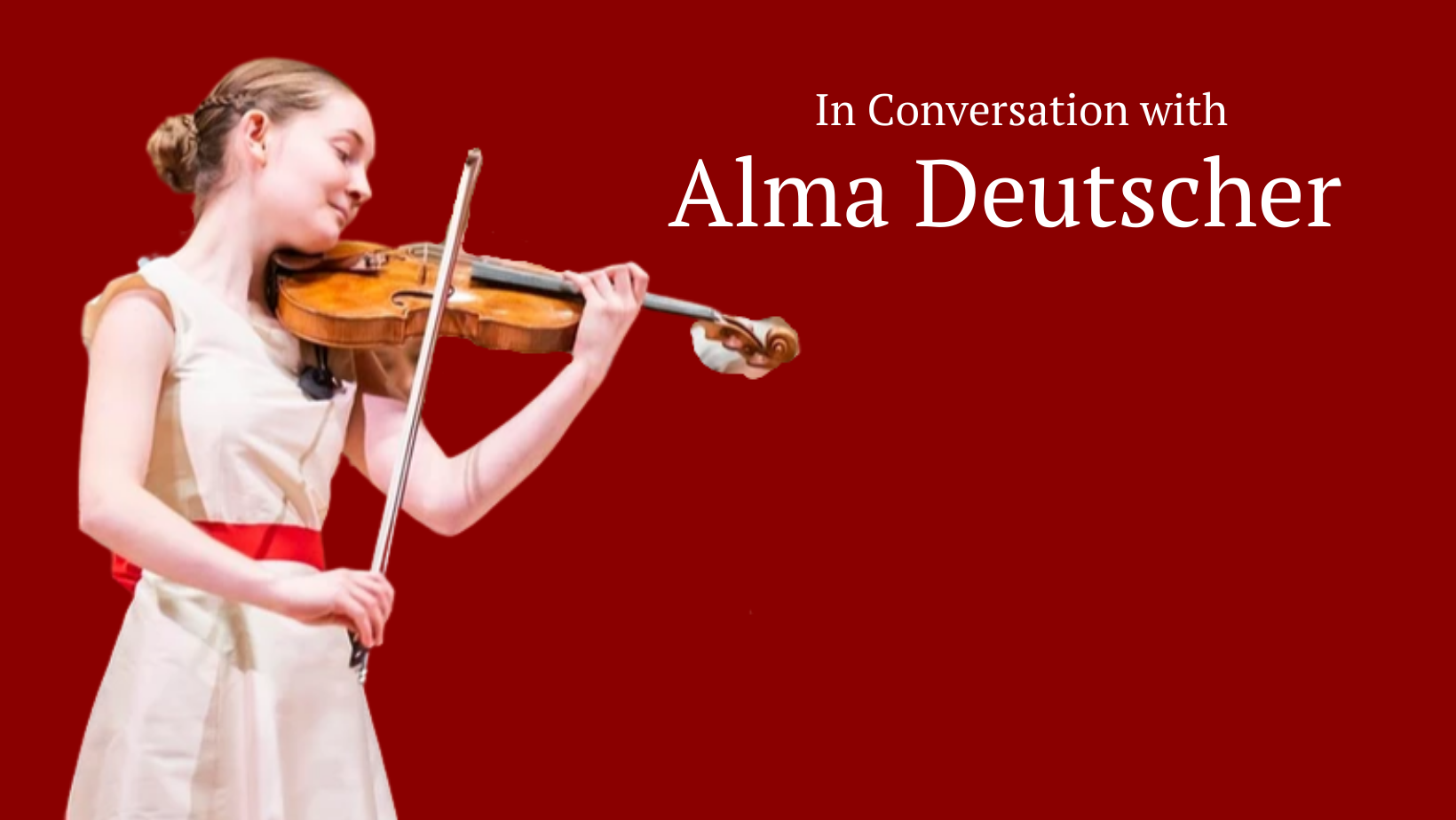 Born in 2005, Alma Deutscher has been composing since the age of four: she is that rare breed known as a child prodigy, touted to mystified television audiences quietly envious that they could never hope to be a prodigy, let alone a few years after having learnt to walk. Few things would see adults jealous of a child, though it is easy to see how Deutscher’s innate musical excellence might be an exception. Born to Cambridge graduates Janie and Guy, a literature professor and linguist, Deutscher’s intellect was nurtured from within the family home, after attending a school orientation day and resigning herself to forever resist the apparent boredom of an ordinary education—she has been home-schooled since. Having learnt the piano aged two and violin the year after, she can thank her musical talent for having saved her from show-and-tell.

Living in Oxford when she was young, some of Deutscher’s earliest musical memories were formed in the city. She would play in her garden with a skipping rope, twirling it around and allowing the melodies to flow forth, before writing them down in her notebook—later providing useful material for her first studio album, titled—straightforwardly—From My Book of Melodies. ‘When you’re a young child, everything is a game. And music was a game for me—a wonderful game. As I grow up, it becomes more serious.’ Countless interviewers have asked Deutscher self-same questions, endeared curiously at the talented little girl… I wonder if all the adult awe became a little dull. Or patronising. But Deutscher is truly remarkable: aged five, she completed her first piano sonata; at seven, she wrote her first short opera; at nine she wrote a concerto for violin and orchestra, and a full-length opera at twelve. Winner of the European Culture Prize (2019), Deutscher is certain to join the musical greats of the coming decades, perhaps familiar of a young Daniel Barenboim (the child prodigy pianist and conductor born in 1942).

I’m curious whether this Basingstoke-born Mozart incarnate wanted to shake the patronage and assert herself as a consequential composer, her age irrelevant to the quality of her music. Has Deutscher’s widening perception of humanity affected the tone and meaning of her compositions? She says it’s too soon to say. ‘Maybe if you ask me in ten years’ time, I’ll have a better answer.’ One must remember she is still just a teenager—she’ll turn sixteen in February. Though listen to her music and your ears might tell you otherwise.

If anything asserts Deutscher’s transition from child to professional composer, it is her Siren Waltz, performed to a sold-out Carnegie Hall in 2019. Deutscher endeavoured to deconstruct the clamorous noises of everyday life, she based the waltz on the sound of the Austrian police sirens she was so struck by when first moving to Vienna; they begin the piece, before orchestrally-recreated car horns and sirens disintegrate and a melody emerges. ‘Most sounds of everyday life are not particularly pleasant or beautiful,’ she says; ‘so it’s certainly not easy to find beauty in them. But it’s worth trying because it’s worth trying to find beauty in everything.’ A mantra perhaps appropriate amidst the sustained devastation of the pandemic into the New Year, I wonder if we all ought to practise Deutscher’s skill of searching-out beauty in ordinariness—though perhaps this might feel a little lacklustre with her orchestral version playing in mind.

Influenced by the newfound stimulation of the city to which she’d recently moved, Deutscher took the ‘police sirens, the beeping of the closing underground doors, car horns’—sounds wearily metropolitan to the rest of us—and ‘tried to transform them into uplifting melodies,’ trying to ‘compose it in a way that the listeners could follow the gradual transformation from ugly into beautiful.’ Deutscher considers that the effects of music are ‘probably much stronger than painting’, and its power to evoke profound emotion is perhaps what explains why so many have turned to music to drown the noise of the past year’s news headlines.

But Deutscher says she is sometimes criticised for the lack of ugliness in her music—as though to seek charm in an often unpleasant world is a naïve romanticisation of modern existence—or for reproducing the chirping tunefulness familiar to the musical canon of past centuries. Her musical aesthetics certainly forefront the importance of melody established in musical history, but she insists that ‘melody is the essence of [all] music – this is not just my own musical aesthetics, it’s the aesthetics of almost everyone, young and old. It’s not a great secret that the most loved pieces of music are the ones with the best tunes.’ Indeed, Deutscher cites her second opera, Cinderella, as containing numerous examples of willingly ‘unpleasant’ passages: ‘they are there to make a specific point—for example to convey a storm of anger and pain […] these short bits of ugliness are only there to highlight the beauty of that comes afterwards.’

I am increasingly compelled by Deutscher’s argument that, if the world is already a tumultuous place (of this fact there is little doubt), then why saturate it with even more tunelessness? ‘I don’t see the point of creating ugliness just for the sake of it,’ she concludes resolutely, ‘It’s the easiest thing in the world to create ugly music. You don’t need inspiration, you don’t need talent, you don’t need hard work […] Why should I torture myself and my audience with more of it?’

I ask Deutscher to list her ‘top three’ composers. Apparently, her younger sister always lists a ‘top three’ of everything. My question now feels somewhat juvenile. ‘There are just too many composers that I like in different ways and at different times. When I listen to music, I try to analyse and learn from the aspects that I like, rather than just rank it as number one or number two-and-a-half.’ In the last year, Desutcher has apparently been studying Richard Strauss (try his Vier Letzte Lieder), whose work she found a particular inspiration when revising and re-orchestrating Cinderella. Speaking of her sister, I feel a sudden sympathy for the younger sibling of someone like Deutscher—parental expectations can be weighty at the best of times. But then, I consider whether she might often feel the pressure of the reputation which preceded her in adolescence. Yet it seems that her musical interest is borne of genuine passion—her parents aren’t the pushy showboat sort, but limit her media appearances and performances so as to encourage opportunities that she finds most enjoyable or conducive. ‘I’m very lucky that, so far, almost all the pieces that I composed were pieces that I really wanted to do. So I don’t think I ever really got stuck in the sense of thinking to myself: I hate this piece, why do I have to do it?’

Deutscher’s 2019 debut at Carnegie Hall received a standing ovation—a compliment considering the tough New York crowds—and was commended by critics. ‘With big projects,’ she admits, ‘usually the challenge is that there is too little time to finish them.’ But the positive reaction of the public emboldens her to boldly experiment with lengthier pieces, which ‘would be difficult to keep up the motivation for’ if reception was not as balmy. Then again, she says that she is ‘sometimes told by people in the classical music establishment that the style of my music is wrong and heretical’—but doesn’t seem dispirited. Indeed, her career is only truly beginning.

A child prodigy though she is, lockdown has affected Deutscher just as it has everyone else. Just instead of cancelling concerts she’d planned to attend, the pandemic cancelled concerts she herself had organised. ‘A new production of my opera Cinderella was supposed to open in Salzburg in December after I had spent months on months last year revising it. We even started rehearsing for it in November.’ She remains fairly positive despite the impact on her work, ambitiously hoping for its opening in January. ‘Compared to most musicians, I’m extremely lucky, because as a composer, I’m not wasting my time. I’ve been working on my next opera, Des Kaisers Neuer Walzer (The Emperor’s New Waltz). It’s a romantic comedy about a rich girl falling in love with a poor boy, combined with musical satire inspired by Andersen’s fairy tale.’ This being her third opera, it has already been commissioned by the Salzburg State Theatre for performance in 2022. ‘If Coronavirus had not left so much quiet time,’ she says, ‘I would never have managed to get anywhere near finishing in the short time I still have.’

I wonder if there’s any adolescent typicality underneath the songbooks and melodies and operatic daydreams… ‘when I’m grumpy I rarely get inspiration’, she admits. But the attention and diligence required of serious composing demands a certain sophisticated devotion: ‘putting ideas together, developing them into a larger structure and telling a coherent story with the music’ is more about technique and experience ‘than just about mood’. Does Deutscher listen to pop music? Can classical and popular genres coexist? Apparently so: ‘At least melodic pop music speaks a similar language to classical music in terms of harmony and melody. Just to pluck a completely random example from the air, Irving Berlin’s song Let’s Face the Music and Dance is a stunning melody, based on the chords of the lament bass. And I’m sure any of the great classical masters would have been extremely proud if they had come up with this tune.’ When a friend—who is not a fan of classical—started humming a song by the singer Dimash Kudaibergen, Deutscher identified it as being from Mozart’s opera, The Magic Flute. You’ll likely recognise its famous Der Hölle Rache—the aria sung by the Queen of the Night. ‘So Mozart passes the test of being a good pop composer.’ I’m sure he’d be relieved to hear it.

Being so young, I wonder what success Deutscher will see in the next decade, by the end of which she will not yet even be in her thirties—and this lockdown still won’t have ended. Though if sustained confinement were to be a reality, I daresay musical history would be grateful for the countless operas, sonatas and concertos composed in the quiet it allows her—and if she retains that integrity of musical beauty, things may yet remain a little cheerful.