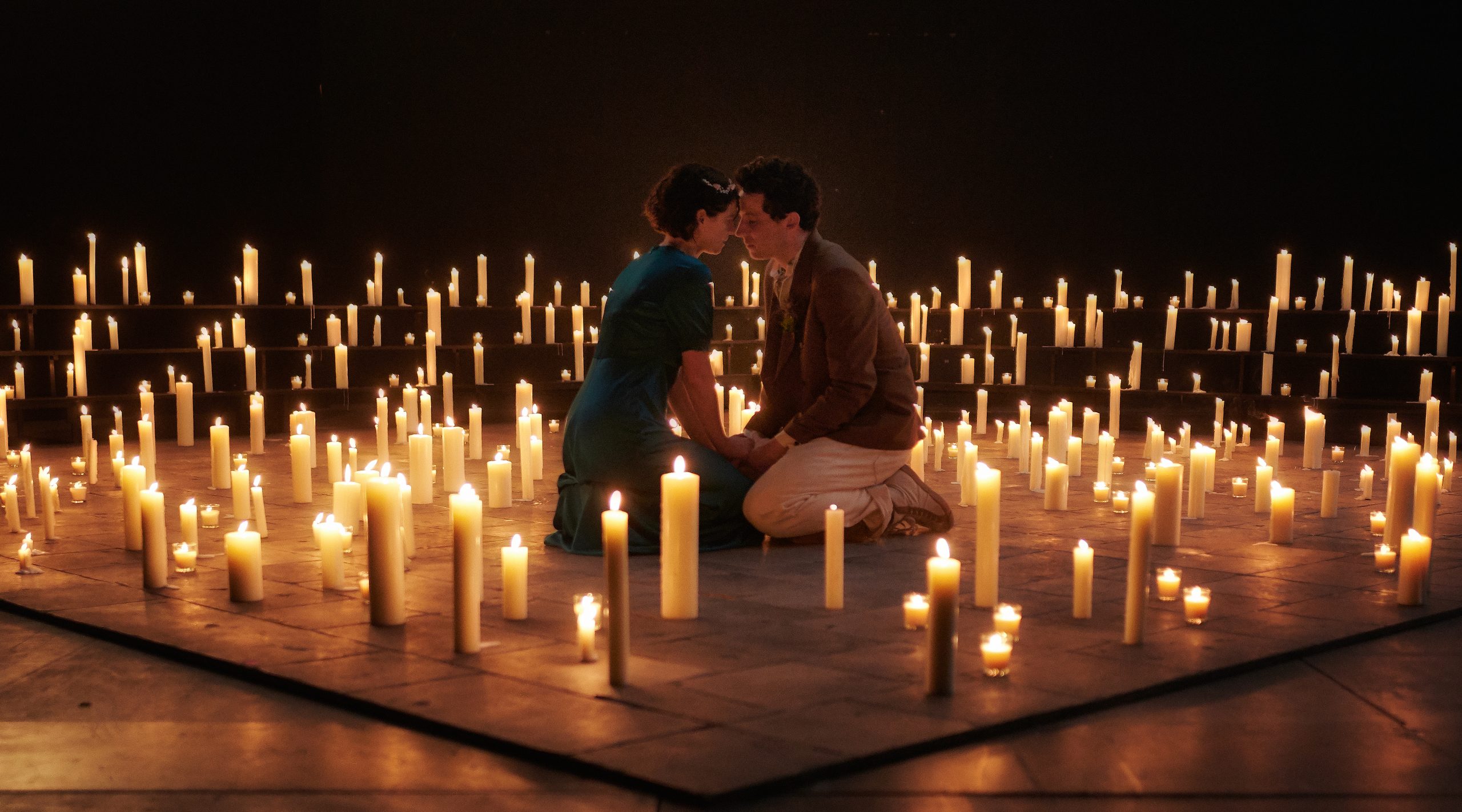 There’s a lot of hugging in the National Theatre’s Romeo and Juliet. Time and time again, we see delicately lit close-ups of hands on shoulders, around necks, clutching backs. It’s a production fascinated with touch and proximity, and thus one that feels antithetic to this era of distancing and isolation. Director Simon Godwin and Adapter Emily Burns’ interpretation of the age-old story is carefully crafted and intensely visual and makes some very interesting choices.

There is no weak link in the cast. Jessie Buckley as Juliet captures the joys and despairs of love expertly, and while Josh O’Connor as Romeo is outshone by Buckley, he does a good job of what could have become a very bland role. Tamsin Greig as Lady Capulet commands the stage, and her scenes with Buckley and Deborah Findlay as the Nurse have an excellent spark and pace. Shubham Saraf and Fisayo Akinade as Benvolio and Mercutio, respectively, stand out for their colourful, dynamic interpretations of roles which could be mechanical – the former particularly gives an excellent performance that moves fluidly from excitement to grief.

What struck me most about this production was the absence of a specific time or place. The costume choices appear deliberately impossible to place, as does the set: the action all takes place on the Lyttelton stage, but the interiors created, such as Juliet’s bedroom, have no signs of a particular era. There are a few details, however, that signal to us that this is not the present: knives are used instead of guns, the poison is kept in old-fashioned glass vials, and there is no sign of technology. It could be said that the National forms the setting and era: the aesthetic is reminiscent of many of their previous productions, and becomes the play’s most significant cultural reference. Overall, though, it seems that this production has been kept deliberately ambiguous, creating a feeling of otherness and forcing us as audience members to focus on the plot.

One of the direction choices most impacted by the choice of timelessness is the romantic connection between Benvolio and Mercutio. The pair kiss at the same time as Romeo and Juliet’s wedding, and throughout the play are offered as a parallel to the central couple. This adds a sense of the universal to the play’s theme of doomed love, as we see it affect people of all races and sexualities.

The other clear choice that set this production apart is the use of foreshadowing: at the beginning of the play, and at key moments throughout, we see images of bloodied hands and smashed glass, which eventually find their place in the final scene. This works excellently, really emphasising the feeling of doom and inevitability that permeates the piece. It’s also a testament to the new film-theatre hybrid that’s been cropping up over the last year: this piece shows the concept in its final, fully realised form, incorporating both the intimacy and intensity of theatre and the possibility and creativity of filmmaking.

The filmed nature of the production allows not only for foreshadowing but also some striking visual choices that may have been harder to pull off live on stage. Moments that stand out include the masked ball becoming a purple-lit rave, the wedding being surrounded by tens of glowing candles that seem to appear out of nowhere, and the creative use of a darkened stage space with a single strip of light where Romeo finds himself exiled: particular commendation must go to Designer Soutra Gilmour and Director of Photography Tim Sidell for creating such a visually striking world.

There are times, however, when the ambiguity of this production leaves it feeling disconnected or lacking. One of the most interesting choices is the opening and closing scenes, featuring the cast seemingly halfway between being themselves and being their characters: a great detail is the presence of the dead characters, notably Mercutio and Tybalt, in the closing scene where the full cast looks at the lovers’ bodies. This choice blurs the lines between the world of the play and the real world of the cast, in the same way as we see mid-way through the production when the masked ball cuts away to Buckley and O’Connor running around a barer bedroom set. While these choices were interesting, they didn’t feel developed or deliberate enough; if perhaps more parallels with the present had been incorporated, this could have been used to better effect.

It’s difficult to find a material flaw in this production – in part due to it being filmed. Everything is polished and visually beautiful, and every detail is exactly as intended. This, however, combined with the inevitability lent to the production by the foreshadowing, rids it of the emotional impact it could have had. We lose any element of surprise or rawness, as everything is so intricately composed and choreographed that there isn’t enough space for the emotional intensity a play as concerned with grief and love as Romeo and Juliet should hold central.

The question that remains to be posed, then, is this: why now? Why stage Romeo and Juliet a year into a global pandemic? Godwin’s primary response to the pandemic appears to be the focus on touch in the production: it reminds us of the power of human contact, and the depth of feeling that can only be experienced in person. The production could have had a further relevance: for a play about how the prejudices of adults impact young people, the ages of the cast took away this impact – had we seen a teenage Romeo and Juliet, perhaps the play would have read as a commentary of the experiences of young people following the pandemic and a particularly unstable political global climate. In many ways, though, the show feels like the beginning and end of a theatrical era: with theatres set to reopen in the next few months after a year where most remained fully closed, this production takes a classic play to show us how online theatre has developed over the past year, and what we can expect when the National’s doors reopen this summer.

The National Theatre’s Romeo and Juliet is available to stream via Sky Arts and on NowTV. For more information, visit https://www.nationaltheatre.org.uk/shows/romeo-and-juliet-film.