Amelia Horn speaks to actor George Robinson about the Netflix hit show Sex Education and being disabled on TV. 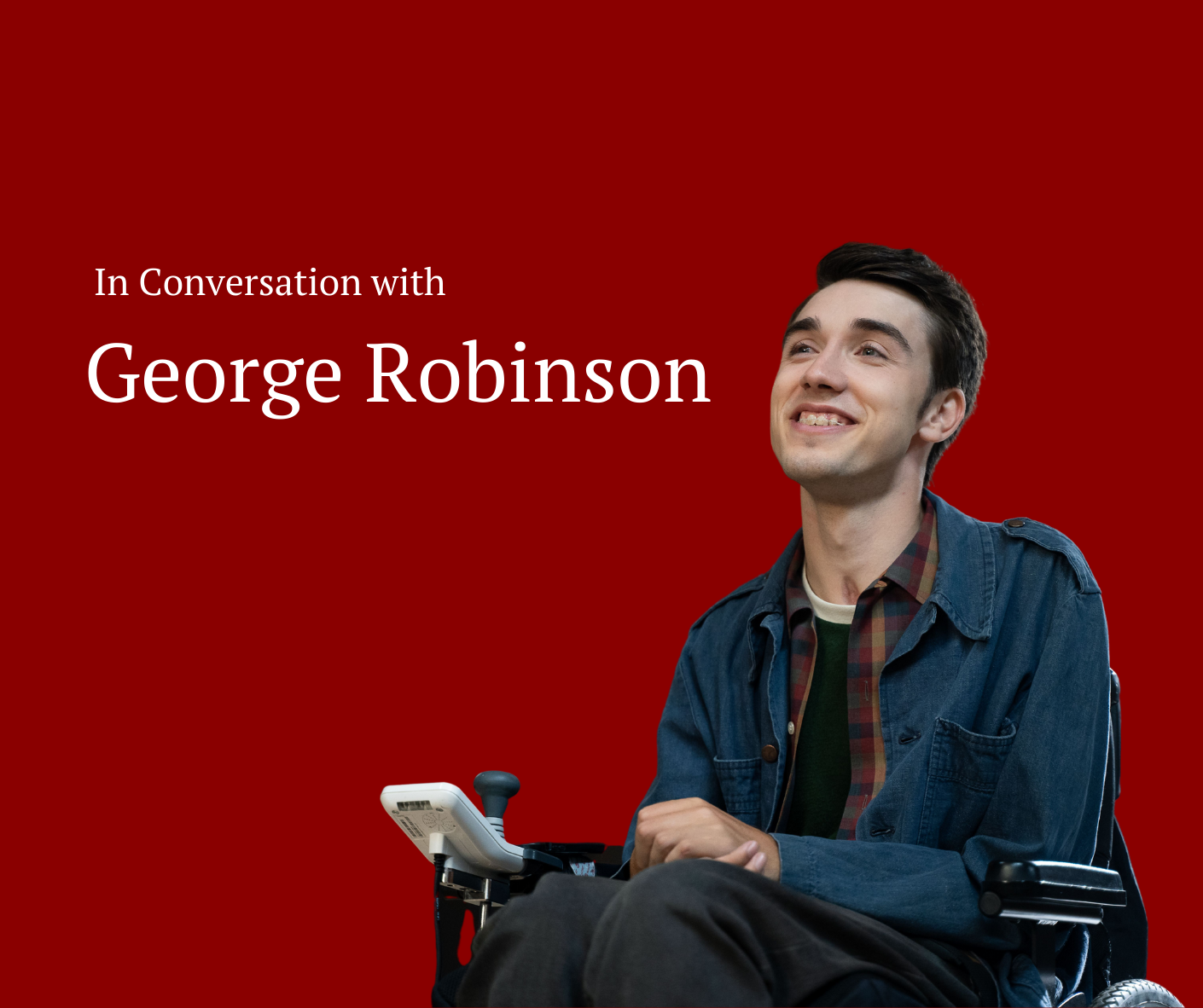 The hit show had over forty million households tune in to its first season, and I was one of the many fans who fell for a viral fake poster on social media which said that the third season would be out in January. We will, unfortunately, have to wait a little longer.

A highlight of the second season was the introduction of Isaac, Maeve’s sarcastic neighbour in the caravan park, who we all love to hate for deleting that voicemail. Cherwell sat down with actor George Robinson, who plays Isaac, to discuss his career, Sex Ed, and disability in the television industry.

Robinson, now 23, has had an interest in acting since his school days. ‘When I was in year 9, the school I was at were doing a production of Les Mis and I was doing drama at the time but I wasn’t 100% sure, and I didn’t audition for it… and then when I watched the production I got really annoyed at myself for not getting involved, and I vowed to myself never again. I just kept on pushing for it, and did a few of the school plays.’

At 17, Robinson sustained a spinal cord injury playing rugby. His neck was broken between the C4 and C5 vertebrae. He describes how this affected his interest in a future in drama.

‘I had been wondering about going to drama school, before that, but again, this injury made me sort of reconsider where I was at. When I came out of hospital, I finished my final year of school and considered trying for drama school, but at that time I wasn’t really sure of myself, and of myself as a performer. So I decided to go to university to study philosophy.’

‘I don’t think that was necessarily the fault of the university at all, but because it came too early for me, in terms of adjusting. I had this hugely life-changing event, and then I went back to finish my final year at school, but that was my old school, with people that I knew, teachers that I knew, buildings that I knew. I knew which buildings I could get in and out of. And going to university, all of a sudden I was in a much bigger city, in places that I didn’t know, with people I didn’t know, and it was a bit of a shock.

‘So I think I became more insular, perhaps. And that’s where the drama and the acting helped me to sort of escape a bit of that.’

While at university, Robinson began to explore the possibility of acting as a career: ‘I did a few plays with the Guild of Students, and then I took a screen acting class locally, and applied for an agency, and it all seemed to spiral from there. My second audition was for Sex Education.’

‘The casting call that went out for Isaac was essentially a list of characteristics, you know – witty, dark sense of humour, plays off negativity with sarcasm and stuff.

‘And I sort of read that and went yeah, I can do that.’

Robinson’s wry smile makes it clear that despite Isaac’s flaws, he is very fond of the character.

The casting call specified a disabled actor, but gave no requirement for a specific disability. ‘They basically said, as part of the call, we will write the character based around who we cast. The script that I initially read for was for someone who was an amputee.’ George explains that such a call made it clear that Netflix would handle what he terms the ‘boring logistics’ of a specific disability.

I ask if this type of casting call – where the disability is written in after the actor is cast – was becoming more common, and more generally about the challenges faced by disabled actors in casting decisions. Robinson links the problem to the type of content being produced.

‘Recently, there have been a lot of things based around old material, and often it’s harder to rejig something that’s already established to make it accessible, because there are boring plot elements that someone with a disability needs adaptations to make work.

‘But with [Sex Education], they obviously said that they would make sure all of that was sorted out, and it seems like it’s moving in the direction where writers are far more open-minded about not only casting people with disabilities but also following through and making it accurate and positive.’

More broadly, Robinson talks about the importance of inclusion in improving the representation of disability in film and TV: ‘Inclusion, but not only in terms of casting – I think casting is a great way of doing it, and I’m so incredibly grateful for the people at Sex Ed for the fact that they’ve got Isaac as a character at all – but also inclusion within the creative process itself. Because one of the first things you hear if you want to be a writer, is ‘write about what you know’ and a lot of the time writers don’t know disability, and that’s not necessarily a fault with them, but it’s something that hasn’t necessarily come into their thoughts so you see bits where writers reach out to charities, ask around.

‘They included me in the creation process of Isaac, for example. It’s definitely getting there, but we just need to remind ourselves that there’s some ways to go.”’

When asked if he felt pressure auditioning for the second season of such a wildly popular show, he shrugs it off. ‘I sort of demoted it to the back of my head to “I’ve got an audition for a Netflix show, that’s good enough in itself”, so that helped me relax into it.

‘And also I sort of ignored my uni work, so I was really prepared for it!

‘In terms of coming onto Sex Ed, I was just excited to be a part of it, really, and just join in with these people that I’d seen. Part of my audition process was a chemistry read with Emma Mackay and she was really helpful in that process.’

Sex Education is known for breaking taboos and for transgressing the boundaries of what is shown and talked about on television. Speaking about this, Robinson says: ‘When I watched the first series, I got it [the concept] immediately, in terms of what it was going for, and I guess maybe with the benefit of hindsight, it seemed obvious that if there was going to be one show to [represent disability accurately], it was going to be Sex Ed, with its wonderful diverse cast and frankness about things we haven’t necessarily seen before.

‘Sex Ed is a show that approaches all sorts of taboos. And you can see it in terms of how other shows since the release of Sex Ed have actually been inspired by Sex Ed to sort of, branch out and approach those as well, and you’re starting to see the entire narrative surrounding disability open up across TV. And it’s just really exciting to be a part of that.’

In response to my questions about season three, Robinson remains tight-lipped, saying only that filming was ‘going good.’ It was reported that filming had finished on the third instalment a couple of weeks ago, with a crew member posting an Instagram story with the caption ‘That’s a wrap!’.

The series was announced in February 2020, but filming was delayed due to the Covid-19 pandemic. Speaking about his experiences throughout the pandemic, Robinson gives an optimistic ‘It’s been alright.’

He describes feeling lucky that his continuing role in Sex Education has meant that he hasn’t faced some of the struggles other actors have had as filming for many programmes has been disrupted.

The season two finale saw Robinson’s character Isaac deleting a voicemail from lead Oti (Asa Butterfield) to Maeve (Emma Mackay). Bizarrely, some fans of the show chose to lash out at Robinson for this, and he was subject to online hate. He seems to have dealt with it with a sense of humour.

‘When I read the script initially I did think “Okay, Isaac isn’t going to be the most well-loved character” and I think that when this – outcry let’s say, and I started receiving a lot of messages of people – well, luckily, they searched my name, which is good publicity, I guess – yeah so they searched George Robinson, and then proceeded to message George Robinson with the profile of George Robinson saying “Hey Isaac, I hate you.”

‘I screenshot the funniest ones and send them into my mate’s group chat.’

He is aware, however, that this approach doesn’t always work, and debates the potential for these messages to have an ableist sentiment behind them.

‘I don’t want to seem glib about it. That’s just the way I personally process these things. And initially when [the hate] did start coming through, I hadn’t been in that position before, so I did flag it up to my mates in the cast, just saying, this is happening, just so you’re aware.

‘I have been wondering, you know, “Had any character done it, what would the response have been?” – regarding whether I was in a chair or not.

‘I think a lot of it is ingrained with the current state of meme culture; there’s a lot to unpack with it.

‘A meme is a very superficial form of communicating – you essentially add the context that you want onto this image. Isaac is a wheelchair user, but the reason people hate him or dislike him is for reasons outside of that. However, a meme superficially wants to get across what you want. And visibly, you know, looking at Isaac, he is a wheelchair user, and therefore – “Right, I’m going to send a picture of a wheelchair on fire” or “Wheelchair being pushed down a cliff.” So it’s hard to gauge whether that is in itself ableist.’

These are important questions, ones that will no doubt be further explored in the upcoming series of Sex Education.

Sex Education series one and two are available to stream on Netflix.