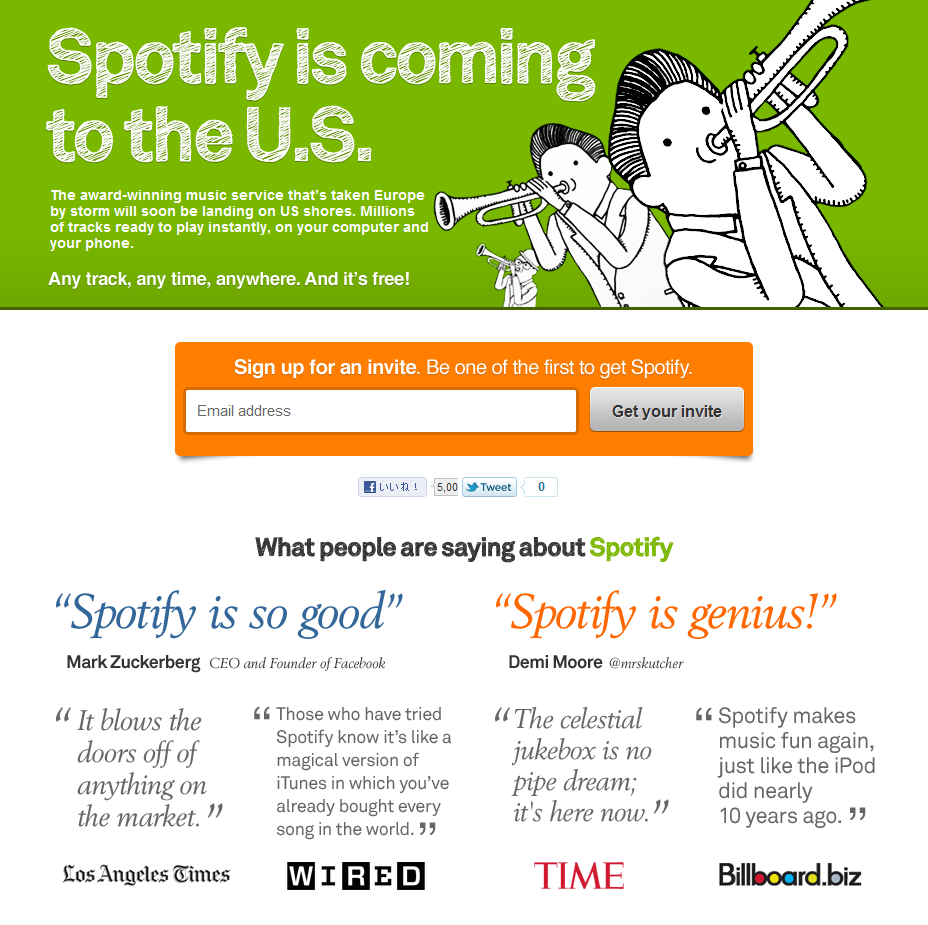 ‘Your design is clean, elegant, tight, and fast. While it’s clearly lacking some important features (the social stuff you alluded to, etc), I think you’ve done a great job with sequencing. You nailed the core experience around which everything else can later be built.’

Such was Napster founder Sean Parker’s first reaction to Spotify in 2009. Parker was so impressed by Spotify, he penned a ‘1700-word love letter’ to the music streaming service’s founder, Daniel Ek, in which he praised the product’s ‘core experience’. He considered Spotify the first and only digital music service to ‘meet and exceed the bar set by Napster’ before the latter’s untimely collapse in 2001.

12 years after Parker’s love letter, another functionality lies at the ‘core’ of Spotify’s product: the ‘social stuff’ which Parker only parenthetically mentions. Though it’s early days, there are already tell-tale signs that Spotify is morphing into a social media platform which causes users to fall into the same addictive, repetitive patterns associated with Instagram, TikTok, and the other usual suspects.

Social media platforms typically start out with noble(ish) intentions. Namely, making it easy for people to connect and share content with others. That this capability goes too far and the platform metamorphoses into an uncontrollable beast, ensnaring its users worldwide, is a tale as old as time (or as old as Facebook). Though we may think of it as ‘just’ a music streaming service, Spotify could be heading in the same direction.

Spotify’s 2018 integration with Instagram is an overt example: for the first time, Instagram users could post what they were listening to on their Instagram Stories. As a result, the same harmful habits which Instagram is frequently accused of cultivating crossed over from the visual realm and into the audio. Now it wasn’t just our peers’ appearances, social lives, and material affluence we could judge; it was their music taste, too. There’s also the capability to link your Spotify account to your Facebook profile. Upon doing so, you automatically follow dozens of ‘friends’ – another instance of Spotify’s services going beyond just ‘streaming’, and spilling into the ‘social’. Last month, Spotify and Facebook developed their partnership further by announcing ‘Project Boombox’, which will enable users to share what they’re listening to on Spotify directly via their Facebook News Feed. Whilst Spotify is notorious for failing to pay artists fairly, it is ensuring that non-artist users get more than their fair share of cross-platform social capabilities. It’s perhaps unsurprising that Spotify is so cosy with social media’s biggest conglomerate, given that when Zuck himself first used Spotify in 2009, he took to Facebook to express his admiration, setting his status to ‘Spotify is so good’.

So, there are clear signs that Spotify is shifting its focus to prioritise the ‘social stuff’. Why is this a problem? Does it impede our ability to just enjoy the music? It certainly could. Aside from its integrations with Facebook and Instagram, stranger still are the covert ways in which Spotify is affecting how we listen to music and share our listening habits. We are told time and time again that nobody’s life is how it appears on Instagram. We may continue to use them, but we are to some extent aware that social media platforms provide an inauthentic snapshot into others’ lives. The same can’t be said for Spotify. Spotify works on the premise that music, that deeply personal entity, is a true reflection of ourselves, our state of mind as we listen. For me, ‘authentic’ listening is selecting the music you listen to based solely on your own emotion and volition – your mood, a recommendation you want to investigate, a memory you want to re-stir. It’s personal and should not be fabricated.

You can, in nine out of ten cases, have a good guess at how someone is feeling based on the music they’re listening to. To draw on anecdotal evidence, I have met with friends and been able to predict what mood they’ll be in based on what they were listening to before we meet, which is shown in real-time in Spotify’s ‘Friend Activity’ sidebar. Your friends’ digital activity correlates to their real, present emotion.

Though this ‘Big Brother is watching’ sensation could be considered unnerving, I wouldn’t say it’s what worries me primarily. In many ways, this is how Spotify fulfils its core ‘social’ purpose: to let people share what they enjoy listening to with others who are interested. Soundcloud allows you to do the same when you ‘repost’ tracks. But in this case, ‘sharing’ music via Soundcloud is a conscious act, whereas on Spotify, the mode of sharing is automatic. Provided you haven’t turned ‘Share my listening activity’ off, you are broadcasting your listening habits to the world, in real-time. That you can then try and decipher someone’s frame of mind based on their listening habits is more insidious. Because, when this is the case, it’s no longer that you’re sharing what you ‘enjoy’ listening to; you’re sharing what you want others to see that you’re listening to. This becomes a slippery slope, heading towards an inauthentic representation of yourself, the kind typically associated with Instagram. We can select the music we listen to as a means of sending messages to our followers about what we’re doing, how we’re feeling, instead of selecting the music because we truly want to listen to it. In the process, we also risk commodifying the music which provides the soundtrack to our most personal and raw moments. Music enables us to channel our authentic emotion. The moment we start using it for performativity and exhibitionism, we jeopardize authentic listening.

The rise of the ‘playlist’ facilitates our communication via Spotify, and in turn, is partly responsible for the shift from streaming to social. The way we consume music has changed thanks to music streaming services: 40% of us prefer listening to playlists than albums. The reasons for this are manifold, but the trend is certainly in part connected to our increased use of social media and our obsession with user-generated content. Not everyone can readily create an album; musical talent and technical ability restrict us. But we can all create a Spotify playlist. We can gather an assortment of tracks, group them under a fitting title, even give it a 300×300 image, reminiscent of an Instagram square. Again, the customisable playlist is a great feature made possible by digital listening and is not overtly problematic. We should be allowed to create them and share the ones we’re proud of. The problems arise when the need to circulate these playlists via Stories, News Feeds and Friend Activity sidebars eclipses the reason for us creating them in the first place. Are we creating playlists which we truly want to listen to, or are we subconsciously pandering to a social audience?

In our collective defence, Spotify deliberately blurs the lines between social and personal listening to the extent that it’s tricky to tell the two apart. The Spotify algorithm is ensuring that its users listen to the same music as their friends, whilst the individual user is under the impression that they have made a ‘discovery’ all on their own. Comparing my ‘Discover Weekly’ playlist to my friends’ confirmed this. Why were we all suddenly listening to Caribou, Khruangbin, Men I Trust, Maribou State? All great artists, but not ones I’d ever heard of before, and I was surprised to learn that my friends also knew them. The user thinks that they have unearthed a hidden gem in their Discovery Weekly. Except these tracks aren’t ‘hidden’ at all: chances are, your friends are also just ‘discovering’ them. Spotify generates your Discover Weekly based on the content of every playlist created on its platform. This means that every playlist you create, personal or private, is fuelling the algorithm which creates Discover Weeklys for over 150 million Spotify users. We operate under the guise that we’re making these playlists for ourselves, but Spotify is also capitalising on our content to improve its own product. It’s an intrusion we permit to continue getting spot-on recommendations from Spotify, but it’s a phenomenon which makes me feel like we’re being duped. The unique pleasure of ‘discovering’ a new artist is abruptly curtailed once we realise that we are not alone in this discovery. The ‘deep cuts picked for you’ which Spotify promises us with Discover Weekly are part of a charcuterie board we have to share with the world.

Spotify’s shift from a music streaming service to social network platform is fully underway. And this brings some astounding possibilities for its users. Spotify has undoubtedly made it easier for audiophiles to access and share the music they love. But this comes at a cost, and not just for the artists whose salaries are side-lined by Spotify in favour of engineering-intensive integrations with social media giants. The individual user also suffers as Spotify becomes an increasingly social platform. Parker may have only made throwaway reference to it, but Spotify’s ‘social stuff’ could see us fall victim to the same dangers of ‘conventional’ social media sites: compulsive usage, false depictions of reality, and an inability to say whether our digital behaviour is truly for ourselves, or for our followers. Spotify promises to ‘soundtrack your life’. We must be wary of how it’s shaping it.