CherwellIndependent since 1920.
Sport OUBbC: Oxford unpick keys and win the hallway dance as they waltz... 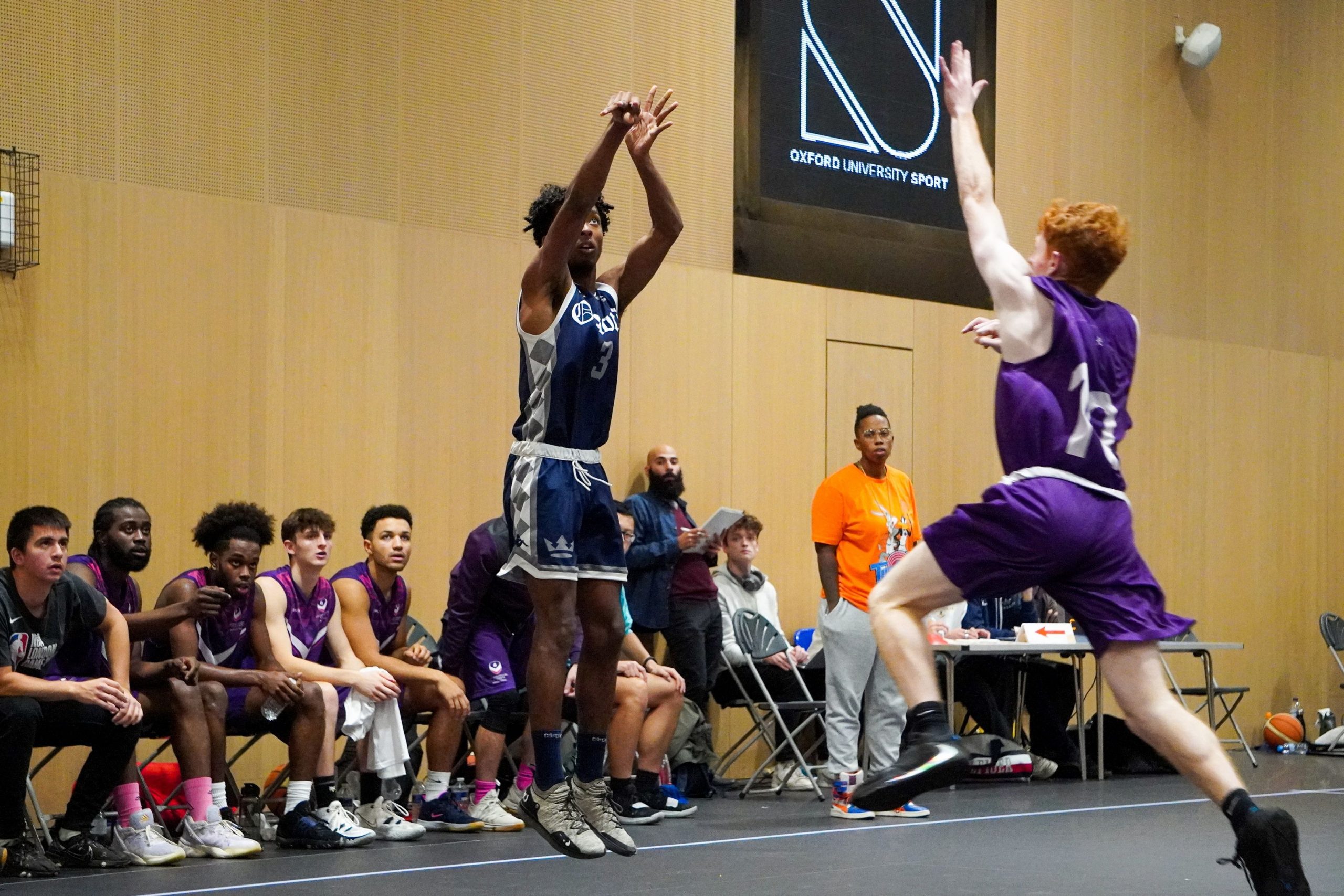 In a sports hall thronging with tens of people, the Equinox dance crew put on a halftime show. I know even less about dance than I do about basketball, so will not offer commentary on the routine. Yet, as they moved about in their various motions, I did think, “hm… I could do that… but that seems a bit cheap”. What I was thinking about was drawing some choreographic analogy with the game we were in the middle of.

But look, however crass this may be, I did see parallels. To be specific, I saw three. The most obvious and simple symmetry came from the middle part of the show. The performers stood in a semi circle and individuals came forward and did what looked like freestyle, to varying success. This was the climax of the routine and it was up to the individuals to make it worthwhile.

The game this performance bisected certainly depended on individuals to make it worthwhile. For Oxford, it came down to a holy trinity: Josh Soifer, Orin Varley and Alex Koukouravas. Between them, they scored 76 of Oxford’s 92 points.

Josh, as I have covered previously, is a player with a particular skillset. He’s a power forward and has all the strength and tenacity to merit the name. He’s Mr Inevitable. Every quarter begins with a quick Soifer two-pointer. Every missed three is met with a Soifer rebound. He also inevitably gets into foul trouble, and, inevitably, the resultant forced absences are much noticed. For those periods he is missed, Oxford lose that sense of security, that sense that a flying ball will be met by a flying 6’5” Canadian.

The thing about Josh is that he can’t shoot from far, or, at least, he doesn’t. His currency is rebounds and drives. Early in the first quarter, just as the teams were feeling out the rhythm of the game, he pulled off a drive to remember. Drives in basketball are both brutish and beautiful. And this where the second parallel with dance comes in.

The opposition ‘key’, the rectangular box below and in front of the hoop, is stuffed with opposition players, moving about at speed. A player that decides to drive to the basket has chosen a difficult three-second obstacle course. They must spin and feint and, yeah, dance their way through, unpicking that inscrutable morass. And once they’ve carved out the path, they jump and a defender jumps and in the air, they play chess. The shooter looks to pop it over the defender’s head but the defender starts moving his hand to block and the shooter instead, in an instant, moves his hand to one side and then the other and hits it round his opponent, and the chess match is over and the fate of the ball is up to the gods.

Up to the gods, yes. That is why the most hopeful of these shots are called ‘prayers’. But Josh’s shot was not a prayer—it was solid, and rehearsed. As it dropped in, I heard the loudest cheer I have heard at any of these games. I wish I had a photo of Josh’s face at that point. It contorted in such a passionate way that it’s hard to describe. The feeling-out-the-rhythm thing was over. The tone had been set.

So, that’s Josh. The value of Orin and Alex is a bit different. Yes, they can drive. But they can also shoot. And ‘can’ in both of those sentences is used in a high threshold sense. Orin probably had a better overall game. He’s the captain, but his leadership style is not rowdy or tough. The shout he leads of ‘1, 2, 3, Oxford!’ before each quarter sounds more comradely than rabble-rousing. This is a style I think I’m instinctively disposed to defend as it’s also the only one I’m personally capable of. But it does feel like the Oxford dressing room is a comfortable and welcoming place, and I think Orin has his part to play in that.

It also helps that he’s pretty good at basketball. He seems to always pick up points in a fairly steady way. But, as Akin Akinlabi—an up-and-coming player slowly and surely gaining himself more game time—says after the match, if we made a highlight reel for this game, it would all be Alex. Alex is the starting point guard. My basic understanding is that a ‘point guard’ is the pivot from which everything stems. They control the tempo of the game, and direct people to the right positions for various plays. And for a point guard, Alex sure does a lot of pointing. Yet at the same time, he’s popping up on the left, or the right, shooting a perfect three, or he’s driving round one, round two, round three. Some of the drives and shots on the bounce he managed on Wednesday were so creative. He was in the dancing mood.

You might have noticed that I don’t talk about defence very much. That’s because I don’t really understand it. Drives are a dance, but it does take two to tango. And here is parallel number three.

The weird acrobatics of these sequences is down to the weirdness of the defensive rules. Basically, neither player is really allowed to make contact with each other. I mean you can, but not properly, not forcefully. So, the result is that the defender is actively trying to prolong a version of the awkward-dance-when-trying-to-walk-past-someone-in-a-corridor. The attacker moves one way and the defender anticipates and copies. The attacker moves the other way, so does the defender. That’s why it’s so important for a defender to ‘beat him to the spot’, i.e. get in the way quick enough.

Defence is this strange, jittery samba. You’re constantly trying to anticipate your opponent’s movements, and you can’t be too far (or they’ll shoot), and you can’t be too close (or they’ll drive past). What’s funny is when an attacker successfully dribbles round you, you kind of just have to let them go—which means that when a drive unpicks a defence, the mass of players that looked so intimidating is transformed into a group of men sheepishly giving way to you.

I think for proper basketball people, this will all sound fairly inane. ‘Weird dance? What are you on about?’ I mean I’m meant to be learning, developing my understanding. They say that over time, I should start being able to know whether a shot is going from the moment it leaves a player’s hands. Reader, I’ve tried… but that’s still definitely not the case. They say I’ll probably build a connection with this team, and start caring about whether they win or lose. Reader, I have to admit I’m still more interested in the story than Oxford’s winning.

What I did notice, though, in this match, is that my focus on offence over defence is partly a sign of development. The Oxford attacks just seem to have more colour. Loughborough would come forward, and maybe they’d string some passes together, maybe they’d shoot a nice shot. But it all felt fairly routine—like they were getting points just to keep the game rolling on. When Oxford attack, I see characters and possibilities. I see Alex pointing, Orin shooting, and Josh flying in for the rebound.

Of course, there are two levels on which to process the story in these games. There is this one, where it’s slowed down, where basketball is this waltz of flying and footwork. And then there’s the bigger picture, the context. This was a cup game. Oxford have progressed to the next round. And although this is the Loughborough 4s, they really are a decent team, which tells you something about what Oxford are up against if they want to get back to winning Championship games against Loughborough 1s—like they used to a couple of decades ago. This was a tough game and probably Oxford’s best performance of the season. It takes them to a 6-0 record this season, which, as I said last week, is the best form in over a decade.

I don’t know on what level I will focus on the next match. It’s an away game at Brookes, whom Oxford narrowly beat a couple of weeks ago, but are expected to now be more in the flow of their season. Supposedly they have quite a few spectators at their games. Supposedly this will be the hardest game of the season so far. But I also suspect I will find myself gravitating back towards that other level of interpretation, where the physical is supreme, where Alex’s points are directing a dance routine, and where everything pauses as Josh crashes towards the hoop. 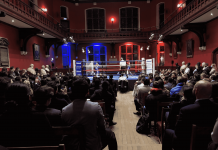 Town vs Gown – Boxing Returns to The Union 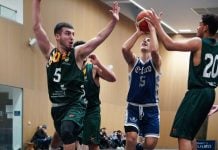 OUBbC: The end of a beginning