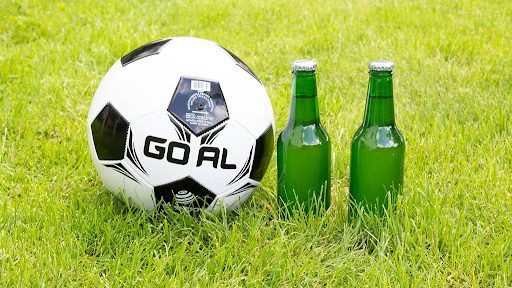 My dad’s biggest pet peeve: half-time binge drinking. After getting up from his seat to let the dizzy drunken man shuffle past just as half time is approaching, he starts cursing loudly and violently, albeit in Portuguese. Missing precious seconds of a football match sends him the wrong way. The English fan’s matchday habits of leaving seats early, or arriving late from the concourse, so that they can grab a pint at half-time has its collateral damage.

Tracey Crouch, who is leading the “fan-led review” of football governance, revealed that the government could lift the ban on drinking alcohol inside football grounds “in view” of the pitch. This ban has existed for 36 years due to the extent of hooliganism in the country. The new age of beer might be coming our way.

The sit-down-stand-up choreography, which is English football’s reluctant alternative to the Mexican Wave, is a famous routine, well known and excellently rehearsed by all fans who regularly attend matches. This routine may be happening a whole lot more often if the drinking ban is lifted. Why wait till half time to grab a drink? Very soon, you might be able to get your pint in midway through the first half. Cue the friendly yet frustrated chants of “is this a fire drill?”.

Supporters are allowed to drink at the cricket or the rugby “in view” of the pitch. With all due respect to cricket and rugby, football’s instants of excitement are often rarer, shorter, more dramatic, manic, adrenaline-fuelled, action-packed, moment-of-truth-charged, g’wan-silence-yeaaaah-defined. Football’s crazy. There are no tea breaks. There is no courtesy, or least any sign of respect, shown to an opposition player lining up their penalty kick.

When your team scores, the full pint in your hand might be up in the air, soaking all those around in warm, stale beer. Can you imagine the scenes: a thousand men dancing and singing under golden showers? If they’re selling Darkfruit Strongbow in the concourses, it won’t just be splashes of gold flying about in the stands, but also pink and purple. Old Trafford, the Theatre of Dreams, will surely be known as the Theatre of Drinks. Getting drenched in beer may be enticing for the young football mavericks, but it’s certainly not for all match attendants. There’s Boxpark on an England matchday for that.

Tracey Crouch makes the point that half-time drinking means “we kettle people into drinking quickly”. There are compromises to be dealt with though when it comes to football and drinking. It would perhaps be too harsh on English football fans to introduce Scottish football drinking rules, which would mean that all alcohol is forbidden in a football ground. On the other hand, it would most likely be far too permissive to let stands across the country once again turn into beery water parks, and let stadiums’ staircases turn into sticky slip n’ slides.

There is also a strong sentiment among the British public that football fans simply can’t be trusted. As shown on the recent documentary series Fever Pitch: The Rise of the Premier League, The Times wrote that football in the 1980s was a “slum sport played in slum stadiums and increasingly watched by slum people”; many people believe that the culture of these darker times survives today; many perceived the scenes on Wembley Way in July to be the manifestation of this.

At first, the ban would only be lifted at lower leagues, so that data could be collected. Tracey Crouch’s main reason for lifting current restrictions on drinking was to help the lower league clubs, whose beer sales account for much of their annual income. Though it may be hypothetical to say so, mix beer with a sore defeat, and the pint cup could become an effective weapon for the football fan. You could see pint cups flying like arrows onto the pitch when the opposition scores, much like what the abusive Hungarian fans did against England. Matchday incomes earned might quickly be offloaded on FA fines and other policing costs. Then again, with that in mind, we could see more Declan Rice-inspired celebrations, where opposition players pretend to chug beer from cups. Surely, those celebrations would be so iconic that EA Sports would have no way of not including them in PEGI 3-rated FIFA games by 2024.

Booze seems set to return to football. The nature of this new age in drinking- a consolidated revival of hooliganism or the nativity for carnival atmospheres in football grounds?- will certainly be one to look out for.