Maurício Alencar discusses the influence of politics on Brazilian football. 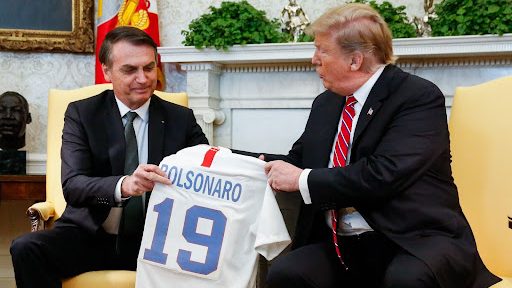 On the 7th September 2021, Brazil celebrated its Independence Day. In São Paulo, to mark the day, thousands of marchers descended on Avenida Paulista. The atmosphere perhaps was not so jovial, however. Anxious and irate marchers had in truth showed themselves in São Paulo to back Bolsonaro’s vision for a supposedly orderly and progressive Brazil where God is above all, and to lambast the Supreme Court’s tyranny for investigating Bolsonaro, and to gather some Trumpian momentum in the fight against the unlikely and unconvincing possibility of electoral fraud one year before elections take place. The radiant yellow colour the flood of marchers had created was a familiar one, a shade of yellow that would normally be attributed to the Seleção’s iconic football kit. But as Bolsonaro spoke to the thousands, the yellow of the Seleção shirt had seemed to defamiliarise itself from football, and had now become the token symbol for Bolsonaro’s far right agenda.

It’s nothing new, politicians using football for their own good. Some of Brazil’s 1970 World Cup triumph can be accredited to General Medici’s, Brazil’s dictator, interest in politically investing in the national team and using his military to improve the players’ fitness levels. The country’s leading football writer, Juca Kfouri, writes that “I never let the dictatorship steal even what was most intimate to me”. Football and politics could easily be separated. Brazil’s success on the pitch could never be a politician’s success.

Pelé had potentially consummated the hazardous marriage between Brazil’s dictatorship and its football when he shook hands with Medici. In a review of Pelé’s documentary film on Netflix, Jonathan Liew of The Guardian writes: “Of course, he admits, he had an inkling of what was going on, even as he posed for photographs with General Médici at official functions, beaming and shaking hands in pictures he must have known would be distributed around the world as pro-regime propaganda. But even now there is no real contrition, no twinge of moral anguish, much less genuine remorse at a course of action he insists was the only realistic choice.”

But it indeed was his only realistic choice. Access to education, let alone high-quality education, is limited. The Brazil team’s visit to the presidential palace was less of a polite invitation than it was a stern-faced command. The denial of a handshake with a dictator perhaps would not be the most sensible choice for Pelé’s own career as a footballer in the years after. It’s easy in retrospect to assume Pelé should feel regretful for not forming his own defiant identity off the pitch. Carlos Alberto Torres, the captain of the 1970 team, put it in an interview in 1988 that the players were only interested in “our careers, the professional pride of winning a World Cup”. Then, the effervescent colours of Brazilian football in 1970 carried a natural purity and artistic uniqueness that could be protected against invasive socio-historical readings. The handshake was not a handing over of Brazilian football’s collective mould of individual romanticism to the state’s powers.

Dani Alves, the world’s most trophy-successful player living in a new age of player activism where footballers’ political voices have become ever more significant, finds himself in very different circumstances to the position Pelé and his teammates found themselves in the aftermath of their 1970 World Cup triumph. Dani Alves has publicly supported Bolsonaro in using his slogan “Brasil above everything, God above everyone” on Instagram- Pelé was never deliberate in showing his support. Neymar’s dad commented under Alves’s post with a fist-bump emoji. Lucas Moura is another prominent footballer to have declared his strong support for Bolsonaro. Polling suggests that Jair Bolsonaro in fact has a very high disapproval rating across the country, despite the mass demonstrations on the 7 September. It is very much in Dani Alves’s consciousness that his political voice carries a significant level of importance to politics in the country. And as Dani Alves’s apparent words of support for the former military captain are complemented by an image of him wearing the national football team’s shirt, the iconic Brazilian shirt seems to embody not the national pride shared by a whole country, but a nationalistic pride felt by a minority in a country.

It should come as little surprise that the Brazilian shirt seems to have had its symbol stolen. In part due to a number of factors including the 7-1 defeat, performances at recent World Cups, a growing European-led distaste for the “joga bonito” style,  and the demise of the reputation of Brazilian leagues, Brazilian football’s pedigree now finds itself in a vulnerable state. An untidy culmination of Brazilian football’s recent failures came in Brazil’s World Cup qualifier against Argentina, where health officials rushed onto the pitch mid-play to tell some of Argentina’s Premier League players to quarantine – they had been in the country for three days prior and the whole world had been alerted to the fact that they were in the squad ready to start. In a country where over 600,000 people have died from COVID-19, this sudden dismissal had nothing to do with health safety. This was a moment in which the incompetence of the country’s various governing bodies and the general bagunça (utter shambles of a mess) of Brazilian politics had violated, trespassed, and over-spilled onto the country’s most valuable safe-space. The purity and innocence of the Seleção has finally been ruptured, eclipsed, and defaced by political calamity. The far-right capitalised. It’s Jair’s shirt… for now.