CherwellIndependent since 1920.
Features In the belly of Jordan Peterson: Ambivalence in question with the ersatz... 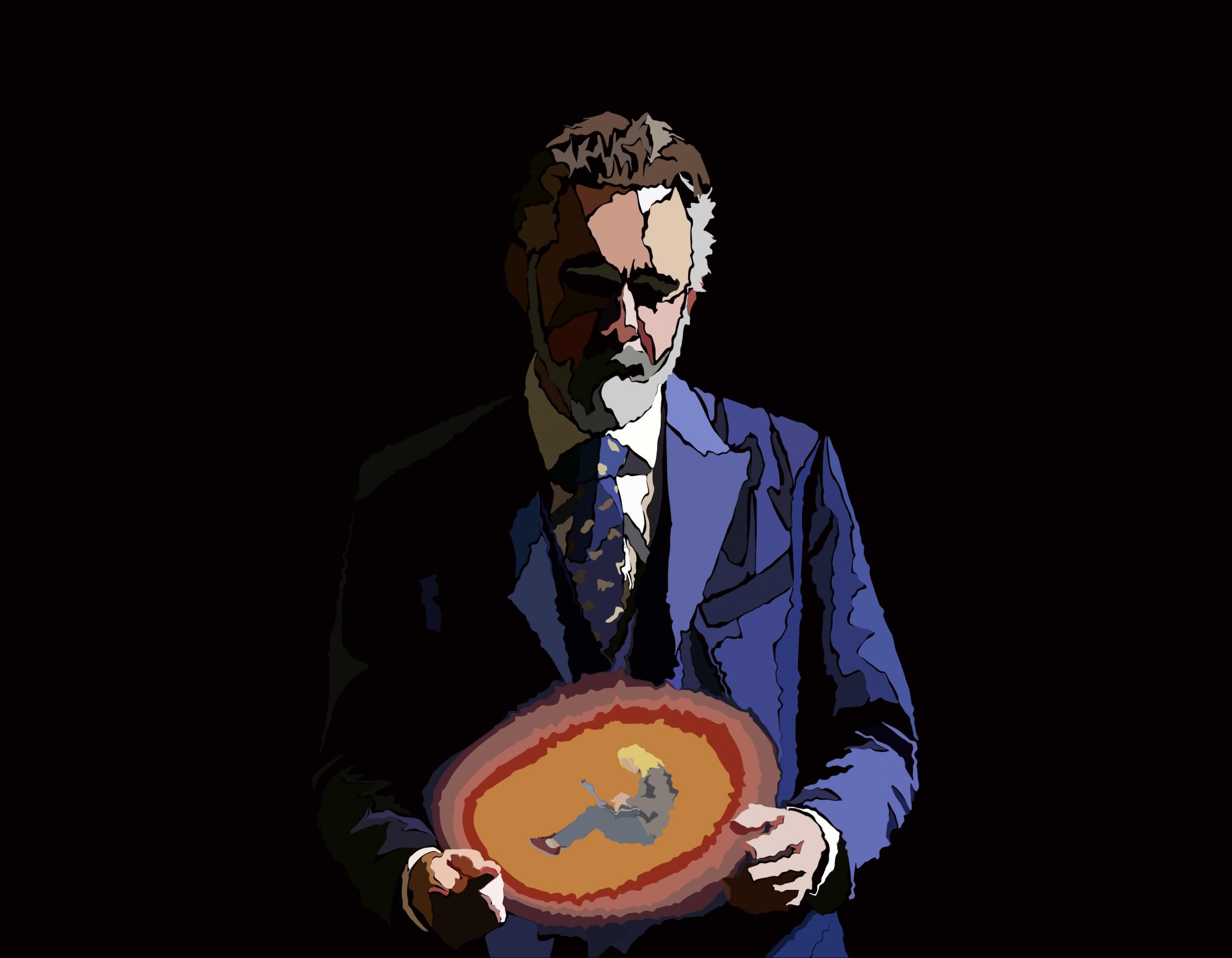 I am sitting on the front bench in the Oxford Union chamber. Next to me, laptops are open.

‘Who do you write for?’, asks the boy on my left. This boy is my friend for the next hour. We shake our heads at the same things, he thinks my notes about lobsters are funny (he was looking at my laptop screen. Thank God I never broke character).

I certainly am independent – independent from the world of amateur journalism entirely. The boy on my right is in on the whole thing – he saw me come in late and sneak onto the front bench.

‘Just open your laptop and do an essay or something’, says boy-on-the-right.

I oblige, and title a document: Professor Jordan Peterson – Oxford Union 25th November 2021. There is excitement in the room, and I am in the world of journalists now. It feels great.

The front rows of the benches ahead of me are for Peterson’s guests. This is what friend-on-the left and I infer, anyway, since they’re dressed much better than anyone else. Lots of shirts and brogues. I spy a fur hat. I spy…

Jordan Peterson. There he is outside the glass door. We have all stood in the cold, in a line, for some considerable time to see this man. But why? A happy boy outside told me that Peterson ‘had been incredibly helpful for him’; in fact, I really had the sense that he might have changed his life. But otherwise, the Oxford ‘position’ seems to be one of curiosity garnished with scepticism. This is certainly my own. Perhaps being a Jordan Peterson ‘stan’ – an overzealous or obsessive fan – lacks the sort of nuance that these scholars might purport to possess.

Peterson limps into the room. From the front, he is handsome and thin. His hair is dark grey at the forehead and fades into silver at the collar. He walks up to the platform and there is a standing ovation. I look around and can’t see any of the sceptics I met outside – they must have transformed into ‘stans’. Boy-on-the right joins them. Friend-on-the-left and I stay seated – besides, I committed to journalistic neutrality just five minutes ago. There are some ‘booers’ but they’re nowhere to be seen amongst the standing-stans. I feel very confused.

From the back, Peterson is an old man. At the pub that night someone will remind me of the First Rule for Life: ‘stand up straight with your shoulders back’ (see 12 Rules for Life: An Antidote to Chaos, 2018). His body is angled, and the way he hunches pushes his frame through his clothes. Something has changed. But, he moves with grace. Jordan Peterson is well dressed and dignified. There is a special elegance in the way he twists his hands as he speaks.

The title of the talk is Imitation of the Divine Ideal, he says, and he tells us about perception, truth, artificial intelligence, the problem of interpretation, cybernetics and robots. I try, but I really can’t follow. This isn’t the Jordan Peterson I (sort of) know. I’ve read the first few chapters of his book, I’ve seen the Žižek debate and I’ve watched him ‘own’ and be ‘owned’. I’m sure something is different, and this isn’t surprising: the Professor has recently overcome a clonazepam addiction and survived a coma, and he now lives by an all-meat diet. Peterson faces the room like a man talking to himself. His gaze hovers at floor-line; the upper chamber is all but invisible. There is an inwardness about the whole address. Richard Dawkins, who is sitting ahead of me, nods along. Some latecomers enter the hall and the bench opposite squeeze up. A girl with perfect hair sits down with the boys in boat shoes.

Peterson tells a story about a child who is scared when he sees a dog on his way to kindergarten. In the first version, he has a panic attack, spurring a lifetime of panic attacks, enabled by what Peterson calls the ‘Oedipal sacrifice of his mother’. In the second, the mother tells him to be brave and he walks past the dog to school, and he is fine. Here is some familiar Peterson-style argument I can follow. He talks about metafictional narratives, and I am reminded, with sadness, that I am not a real journalist after all. I make my pretend journalist notes anyway.

He loses me again. Now Peterson is talking about chimpanzees, rats and dogs (lots of dogs). He hasn’t mentioned lobsters yet (friend-on-the-left laughs).

‘Do your controversies overshadow the subtler parts of your work?’, someone asks. Peterson pauses for a long second.

‘No’, he says. ‘People always hate when I tell them that, on average, women are shorter than men. That’s not a social construct, and it’s not controversial: it’s just a fact’.

Everyone laughs, including me. Boy-on-the-right looks up from his computer screen. He shakes his head in disgust. He’s researching for an assignment, and he hasn’t listened to a word of the talk. This is his first sign of engagement since the standing ovation (this, being at odds with the rest of his behaviour, leads me to believe that he is deeply confused).

he thinks I am crying.

I laugh even harder.

I know how this goes: we, as (supposedly) rational thinkers, subscribe to the first step of Peterson’s argument. But now we are on board the Peterson train, and if we stay aboard, we will soon pass under rough skies.

But don’t be scared, boy-on-the-right! You should get on the train with us – what no one has told you yet is that you can get off wherever you like! Get on with me, and I’ll stay with you so long as the sky is flat.

I am not telepathising hard enough, and boy-on-the-right is still staring at his screen. Think about John Stuart Mill, boy-on-the-right! You just cannot be sure that a ‘silenced’ opinion doesn’t contain some element of the truth…

We’re getting to the end of the talk, and finally! Peterson pushes me too far. I climb off the train with friend-on-the-left. We sigh and feel the sweet validation of arriving where we had expected.

‘What a total waste of an hour’, says a girl at the end of the bench. It’s true, Peterson was incoherent; but I know much more than I did before, and I am glad. I have been in the belly of the beast, and I have taken its temperature.

I have learnt more about boy-on-the-right than the Imitation of the Divine Ideal: I have seen the people who truly won’t listen. Peterson is right about that. Even face-to-face with the enemy, he won’t look up from his screen. Why had he even come? He must have been curious like me; and then he must have been afraid. I imagine dead dogmas whizzing around his brain; they’re pastel pink and green because they’re actually Instagram infographics. I know I’m right! They are saying. I just don’t know why!

Jordan Peterson is burning in a fire of his own making – bowing under the pressure of the twenty-four rules he has stacked upon himself. It feels like his career will not continue as before. I think I understand why he believes in God, because he believes in big ideas, and because it all seems to be too much for this man. I do not hate him.

The talk finishes and there is another standing ovation. A head of bright red hair pops up and I recognise the Jordan-Peterson-changed-my-life boy from outside.

I remember a Tweet by ‘bad-bitch’ Democrat A.O.C (Alexandria Ocasio-Cortez) from November 2020 –

“Is anyone archiving these Trump sycophants for when they try to downplay or deny their complicity in the future? I foresee decent probability of many deleted Tweets, writings [and] photos”

– and look again at the ‘ambivalent’ ones cheering all around me.

The students in this room are probably not Trump supporters, but this rhetoric of surveillance has filtered into their consciousness, nonetheless. If A.O.C doesn’t scare people out of the ‘wrong’ ideas, it seems like she just scares them out of expressing them: and I can see that all we have done is force ‘stans’ to adopt a façade of scepticism. The truth of their feelings has simply been pushed one layer deeper, and all it takes is a round of applause to lift it right up to the surface; the curtain raises for just a moment.

What happens when people are alone, or online? How does suppressed desire express itself then? And what will happen in the polling booth when no one is watching? Many in this room of young men (they make up ninety percent of us) will believe that they are subject to a culture of conformism and hyper-vigilance, and we should diffuse their fears by acknowledging them, not silencing them – lest we risk alienating people further (and even pushing them further to the Right). Listening more attentively, and even gently, could invalidate Peterson’s and A.O.C’s narratives of hostility, and we may find that this is a conflict that we no longer need, and that there is no Culture War without its student soldiers. In some ways, the Jordan-Peterson-spectacle is funny; and we can laugh. But we cannot dismiss these people. Perhaps instead we might look a hunched Professor in the face and ask ourselves: what’s it all about?

‘What do you think you’ll submit?’, asks friend-on-the-left as we close our laptops.

Full tweet: “Is anyone archiving these Trump sycophants for when they try to downplay or deny their complicity in the future? I foresee decent probability of many deleted Tweets, writings, photos in the future”