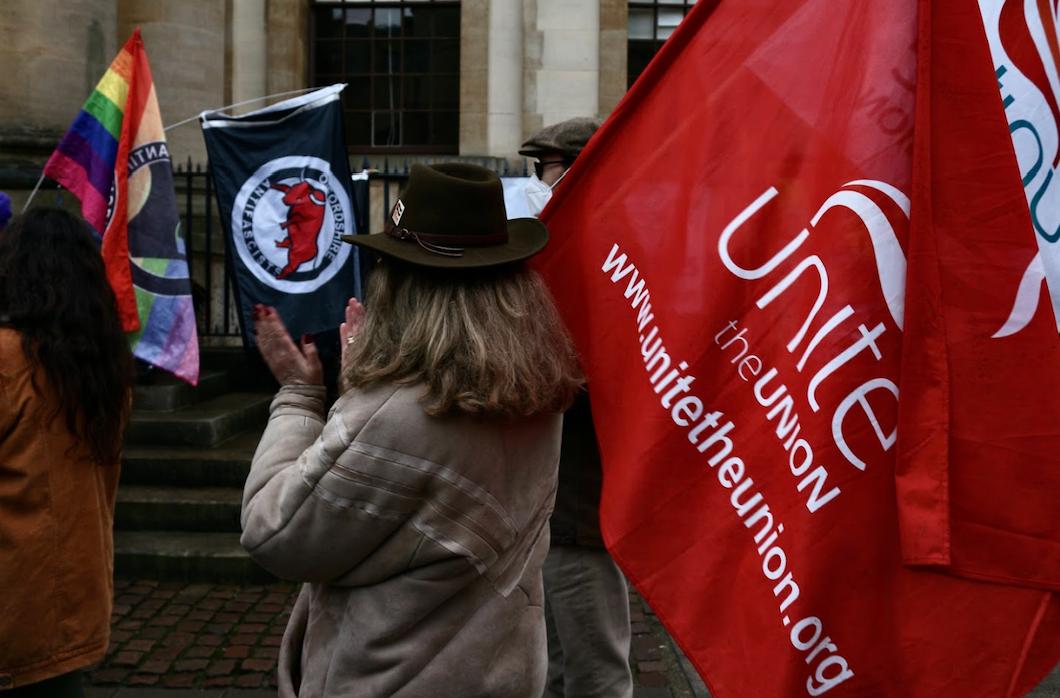 The Oxford SU organised a protest against the proposed Nationality and Borders Bill this past Sunday.

The group gathered around the steps of the Clarendon building that afternoon. A mix of student and outside organisations attended the event, including representatives from various local unions, student societies and Oxford chapters of Amnesty International and Solidaritee.

There were around sixty protestors in attendance, with many passers-by stopping to listen as well.

Some groups came to the protest with broader aims than just the bill in question, calling for a united, working-class response to all of the current government’s potentially harmful policies, but the core grievance remained the immigration bill in question. According to the SU’s website, this act, if passed, could endanger asylum seekers, revoke British citizenship without notifying the affected parties and, through the creation of a temporary protection status, “restrict the refugee students’ access to higher education”.

Anvee Bhutani, president of the SU, highlights this last consequence as one of the catalysts for starting the demonstration. She underscores that education is key to integrating and advancing in society and students’ rights are often overlooked.

Multiple speakers spoke about their personal experiences moving to the country or as children of immigrants. One student who had become a naturalised British citizen said that he has always been wary of his status in the UK, but now genuinely fears that his citizenship may be revoked.

There was a heavy focus on hearing from such students and emphasising that countless more cannot speak in public out of fear of this very bill.

Even so, Kemi Agunbiade, VP Women, insists that “it shouldn’t have to be about us for us to care”. Students and groups with no immediate connection to immigration and refugee rights insisted on the negative outcomes of this bill and how it affects society at large.

Philip Hutchinson, a member of the Oxford Climate Justice Campaign, spoke of an impending mass migration due to climate catastrophe and stressed the United Kingdom’s obligation to welcome and support refugees during this time of particularly high need for refugees. He urged students to resist the bill, which contradicts international law and the 1951 Refugee Convention, and to “not let the government tarnish the reputation of our nation”.

With the Nationality and Borders Bill at a late stage in the legislative process, there were mixed emotions present at the demonstration. Some believed it to be a done deal, with little resistance possible besides disregarding the law once in place and future action against the Tory government. Others, especially the SU organisers, kept up a general display of optimism, urging everyone to “keep fighting” and reiterating their support for immigrants, refugees and all people of colour in Britain.

Moving forward, the SU encourages students with concerns about the bill to come forward in order to allow the organisation to better represent their issues. In the meantime, they have compiled a list of online resources that will be available on their website, including letter-writing templates to send to their representatives in the House of Lords.