Anya Biletsky speaks to some of the cast and crew of Casterbridge about adapting Hardy to the modern day and the challenges of staging a play outside Oxford. 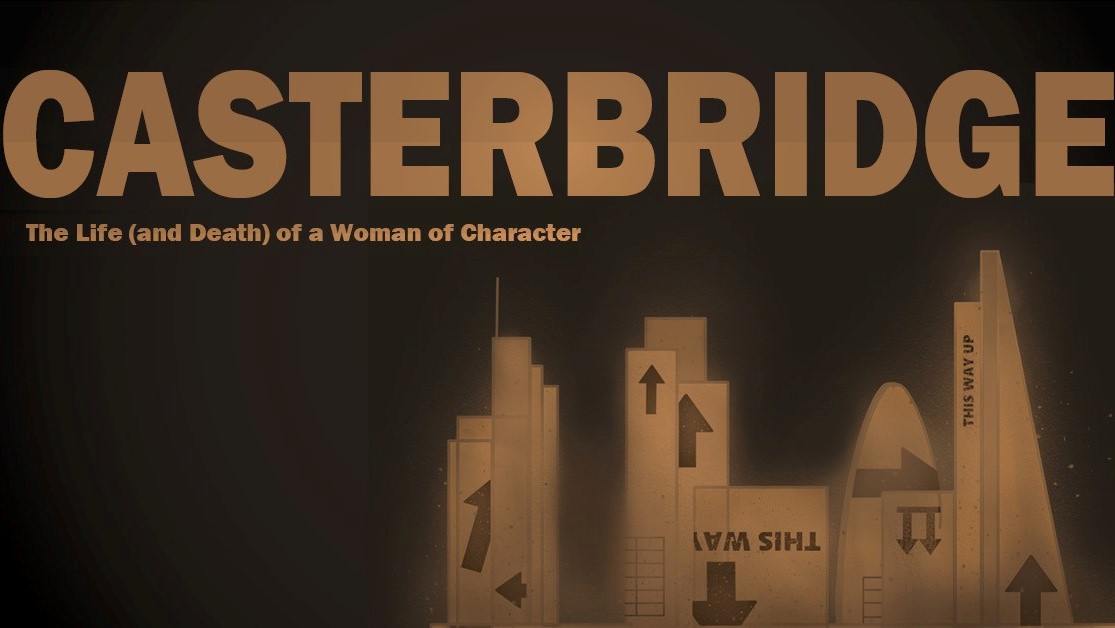 Not the Way Forward Productions’ original play Casterbridge, a female-led retelling of Thomas Hardy’s classic novel, sees its London debut at The Space this week. We spoke to writer-director Dorothy McDowell, producer Ana Pagu, and actor Leah O’Grady about the process behind Casterbridge ahead of its five-day run.

What made you decide to adapt Hardy’s The Mayor of Casterbridge?

Dorothy McDowell: It’s a book I’ve really liked for a very long time – I first read it when I was a teenager, and it was the first proper ‘grown-up’ book I remember really enjoying. Then, by coincidence, I did it for A-level, many, many years ago now. I remember, when I was meant to be doing my notes on it for revision, I was sitting there thinking, ‘if this were a film, this is what it would look like’. When I was graduating from Oxford, I was looking for a play to put on. If you skim down The Mayor of Casterbridge, it’s really about two people, Henchard and Farfrae, and about their rivalry and their relationship with each other. Once you get something that has that core, that two-person dynamic, it gets much easier to cut it down to an hour, to something four actors can do.

How has it been adapting the novel to a more modern setting?

Dorothy: I’ve enjoyed it. It’s a bit like writing fanfic – you get to play with characters that you really like. It’s a bit terrifying, because the nature of novels is that everyone who reads it has a vision of it in their head. This is how I see The Mayor of Casterbridge. Every single decision you make when adapting it, you know you’re going to horrendously disappoint someone who likes the book. It’s quite fun because you get to do exactly what you want to do and you have to learn not to worry about what anyone else is going to think of it. But this is a 200-year-old classic and I’ve changed bits of the plot, I’ve taken out a character…Thomas Hardy would be turning in his grave, which is a slightly horrifying thing for a good English literature graduate, as I am, to think. Grown-up fanfic, shall we say. Fun.

If you’ve been involved with any Oxford drama, how has your experience putting on a play in London compared to doing so in Oxford?

Ana Pagu: I’ve produced shows in Oxford a fair bit in the past three years, with a two-year hiatus like the rest of us. I think the main difference has been figuring out how to market to a London audience. There are so many people in London and a lot of them go to the theatre, but it’s really hard to tell them that this is a show that is happening among the other 300-odd shows that are happening today, and that it is good and that you must come and see it. We’re going to find out next week [as to the success of the marketing]. But there is not the [Oxford] culture of ‘there’s a show on’, and the whole student community floods the BT. It’s fantastic to see, but it’s not the same in London.

Dorothy: Ana and I were prolific student drama people at Oxford. I think I did around 15 student shows. The thing I found weird was that it was quite like doing an Oxford show, because all my actors are people I had either met in Oxford or had directed when I was a student. But this is a bit more serious, and there’s a lot less support. The only thing stopping this from falling through is me, me and Ana sitting there trying to hold up the sky, trying to make something go ahead whenever there isn’t the infrastructure in place.

Leah O’Grady: The version of Casterbridge which was done over the summer last year was my first show and then I did Songs of the Silenced at the BT in Michaelmas which was great fun, very different to this. I’m directing something of my own at the moment, and [Casterbridge] has made me very grateful for the infrastructure the university provides, because watching you guys do it is quite scary. But like Dorothy said, it’s amazing to work with people trying to do this professionally, and a lot of the rest of the cast are auditioning for drama schools. It’s a privilege to be able to work with such amazing women who are aiming for the stars.

How has the rehearsal process been? Have rehearsals been happening in Oxford or in London?

Dorothy: In London, mostly. That’s actually a big difference – at uni you can get a space to rehearse in for free. We have the shed at the bottom of my garden, which has been getting far more use than I wanted it to be getting. Massive shoutout to New Diorama Theatre Broadgate, which is a theatre in London which has a two-storey building that they let anyone rehearse in for free. It’s really saved my neck a couple times.

Leah: We blocked out all the scenes, and in the last week or so we’ve been running them. It’s been a lot of fun. Me and one of the other actors [sic], Lara [Deering], have seen the show develop from its infancy in June of last year. I’m multi-roling, as is Lara, [which involves] playing around with the characters. One day Dorothy will tell me to ‘do this like you’re so disgusted with her [that] you can’t even look at her’, and ‘do this like you’re really pissed off’, or ‘do this like you’re really stressed, like you’re hysterical’. It’s a bit of a mad play, and a lot of quite mad things happen, because that’s what happens when you translate Victorian characters into the modern era. It’s been a lot of fun and a lot of jokes.

Have you had any memorable moments during rehearsals?

Dorothy: We had an actor who was missing for a bit of rehearsals today and we needed to redo a scene, so I filled in for them. When I was in first and second year of uni I did quite a bit of acting, and I haven’t done any since. But I got weirdly into it, and forgot Leah wasn’t just a prop. And I sort of whacked into Leah. I don’t know what came over me!

Ana: And it wasn’t even 24 hours apart, so the understudy didn’t even get a chance to be an understudy.

Dorothy: Maya, who’s our understudy 2.0, learned of our existence at 9am one morning and was in rehearsals by 2 that afternoon.

Dorothy: I spent about 20 minutes one time trying to force Leah to do an impression of Joey from Friends, going ‘How you doin’?’.

Do you have a favourite line from the play?

Leah: I like “Where is she? Where’s that witch?” Also, “Mary, you’re drunk, sit down and shut up.” Oh and also – I’m getting carried away here – when [Mary] says “I mean it!” and [the male character] replies, “You look insane, sit down.” They’re just people being angry at Mary.

Dorothy: I really love the book, and there are lots of beautiful lines in [it], and I had to get rid of all of them. My favourite line is “It doesn’t matter why things happen, the most important thing is that they do”.

Ana: I like the line we’ve put on our advertising – “I don’t see why people who have got husbands and wives shouldn’t sell them to those in need of such articles.”

In three words, why should Cherwell readers go and see Casterbridge?

Leah: Am I allowed to say girlboss, gaslight, gatekeep? That’s what everyone says whenever they hear about the show.

Dorothy: Support Oxford students. I remember when I was in third year I was wondering how to put on a show in London, whether it was possible, how people do it. We know the answer to these questions now!

Ana: Come and ask us questions if you would like to do this – we can help!

My answer is a whole paragraph, but I’ll try to distill it into three words. The show is incredibly random. If I told you that we’ve got a show with a set made out of cardboard, reinterpreting a Hardy tragic novel, with noughties pop hits and an all-female cast, you’d just go, what the hell?  But all those random things somehow work together really well. I don’t understand how, and I guess it’s credit to Dorothy and her writing, and Hardy, but it works!

Three words? Cardboard…pop…finance? As you can see, the show is next week and we’re all going a little mad!

Casterbridge runs at The Space in London from 5 – 9 April. Tickets are available here. The play will also be livestreamed 7 April and on-demand streaming will be available for two weeks here.