CherwellIndependent since 1920.
Comment Sale of Blackwell’s: The long-term defence against Amazon 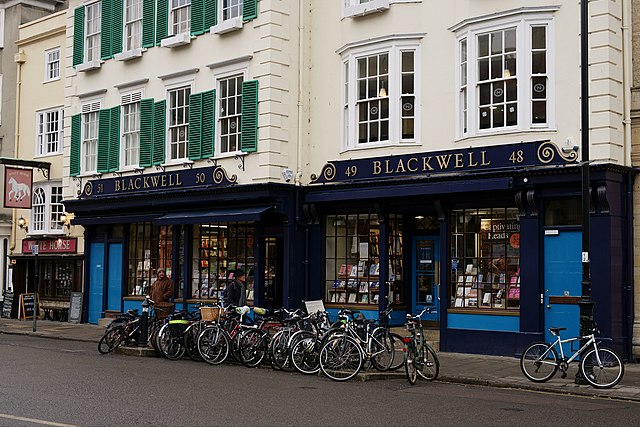 I think it’s safe to say that the majority of Oxford students have had some sort of experience with Blackwell’s; whether that be a quick browse to kill some time, or a disciplined scan of its bookshelves to finally get round to buying that book off the reading list.

I first went to Blackwell’s during my interviews, on the suggestion of a family friend who described it to me as an ‘iconic landmark of Broad Street’, and I soon realised why. On approach, the shop seems antique with its navy façade and bold lettering – its appearance is far from the more established bookshop chains such as Waterstones. This impression continues on the inside; the quaint front of shop hides a large but still charming interior, maintaining a welcoming, family-owned feel. In other words, almost as soon as I stepped in, it felt more authentic than some of its more mainstream rivals and for many, including myself, this atmosphere is the bookshop’s unique selling point.

When it was announced at the beginning of March that Blackwell’s had been bought by Waterstones, it triggered a real mixture of reactions and emotions: disappointment, frustration, but also a sense of understanding and a reluctant acceptance of the position Blackwell’s found itself in. The Dublin-based independent Gutter Bookshop tweeted that the deal felt “sad and inevitable but hopefully it’s also an opportunity to keep Blackwell’s alive.” Meanwhile the Green Party Peer Natalie Bennett viewed it as yet another example of a fallen family-owned bookshop, a victim of the giant companies which continue to dominate their sectors, furthering the homogenisation of our economy.

What Natalie Bennett crucially highlights is the current nature of the book-selling industry, an industry in which physical bookshops, particularly independent ones, are struggling to survive in light of the growing dominance of online retailers like Amazon – a narrative we are now well familiar with. Indeed, this sale is being framed by both Blackwell’s and Waterstones spokespersons as a protective measure and a necessary decision to keep Blackwell’s alive and running. Blackwell’s was a fairly predictable target for Waterstones. The business had made repeated losses in recent years, according to accounts published by Companies House, and had net liabilities of £3.8mn in the year to January 2021. After attempts at refinancing and their failed move towards employee ownership, seeking new ownership was their only real option in order to remain competitive in the industry. It is certainly possible to view this sale as further evidence of the increasing homogenisation of the global economy and the continuing trend of larger companies creating monopolies in their sectors by squashing smaller competitors. However, as David Prescott, the chief executive of Blackwell’s put it, the sale is the best way to “secure the long-term future” of the business whilst ensuring that the physical bookshops are not forced to shut.

Acquiring Blackwell’s also fits neatly into Waterstones’ strategy to combat online forces such as Amazon. Back in 2018, they bought family-owned chain Foyles with a similar arrangement. They have continued to target several independent booksellers, ending their family ownership with the promise that it might help them survive in the long-term as online bookselling continues to dominate. It is tempting to view this acquisition as a regrettable end to the 143 years of family ownership of Blackwell’s, but strategies like this are perhaps the sector’s best chance of survival in the battle for dominance with online rivals. Even I, on some of my trips to Blackwell’s, find myself holding back and thinking ‘maybe I shouldn’t buy this now, I could probably get it for cheaper on Amazon’. These acquisition models could secure the long-term future of physical bookshops and allow them to keep their pride of place on our high streets.

Importantly, it has already been announced that Blackwell’s will continue to trade under its own brand, pacifying many loyal customers, but the veritable consequences of this sale are still yet to be seen.The question of the buying experience returns; will this acquisition result in noticeable changes to the consumer’s buying experience in Blackwell’s? Many choose to make their book purchases from smaller, independent bookshops precisely because the buying experience is often more personal – and a large part of the anxiety surrounding this sale is centred around the concern that Blackwell’s might lose what makes it stand out from other commercial chain bookshops. There is a certain joy at browsing the shelves and displays of independent bookstores and reflecting on the individuality of the owners.

Whenever I entered Blackwell’s in the hour’s break I had between tutorials nearby, I always discovered some new and original display, such as the mystery books display where books were concealed in brown paper with a label attached describing it in a few words. It is different ideas like these which makes us associate phrases such as ‘independent’ and ‘family-owned’ with valuable buying experiences. Blackwell’s is still a chain, with 18 shops spread throughout the UK. I remember my surprise at walking through the centre of Newcastle and spotting one across the street. However, the Blackwell’s franchise is certainly not as extensive as other chains such as Waterstones, allowing it to successfully retain its individuality and charm. I think the reason that we cling onto this idea of the ‘independent’ and ‘family-owned’ bookshop as an ideal and lament their loss is because we are desperate to hold onto what they represent – the individual or the family over the large corporation. Although larger chain bookshops have their own advantages, it is this want for the original, personal buying experience which is driving the desire to keep independent bookshops and physical bookshops alive, despite the rise of online book retailers. How long this lasts, however, is yet to be seen.

Ultimately, the sale of Blackwell’s represents the sad but necessary reality of industry today and the need for adaptation in this hostile market. If we want to keep physical bookselling alive, and avoid the complete supremacy of online retailers like Amazon, we need to adapt. Agreements like that with Waterstones, although uncomfortable, could be the long-term future of this industry. This will probably not be the last family-owned bookshop to yield to this acquisition model, falling back on the ‘if you can’t beat them, join them’ mentality. What remains to be seen is whether Blackwell’s succeeds in retaining its unique identity, its ‘family feel’ in the future – the basis of much of its success. For the many Blackwell’s devotees out there, let’s hope it does!